My Friends Suspected Me of Spying for Israel 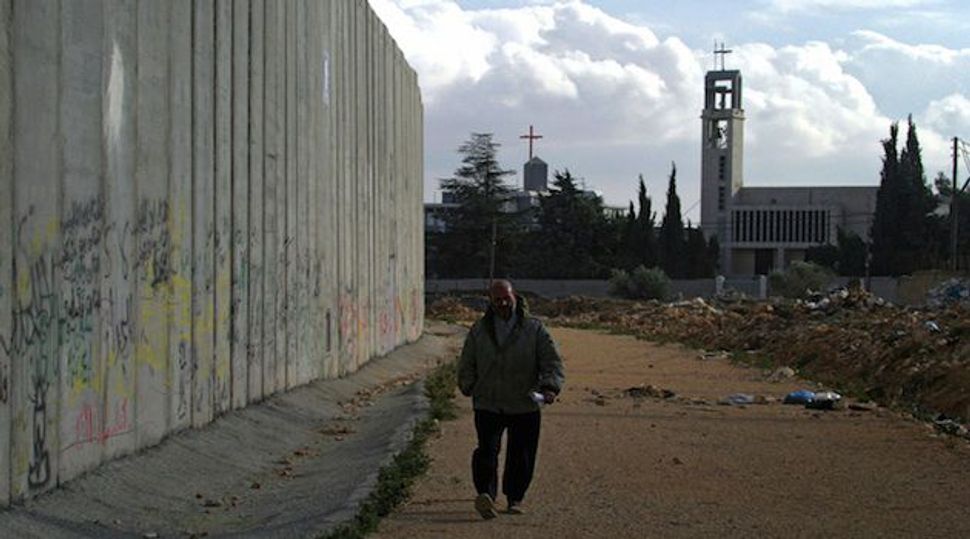 A Palestinian worker passes near the Aida refugee camp on December 21, 2005. / Getty Images

Reading the recent reports about Jewish American spies like Robert Levinson and Alan Gross, I can’t help but think back on my own experiences in the Middle East.

A friend and I lived and volunteered in the Aida refugee camp, just outside Bethlehem, for several months after graduating high school. It was a great and memorable experience for both of us, but living in tense regions of the world has more downsides than just poor resources and facilities, which are to be expected. There is also the almost constant fear that your own friends might be suspicious of you.

One night there was a loud thump on the front door of our home, as if someone had thrown a large stone or possibly a brick. It was followed by a louder thump, another bang and then a few seconds of calm. My friend and I quickly, almost instinctively, grabbed the largest kitchen knives we could find and ran, knives in hand, to the front door.

Only a few days earlier, we had learned that a considerable portion of the Aida refugee camp wrongly suspected us of being spies for Israel. The thought made us tense and uptight, ready at any moment to jump into fight-or-flight mode.

It turned out that the thumps on our door — which later subsided to a quiet, paced ping — were caused by a young girl across the alleyway sitting on her windowsill and trying to have some fun by throwing stones and olive pits at our home, which gave us a good laugh afterward. But we were growing increasingly paranoid — and for good reason.

As much as I love traveling through the Middle East and sincerely enjoyed my time in the West Bank (enough to keep returning and encourage others to visit as well), that Arabic J-word — Jasus, meaning “spy” — has unfailingly and consistently plagued my travels. From Palestine to Jordan, and even a bit in tourist-friendly Morocco, it seems to follow me. Supposedly this is not uncommon for Americans and particularly for Jewish Americans traveling through the region.

In the refugee camp, a Palestinian friend confirmed my suspicions that many people there believed I was a spy. But he added that, unlike them, he understood that Israeli intelligence was not so naive as to send an informant named “Michael Kaplan” into a refugee camp.

It seems reasonable for my friend, who was of notable political stature in the camp, to have surmised as much. First rule of being a spy is to fit in — or so we thought.

But as more details of the Levinson fiasco unravel, it would seem that not everyone in the CIA has caught on yet.

In a region of the world already so suspicious of foreigners, and especially Jewish travelers, the decision to send an informant so identifiable was highly irresponsible. It makes the region, with a renewed legitimization of local suspicions, more dangerous for all of us.

Much has already been made of the whole operation, with criticisms coming from all directions. The team of three deemed responsible for sending Levinson into Iran in the first place was disciplined for their actions (fired, though swiftly rehired in other departments). It’s unclear whether the upper echelons of the CIA were truly unaware of the covert operation, or whether they are trying to play down their knowledge of it.

What is clear, however, is that far from making the world a safer place, this whole fiasco has probably made the region more dangerous for foreigners and Jews in particular, legitimizing the already-widespread paranoia and fear of the locals.

Since September 11 and the globalization of the “War on Terror,” a number of Jews have been taken hostage in the Middle East – Ilan Grapel in Egypt and Daniel Pearl in Afghanistan immediately come to mind. Talk to many Jewish war correspondents and they’ll tell you that the one thing they conceal is their Jewish identity.

This case, however, will provide the first confirmed reports that the paranoia endemic in the region might actually have some basis. It should leave us travel enthusiasts and journalists concerned about blowback, and aware that suspicions in the region, more than a decade strong, will carry on into the future. Even if locals find no other examples to point to for proof of their concerns, Levinson’s case will always be there.

My Friends Suspected Me of Spying for Israel