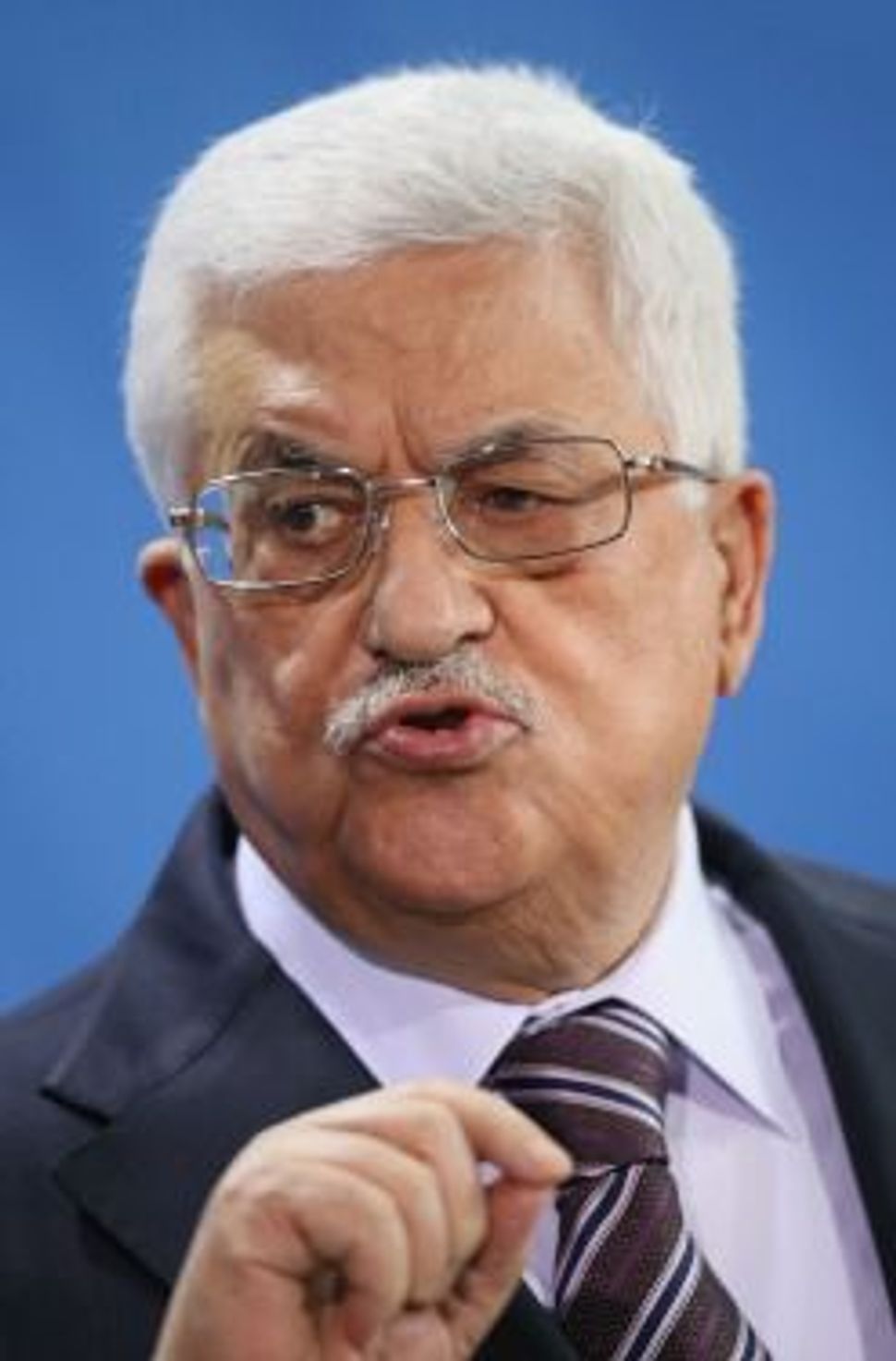 The background: Palestinian Authority president Mahmoud Abbas, in a taped interview to be screened this week at a Tel Aviv conference, declared that the Palestinian goal is full peace between the state of Israel and a Palestinian state along the 1967 borders, with the Palestinian capital in East Jerusalem.

Speaking in Arabic (subtitled in English and Hebrew), Abbas said that the transition period for Israeli withdrawal could be as much as three years, but that “those who speak of 10 or 15 years don’t want to withdraw.” He said that Israeli troops would not remain on Palestinian territory, but that NATO troops could be put in their place to secure the borders.

The interview is to be screened at the annual conference of the Institute for National Security Studies, the Tel Aviv think tank formerly known as the Jaffe Center of Tel Aviv University. The interviewer is attorney Gilead Sher, who served as chief of staff and chief policy adviser to onetime prime minister Ehud Barak. The two-day conference opens on Tuesday.

Institute president Amos Yadlin, former IDF chief of military intelligence, addressed a pre-conference press briefing today (English, Hebrew) to present the institute’s annual Strategic Survey. He said that the odds of reaching a peace agreement with the Palestinians in the coming year are not high, but that the risks of avoiding the difficult decisions required for an agreement are greater than the risks of taking those decisions.

If no peace agreement is possible, Yadlin said, Israel should consider taking unilateral steps to withdraw from the West Bank. He said crucial lessons had been learned from the 2005 unilateral Gaza withdrawal, and a unilateral West Bank withdrawal need not repeat the mistakes of Gaza.

One of most striking aspects of today’s news coverage is the stark difference between English and Hebrew language versions of the reporting:

The Jerusalem Post, reporting in English on Yadlin’s briefing today, leaves out a critical point that appears in Ynet’s Hebrew version about the relative risks to Israel in making the hard compromises for a peace agreement versus not making them.

A smaller but equally important discrepancy appears in Ynet’s own English and Hebrew accounts of the Abbas interview. In the Hebrew account notes that (as the video interview itself makes clear) Abbas spoke of the clause in the Arab Peace Initiative on resolving the Palestinian refugee problem, which calls for a “just and agreed” resolution based on U.N. Resolution 194.

The English version leaves out the words “just and agreed” and simply refers to Resolution 194. As former Jordanian foreign minister Marwan Muasher recalls in his 2008 memoir, “The Arab Center: The Promise of Moderation,” he had fought hard to have the word “agreed” included in the initiative, to make it clear that whatever resolution was reached to the refugee problem, it would have to be one that Israel agreed to—essentially meaning a repatriation of a small, largely symbolic number of refugees, with compensation for the rest.

U.N. Resolution 194 is often described as calling for the “right of return” of “the refugees”—presumably meaning all of them—to their former homes in what is now Israel. In fact, the actual text of the resolution says nothing about a “right” to return. It says that those refugees “wishing to return to their homes and live at peace with their neighbours should be permitted to do so at the earliest practicable date,” with compensation for those who don’t return. Those two qualifiers—“live at peace” and “earliest practicable date”—are the key to understanding how Israel can live with 194.

More on the Abbas interview: He said that Hamas would not be an impediment to a peace agreement, since he has a signed agreement with Hamas under which the Islamist organization consents to the conduct of negotiations aimed at achieving a Palestinian state within the 1967 borders and agrees to conduct its continuing opposition to normalized relations in the form of non-violent “popular resistance.”

He also called on the Israeli public repeatedly to seize the opportunity offered to Israel in the Arab Peace Initiative—whose terms he echoed in the interview—for full, normal diplomatic relations with all 57 Arab and Muslim countries “from Mauretania to Indonesia.”