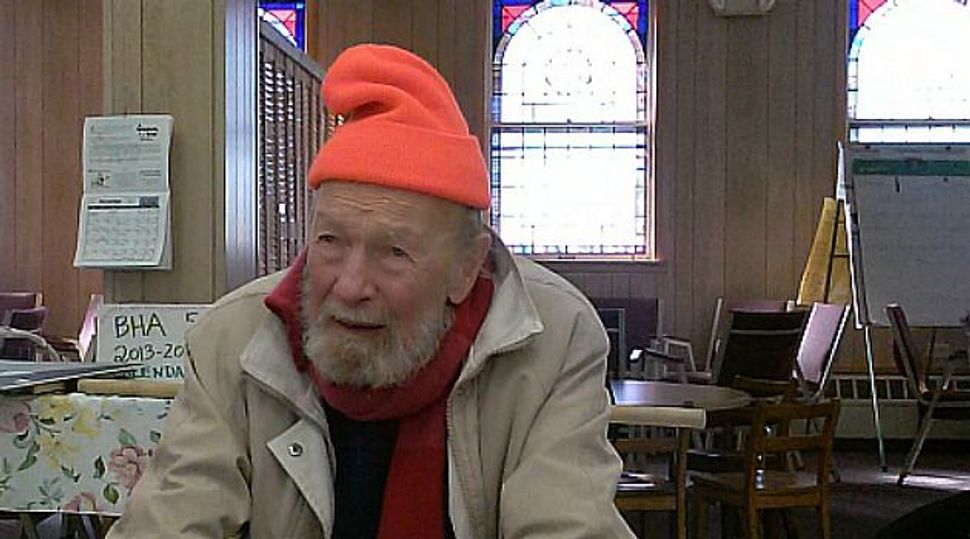 Pete Seeger never stopped singing — or fighting for justice. Just last month, he turned up at the Beacon Hebrew Alliance to explain why it was important to join the town’s Martin Luther King Day celebrations.

If you move to Beacon, or even think about moving to Beacon, someone will tell you that this is where Pete Seeger lived.

It was shocking to realize that the icon Pete (who was known to everyone as Pete), was also the old man on line at the post office, on Main Street, at the riverfront.

Ellen Gersh, the cantor at Beacon Hebrew Alliance, grew up in Beacon and has known Pete for her entire life. She met him as a child because her grandfather was friends with Pete’s father-in-law and then later, she got to know him through music.

“When I was eight or 10 years old, we were on a class trip to the Clearwater (Revival) and he heard me sing and invited me to sing at the Sloop Club,” she said. “The meetings were on Friday nights and that was a conflict [with Shabbat], but my father said I could go to the first half and then needed to go to services.”

It seems that for Pete, it wasn’t about the music as much as it was about the community that comes together around music. At the beginning of “Rise Up Singing”, Seeger writes “Once upon a time, wasn’t singing a part of everyday life as much as talking, physical exercise, and religion? Our distant ancestors, wherever they were in this world, sang while pounding grain, paddling canoes, or walking long journeys. Can we begin to make our lives once more all of a piece?”

In Beacon, Pete was a regular presence at the Pumpkin Festival and the Spirit of Beacon Parade and all the little celebrations that make up the public social calendar of a small town. He’d happily be strumming his famous banjo with a few dozen kids around him and a larger ring of parents (including me) making awestruck cell phone videos.

At least around here, he was more of a song leader than a performer. The medium of everyone joining together in song was his message of dignity of every person, of every voice.

“The Pete I knew was really was involved in the schools here,” said Cantor Ellen. “He played with kids because he was blacklisted and couldn’t perform elsewhere. He realized that social music was dying, that people don’t sing anymore since the invention of the phonograph.”

In the spirit of community singing I organize a monthly adult sing along even though I can’t carry a tune. After a community meeting, I was complaining to him about my lack of musical leadership skills and he said, “It doesn’t matter if you can sing; it matters if you can bring other people together to sing.”

The old-timers in my community remember that he played with Rabbi Shlomo Carelbach here at the synagogue, and Cantor Ellen remembers him coming to her bat mitzvah in the mid-1960s.

The last time Pete was in the synagogue was just a few weeks ago, in December. He spoke to our interfaith group, urging broader participation in the Martin Luther King day celebrations, and because of him, we did.

Rebbe Nachman teaches that every person has a tune within them, and only one who can hear the tune of every person and bring them together into one song is fit to lead the community in prayer.

Brent Spodek is the rabbi at Beacon Hebrew Alliance.