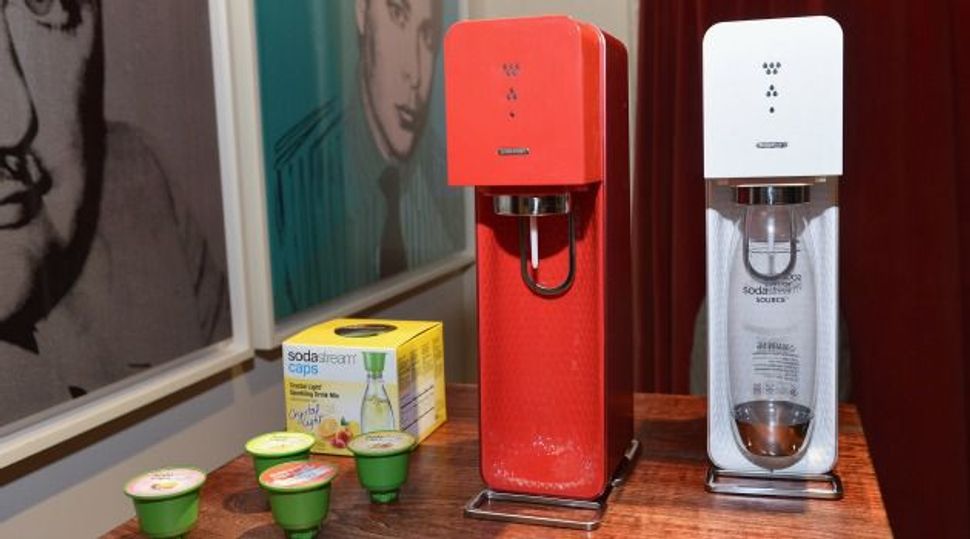 In addition to the Scarlett Johansson Super Bowl ad, part of the reason that SodaStream has gotten so much attention — as opposed to many other products on the boycott Israel list — is because it presents an ethical conundrum for its lefty customers. SodaStream has become a symbol for health and environmentalism, but also for the Israeli occupation of the West Bank.

In other words, if you want to make your soda at home, but you’re also a BDS adherent — or even if you’re practicing limited, West-Bank-only BDS — you’re mostly out of luck. As a recent New York Magazine story pointed out, “Even the most fervent anti-Zionists will admit that, for seltzer addicts, SodaStream’s competitors leave something to be desired.”

But what happens if you’re a SodaStream detractor who happens to own a SodaStream — whether by dint of a gift, or a purchase made previous to a political awakening (or maybe even a guilty one-time acquisition)? Rather than toss their seltzer makers, some SodaStream owners are taking a cue from hackers who have figured out how to use the machines without continuing to support the company by buying its CO2. For the hackers, it’s all about saving money — a SodaStream CO2 cartridge, which must be replaced every two to four months, costs between $15 and $45. For the anti-occupation SodaStream owners, on the other hand, it’s political.

One such SodaStream owner is Daniel Sieradski, a Jewish activist and writer. At the height of the Scarlett Johansson debacle, Sieradski Tweeted about his own seltzer maker. “Just a reminder, I own a Sodastream and have absolutely zero problems with them other than the fact that they have a plant in the West Bank,” he wrote on January 31. “But until the (sic) move their plant, I will be using my own CO2.” Sieradski, who declined an interview request by the Forward, linked to a web site called Critical Paintball, which sells a metal adapter that can be screwed onto a paintball CO2 canister to be used in place of the SodaStream cartridge. The kit costs $59.99. Unlike SodaStream cartridges, the paintball canister is reusable and can be refilled for $2 or $3.

Unable to reach Critical Paintball, I emailed another web site, CO2Doctor, which is selling a similar kit to hack the SodaStream. The site’s sales manager, Dann Johnson, declined my interview request: “…I am concerned that we will somehow get caught up in the ongoing turmoil surrounding the Sodastream boycott movement which we have no interest in participation, for or against,” he wrote. “If anything, anything detrimental to Sodastream’s success is ultimately detrimental to us since we rely on their success as a means of obtaining success for our product offering.”

Other SodaStream hackers have gone even more rogue, figuring out how to use the SodaStream without purchasing new hardware at all. One YouTube video demonstrates how to crack open the SodaStream CO2 cartridge, fill it with dry ice, and reseal it for use in the machine.

Then there are those who game the system by hoodwinking SodaStream. According to New York Magazine, when journalist Ali Gharib told his cousin about SodaStream’s West Bank factory, the cousin launched a year-long “‘subversive campaign’ to undermine SodaStream’s business model by using the gas cylinders, then mailing them back to the company claiming they’d been defective and receiving free replacements in return.”

What these hackers teach us is that, for BDS-following seltzer drinkers, yes, it’s possible to have your SodaStream and drink it too.