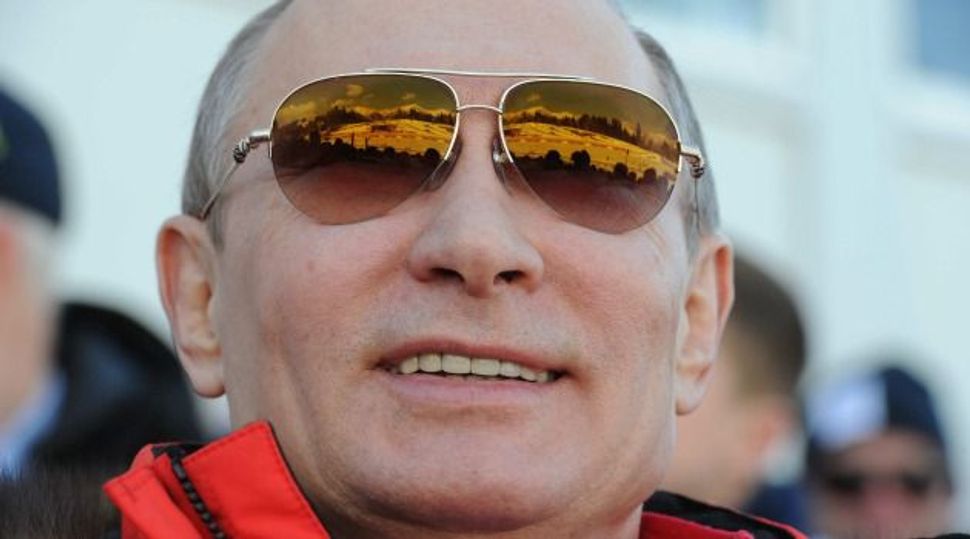 For the past two years, human rights activists have decried the conditions of the Sochi Olympic games, which wrap up this week, often to deaf ears. They’ve reported accounts of migrant workers being abused, environmental laws being trashed, billions of dollars being embezzled, and, of course, the ban on gay “propaganda” which threatens with jail time anyone who flies a rainbow flag.

American news cycles being what they are, it was hard to sustain much interest. It didn’t help that the International Olympic Committee repeatedly swept these problems under the rug, failing to investigate the corruption, failing to uphold its own principles of nondiscrimination, and failing to say anything more meaningful than the platitude that the Olympics are not “political.”

For a while, it looked like the Games would turn out just as Vladimir Putin wanted: a showcase for the new Russia and a celebration of his rule.

If they are remembered at all, surely this year’s Olympics will be remembered for their many fiascos: the unsafe race courses, the lack of snow, the hotels without working plumbing. Indeed, the enduring symbol of the 2014 Olympics is likely to be the ring that failed to unfurl during the opening ceremonies. In the gay community, the joke is that the ring was gay and afraid to come out.

So, those same activists who complained to empty rooms about Russia’s political abuses are now savoring Russia’s embarrassment. Of course, all of us feel for the athletes whose moment of achievement was tarnished by the logistical mishaps or political pall. And, to be sure, there have been plenty of awesome Olympic moments despite them. But you’ll forgive us activists if we take some schadenfreude in the #sochiproblems.

Really, though, the two sides of the Olympics — politics and logistics, the real and the ridiculous — are connected. The same cronyism and corruption that made fifty billion dollars disappear are also responsible for the consolidation of Putin’s power and the erosion of civil society. The same ignorance that prompted the mayor of Sochi to say there are no gay people in his town — in fact, there are two gay bars — has caused thugs elsewhere in Russia to equate homosexuality with pedophilia, and torture gay men on video.

These Olympics were, as members of Pussy Riot said when they were arrested in Sochi on February 17, a “political event” meant to show that Russia is ready for prime time; that it is a powerful, Western-but-not-Western society; that it belongs on the top tier of nations.

Instead, it showed the opposite: that Russia is ruled by an autocrat who doles out massive favors to supporters, forces through ludicrous projects that would make its former Communist leaders jealous, quashes dissent and panders to backward values.

Of course, Putin and his supporters do not represent all of this vast country. There is also a large, educated population in Russia, and a proud culture that values intellectual as well as economic achievement. One need only look at the Russian-speaking Jewish community here in the United States for evidence. But for the moment, Russia is ruled by vulgarity and avarice, not sophistication and reason. And all of its grand, Gogolesque absurdity was on display these last two weeks.

What’s worrying is what happens next. Soon, the lights will go out in Sochi, and bogus, state-run investigations into the missing billions will take place far away from international scrutiny. Meanwhile, experts project that the repression of civil society activists, foreigners, and LGBT people has only just begun.

Case in point: The follow-up to Russia’s “anti-propaganda law,” which would strip children from same-sex families, even if one partner is the child’s biological parent. This law was proposed in the fall and temporarily shelved until after the Olympics. Expect it to come back, and pass.

And expect Russia’s other laws — requiring most nonprofits to register as spies, banning civil discourse on a host of issues — to be enforced as never before. Several times over the last year, President Putin has personally intervened to stop prosecutions under these laws. Obviously, he didn’t do so out of the interest of civil liberties; he did so to minimize criticism before the Olympics. Now, anything goes.

One of the most beloved characteristics of Russian culture is its dark, even despairing sense of humor. In the wake of centuries of corruption (and bad weather), Russians have grown fatalistic and cynical. This is one reason the Russian response to the #sochiproblems meme and other Western expressions of incredulity was a mixture of defensiveness and anger, as if to say, we put up with this all the time.

But there are real lives at stake, and it’s hard to affect cynicism when you’re being beaten up by thugs. No, Russia is not the only country which persecutes gays, foreigners, and activists. But it is the only one to have hosted an Olympics this year. And we’ve all seen how well that went.