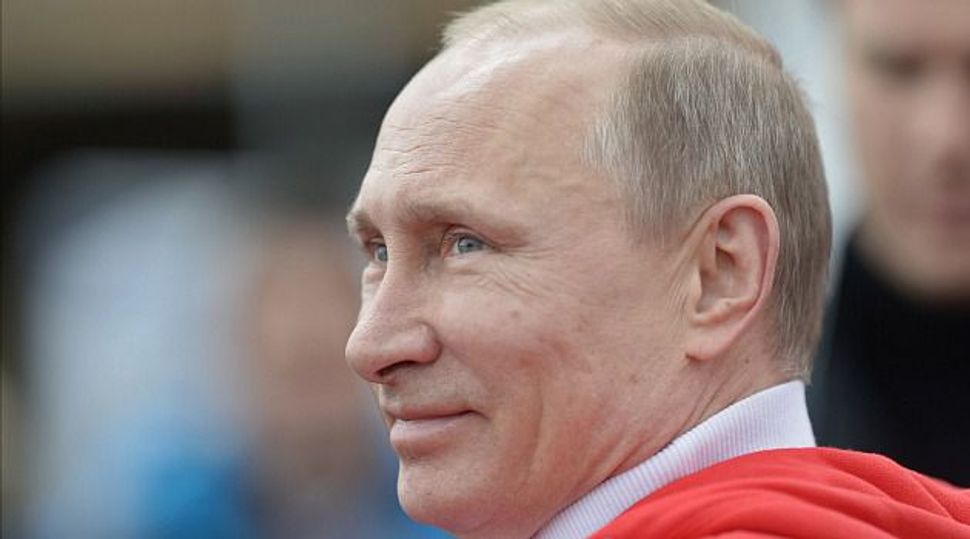 The Kremlin has issued more condemnations of anti-Semitism in the past week than in the preceding decade. The danger of anti-Semitism was on the lips of the Russian Ambassador to the United Nations, Vitaly Churkin, Foreign Minister Sergei Lavrov, and President Vladimir Putin himself.

Not Russian anti-Semitism, of course. It was Ukrainian “Neo-Nazism, fascism and anti-Semitism” that raised the Kremlin’s indignation. President Putin even cited the destruction of Orthodox churches and synagogues as a reason for the continued presence of Russian troops in Crimea. (There has been no such destruction.)

On Russian television, the language has been crude: The leaders of the new regime are all simply Nazis. The West either ignores this fact out of blindness and naivite, or has knowingly allied itself with Nazis in a campaign to weaken Russia. (This line of propaganda is taken straight out of an old Cold War playbook.) In a television interview, writer and journalist Alexander Prokhanov warned darkly: “I’m especially astonished by the Jewish organizations that support this Maidan. Don’t they understand that they are helping bring on a second Holocaust?”

A Kremlin-backed organization named “World without Nazism”, headed by Russian-Jewish mini-oligarch Boris Shpigel, has been a vocal participant in this campaign. In early February, its heads met with former Ukrainian President Viktor Yanukovych in a show of support for his embattled presidency. Shpigel, a former member of the Russian parliament, urged Yanukovych to stand tall against the forces of “extremism and neo-Nazism” that were demonstrating on the streets of Kiev. “World Without Nazism’s” website is full of articles about the specter of Ukrainian neo-Nazism. It has no content on neo-Nazism in Russia.

The Chabad-run Federation of Jewish Communities of Russia has voiced a more sophisticated version of “World Without Nazism’s” position.

The goal of the Kremlin’s propaganda campaign is to weaken public support for the Ukrainian revolution in Europe and the United States by “playing the Jewish card” and conjuring up images of pogroms. It is based on the assumption that Jews are well-represented in the opinion-making elite of the US, and that the European Union is deeply sensitive to Holocaust memory, xenophobia and racism. Since anti-Semitism has figured prominently in Ukrainian history, and the junior partner in the revolution, the Svoboda party, is in fact anti-Semitic, the campaign has just enough basis in reality to dampen Western support for the new regime in Kiev.

The Jewish situation on the ground differs widely from the Kremlin’s phantoms. Last week, the All-Ukrainian Jewish Congress conducted a conference-call with leaders from 29 Jewish communities across the country, and asked whether there had been a rise in anti-Semitism. 27 communities reported that the situation was calm and normal, 2 communities (Sevastopol and Vinnitsa) expressed concern about anti-Semitic statements emanating from… Russia and pro-Russian groups.

The Ukrainian interim government is a mixed bag. Most of its 22 ministers are from the mainstream, liberal Fatherland Union. 4 ministers are from Svoboda, and one of its three deputy prime ministers is Jewish — former Vinnitsa mayor Vladimir Groisman. Groisman was reelected for his second term with an astounding 78% of the vote. (So much for ubiquitous Ukrainian anti-Semitism).

During his time as mayor, he helped establish business ties between Vinnitsa and Israeli firms. Perhaps more important is the appointment of Jewish oligarch Igor Komoloisky as governor of the Dniepropetrovsk province. Kolomoisky is chairman of the Dniepropetrovsk Jewish community and has funded construction of a Jewish community complex in the center of town. He also has Israeli citizenship. Both Groisman and Kolomoisky are vocal supporters of Maidan.

Their appointment was no accident. The new Ukrainian authorities know that they have a serious public relations problem, and are eager to fend off charges of anti-Semitism. This was also the background for the meeting by the head of one the most extremist Ukrainian nationalist organizations, “Right Sector”, with the Israeli ambassador in Kiev. Dmitry Yarosh assured the ambassador that his organization was opposed to anti-Semitism and was ready to protect Ukrainian Jews from attacks. Politics makes for strange bed-fellows. Right now, even “Right Sector” knows that anti-Semitism is a liability for their cause.

Faced with the incongruity of Ukrainian Jews in positions of power under the Maidan-led regime, Russian TV has not given up. It has portrayed Kolomoisky as a Jewish gangster who secretly finances the Nazi Svoboda-party. When a Jewish apologist for the Kremlin declared on a political talk show that Kolomoisky was proof that “there are Jewish scoundrels”, the studio audience in Moscow roared with applause. (The remark was the top applause line of the program.)

It makes you wonder which country has more anti-Semitism. Actually, sociological studies indicate that Russia and Ukraine are about even, and lagging far behind countries like France and Austria.

The next stage in Moscow’s “playing the Jewish card” is about to unfold. The Kremlin is backing the candidacy of former Kharkov provincial governor Mikhail Dobkin in the Ukrainian presidential elections, slated for May 25.

Dobkin is a loyal backer of Putin. He is also Jewish — and has virtually no chance of winning the election. But that’s not the Kremlin’s goal. Their goal is to sow discord and dissention in Ukrainian society. And to drive a wedge between the new regime and the West

. You can be sure that once the Dobkin-campaign declares the Maidanists “Nazis”, there will be Ukrainians who will call the Moscow stooge a “zhid”. And the Jewish question will occupy center-stage, in a country with under 100,000 Jews.

David E. Fishman is Professor of Jewish History at the Jewish Theological Seminary of America, and Senior Research Fellow at YIVO. He directs JTS’s program in the former Soviet Union, “Project Judaica.”