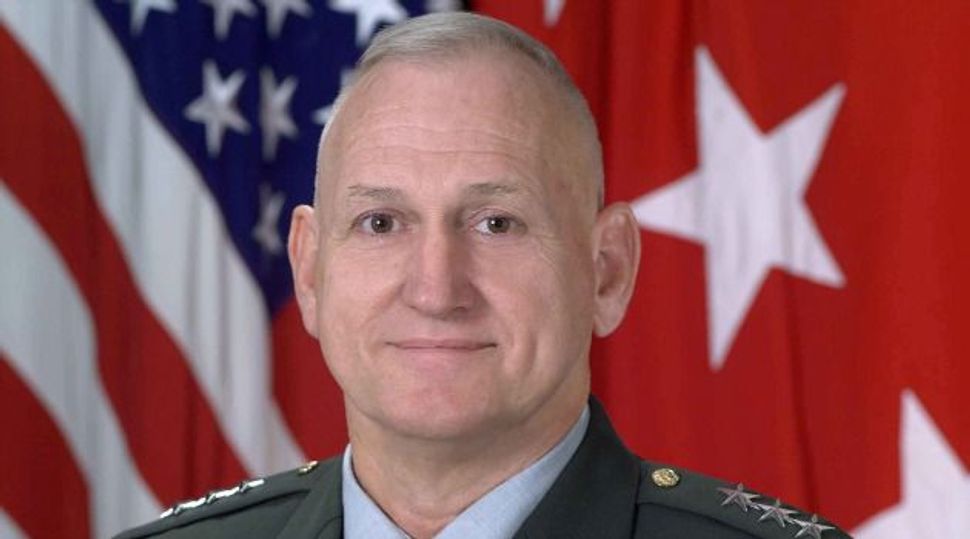 William “Jerry” Boykin, a retired general and Christian conservative, has come under fire after telling an Israeli reporter that Jews are “the cause of all the problems in the world,” in what was seemingly an awkward attempt at humor. Boykin, executive vice president of the right-wing Family Research Council, who is widely known for his anti-Muslim advocacy, also told a reporter that Obama secretly sides with Al-Qaeda and sent “subliminal messages” of support to Muslims during his well-publicized appearance in Egypt in 2009.

The “hot mic” remarks were made following a speech at the National Security Action Summit, held just a few blocks from the Conservative Political Action Conference this past weekend. Boykin spoke at a panel entitled “Benghazigate: The Ugly Truth and the Cover-up.” The video feed for the live webcast went dark but its audio continued running and the off-air remarks are now available on the Southern Poverty Law Center’s website, which first covered the story.

Boykin can be heard accusing Obama of secretly sending messages of support to Egyptians during his famed 2009 speech in Cairo. “If you understand anything about Islam,” he said, “there are subliminal messages.” He asserted that Muslim extremist groups have taken advantage of the supposed unbending support of the American president, confident that he is “unwilling to go against them.”

After Boykin’s remarks about Obama’s supposed unrelenting support for Muslims, a reporter from Israel’s right-wing news site IsraelNationalNews.com approached him and requested a brief interview. Jokingly, Boykin accused Jews of causing all of the world’s problems. The reporter responded, “I know, I know, that’s why we’re trying to fix everything.”

Boykin is no stranger to controversy. He’s gained a reputation for saying whatever is on his mind. He used to serve as a senior military intelligence official for the Pentagon, but lost that position due to his anti-Muslim advocacy and his insistence that America was engaged in a spiritual war. A 10-month Pentagon investigation revealed that he had violated military rules.

His often-obscure attacks against political opponents, including President Obama, have generally been received with distaste. In 2011, he said that many Jews are uncomfortable with the Republican Party only because they associate Hitler with the right. Boykin alleged that Hitler was actually “an extraordinarily off-the-scale leftist” and seemed to accuse Obama of organizing a Hitler-like Brownshirt militia. He also has argued that Jews should be converted to Christianity.

Last fall he again made headlines for saying that Jesus would return a gun-wielding warrior to fight to establish his kingdom on earth. The remarks were apparently made in an effort to advance gun rights and encourage gun ownership. “The sword today is an AR-15, so if you don’t have one, go get one,” he said. “You’re supposed to have one. It’s biblical.”

Yet his reputation for controversial and outlandish statements hasn’t totally sidelined him. During the election campaign in 2012, presidential candidate Mitt Romney received flak for meeting with the fiercely anti-Muslim Boykin. He is still occasionally asked questions about foreign policy by media outlets. Israel National News recently quoted him saying that America must militarily take out Iran’s nuclear program.