Trading a Palestinian Flag for a Kid’s Freedom? 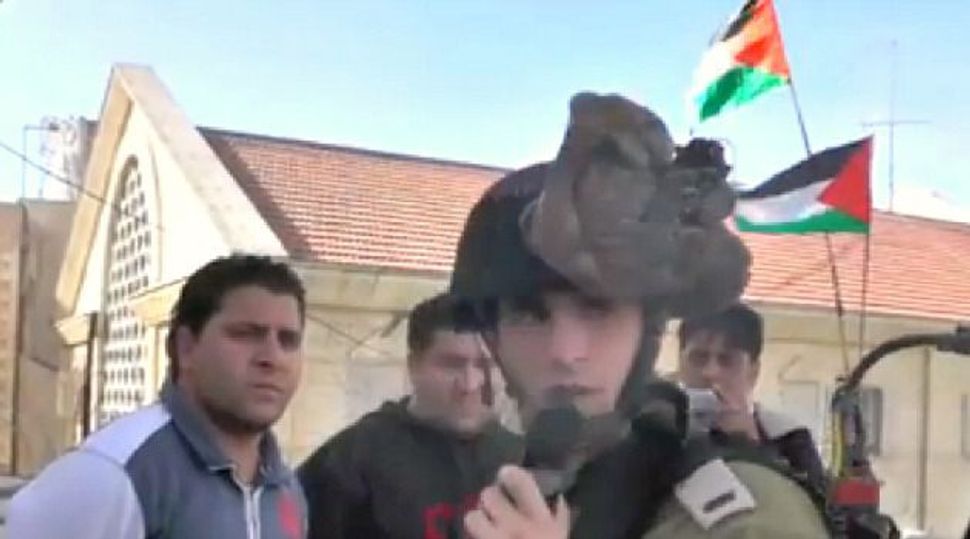 Last week I wrote about that wacky video of a Hebron settler climbing onto a Palestinian’s roof to steal his flag, getting stuck, and calmly telling the Palestinian that the roof, house, and everything within shouting distance actually belonged to the settler – that is: Israel. I posited that had the situation been reversed – had the Palestinian climbed onto the settler’s roof instead – the Palestinian would now be dead.

Rather than, say, arrest the settler for trespassing, though, soldiers responded to this absurd series of events by attempting to browbeat Shadi Sidr, the Palestinian in question, into handing over his flag. At various points, various soldiers insisted that flying the Palestinian flag was forbidden and that Sidr would be taken into custody if he didn’t take his down, but when he refused, at least one of them had the good sense to understand that continuing the farce in front of cameras was not a good idea. Later it transpired that the Israeli military in fact has no anti-flag regulation.

And that, you would think, was that.

Or, at any rate, you might think that was that if you had no experience with Israel and the occupation. Because of course that was not that. That was not even remotely that.

Israeli soldiers turned up for the second time on Saturday at a home in Hebron to order the removal of a Palestinian flag, even though the Israel Defense Forces said last week there is no policy against displaying flags.

Shadi Sider, a member of a Palestinian family living near the Jewish settlement enclave of Beit Hadassah, said the soldiers had arrested a neighbor for allegedly throwing stones and conditioned his release on the removal of the flag.

…“[The soldiers] arrested a youth who lives in the building, claiming he threw stones,” Sider said. “They said they would release the boy if we took down the flag. There was an important officer with them so we agreed and took it down.”

Needless to say, an IDF official has told the press that no such thing happened – well, okay, that kid was taken in for allegedly throwing stones, but he was released because, according to Haaretz, “he is too young to be criminally responsible. Convincing is all it took to get the flag removed, the [IDF] source said.”

And you know what? I don’t know. I wasn’t there. It’s possible that one or the other side of this story is lying through its teeth. It’s also possible that a solider made an unsanctioned remark suggesting that the kid would be released if Sidr acquiesced, or maybe a soldier said something which (under the rather stress-inducing circumstances) Sidr misinterpreted as meaning just that. We’ll probably never know exactly how the neighbor boy’s detention comes into the story.

We do know this, though: In its role as enforcer of the occupation, the Israeli military frequently arrests or detains young children. Sometimes very young children. Eight year olds, six year olds, five year olds. Often these children are handcuffed, kept from their parents, and/or abused while in custody. If you click here, you can see an Israeli Border Guard randomly attack a nine year old boy and start kicking him – and you can hear the sounds of abject terror that the little boy made.

Did any of these children throw stones? I don’t know. Maybe. Probably. If I were a child living a life like that, I might throw stones at the men with guns, too. And if I were an adult living in such a place, and someone even hinted that a child (“too young to be criminally responsible”) was being held as a kind of ransom in order to get me to give up my flag, I’d tear that flag from its pole and hand it over as fast as I could.

And here’s the other thing we know: This military, tasked with protecting the Israeli people and the Jewish State but more often than not given over to the brutal policing of an angry population – and far, far too willing to arrest grade school children – found it necessary to return to Shadi Sidr’s home, and demand his flag.

The flag against which there is no regulation. The flag that an Israeli citizen tried to steal from his roof, by climbing up the side of his house.

Trading a Palestinian Flag for a Kid’s Freedom?