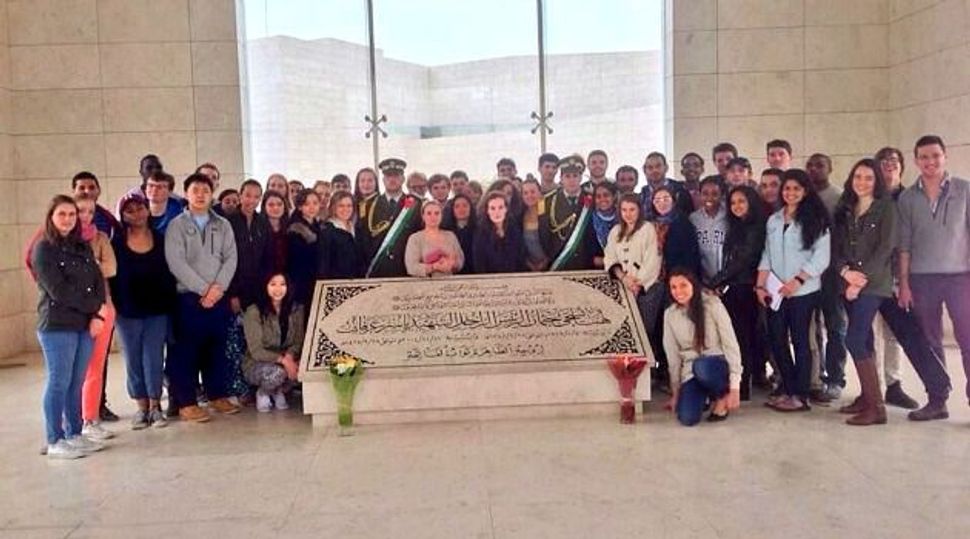 Last Monday, the Harvard College Israel Trek went to the Muqata’a, the offices of the Palestinian government, in Ramallah. While they were there, the group took a picture with Yasser Arafat’s grave, which was inevitably Tweeted by the group’s tour guide. The photo was picked up by two far-right blogs — one Jewish, one not — and then nailed down by the Jewish Press, which ran the provocative headline “Jewish Donors Funded Harvard Students’ Trip to Arafat’s Grave.”

The headline, of course, is ridiculous: The family foundations and Boston’s Combined Jewish Philanthropies funded a wide-ranging ten-day trip all over Israel for 50 of Harvard’s best and brightest, during which they spent half a day in Ramallah and 30 seconds for a photo shoot at Arafat’s grave.

But that’s not the point. The point is that allowing students to engage in conversation on the Israeli-Palestinian conflict with Palestinians themselves is still taboo among the American Jewish establishment. And it’s high time that changed.

First, let’s establish the obvious: These Harvard students were well within their rights — on purely touristic grounds — to visit even the tomb of a man as reprehensible as Arafat. Imagine going on an educational tour of Berlin and not stopping at Hitler’s bunker. Or trying to see the sites of a conflict like the American Civil War without taking a look at the Confederate Memorial Carving of Jefferson Davis, Robert E. Lee and Stonewall Jackson. Hitler killed 6 million Jews and 5 million others, but no one would argue that your visit to his bunker was meant to “honor” him. Davis, Lee and Jackson were considered war criminals in the North in their time, but no one is going to argue that you’re embracing their side of the Civil War at their monument. These students were not “paying homage” to Arafat. They were visiting a crucial site in the history of the Israeli-Palestinian conflict.

More importantly, there was context: In the lead-up to the trip, all 50 students read Ari Shavit’s much-discussed book, My Promised Land. Their first speakers were journalists: Jodi Rudoren of the New York Times and Like Dreamers author Yossi Klein Halevi. Only on day four of the tour did they meet the conflict face to face (after going to Yad Vashem on day three). On the day of the trip to Ramallah, they took a tour of the seam zone of Jerusalem, met with a settler in his home in Eli, and only then met with the PA representatives who took them to Arafat’s grave before they sat down to meet members of the Palestinian negotiating team. I’m sure they took pictures in and around Eli as well.

No doubt, Arafat is a despicable figure in the Jewish and Israeli worlds. Along with mass murder through affiliations with terrorism, he has been accused of immense corruption to the tune of billions of dollars likely stolen from his own people. But he is also the undisputed founder of the Palestinian national liberation movement. Had the Harvard group not visited his grave and not brought him into the conversation, it would have ignored the basic pedagogical imperative of generating critical conversation, and instead trapped everyone — Jews and non-Jews alike — in a state of what Ari Shavit calls “mutual blindness,” and preserved what Peter Beinart calls the self-insulating “cocoon” so comfortable for the American Jewish establishment.

Granted, breaking free of mutual blindness and the shelter of our cocoon isn’t easy. Immediately after visiting Ramallah, the group held a two-and-a-half hour debriefing session for the participants, in which the six Israeli group leaders — also from Harvard — discussed how difficult it was for them to stand by the grave of a man so evil in their eyes. Some of these Israelis had served in the army, and many had come of age in the era of the second intifada. One of them was an Arab-Israeli named Nuseir Yassin.

In an email, Yassin told me that he was “the last person to realize that what we did [going to the grave] would be super controversial.” “Growing up,” he wrote, “I was used to hearing the Palestinian narrative…Arafat as a martyr and a great Palestinian hero” and didn’t know “how Jews perceive him.” Even when Yassin “came to acknowledge the [Jewish] narrative,” he “remained fixed on the idea that exposing our students to this part of the Palestinian narrative is extremely important.”

“We did not go to Israel to draw half the picture,” Yassin wrote. “Forever proud” of the donors and the organizing team for the Trek, he recommended the group’s Medium blog for further reading.

The group also responded well to the criticism. It published an open letter on the Times of Israel website explaining some of the circumstances of the visit. Participants responded to the allegations personally, including on the group’s Facebook page. One post acknowledged how “one person’s lived experience neither negates nor diminishes another person’s lived experience… Understanding a shared humanity is the most basic requisite for peace,” signing off with “#israeltrek2014.”

These are unmistakably smart young people. They’re engaged in this conversation, and they have what it takes to think critically. When outlets like the Jewish Press and Israel Hayom attack a group like this for snapping a picture at Arafat’s grave, it only demonstrates their own willful blindness. Worse, they make it harder for thoughtful students like the ones on this trip to become what we all want them to become: constructive agents of change.