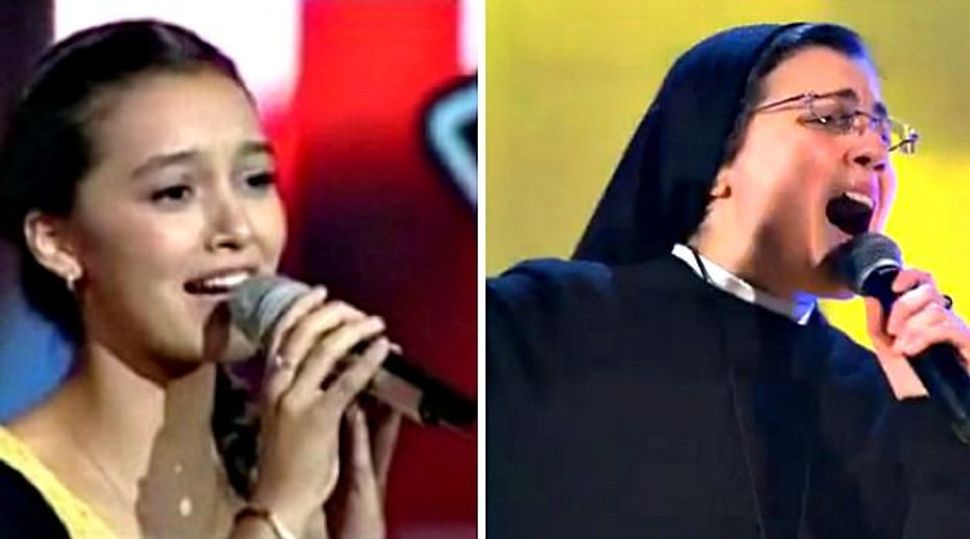 I’m not usually the type of person who goes in for reality TV shows. Especially not when they revolve around singing competitions, and especially not when one of their singers’ performances becomes an overnight Internet sensation, to be endlessly posted and reposted on social media.

So why did I feel compelled to watch a Sicilian nun singing a song by Alicia Keys on Italy’s ‘The Voice’ about a dozen times over the course of this weekend?

After giving it some thought, I realized it wasn’t the TV lover or even the music lover in me that drove my obsessive replaying of this video. It was the Jew — or, more specifically, the formerly Orthodox Jewish woman — that couldn’t resist its charm.

Strange as it may sound, watching 25-year-old Sister Cristina Scuccia belt it out on stage while a cluster of habit-clad nuns cheered her on from the sidelines, I couldn’t help but do a simple thought experiment: What if this were an ultra-Orthodox Jewish woman instead? Would she dare to sing like that in front of a mixed audience of men and women, knowing that her performance — her intimate voice — would be broadcast to millions more around the world? And would her ultra-Orthodox female friends stand there, cheering her on?

No way, I thought. Not in a million years. The reason why can be explained in two words: Kol Isha.

Literally translated as “woman’s voice,” Kol Isha refers to the Jewish rabbinic law that forbids men to listen to a woman’s singing voice for fear that it will result in sexual temptation. In practice, this law means that women in the Orthodox Jewish world are frequently barred from singing in public — especially in contemporary Israel, where rabbis have gone so far as to say that male soldiers should sooner choose death than stay at an army event that includes women’s singing.

The Kol Isha issue made headlines exactly one year ago when Ophir Ben-Shetreet, an Orthodox teenage girl, was suspended from school for singing on Israel’s ‘The Voice.’ Although her religious girls’ high school punished her for performing in front of men, she stuck to her guns and continued to compete, making it to the final round.

Ben-Shetreet, a modestly dressed observant young woman, didn’t see herself as a fractious rebel storming the castle of Orthodoxy. Just the opposite: She took pains to explain how it was her belief in God that helped her know what she was meant to be doing here on Earth. But the wider Orthodox community, it turned out, saw her very differently.

No wonder I was so moved by the sight of Sister Cristina’s intergenerational nun friend group cheering her on wholeheartedly — literally jumping for joy at her success. And no wonder I was so gratified to hear Sister Cristina confidently reply, in response to a judge’s query as to what brought her to this show, “I have a gift and I am giving it to you! Shouldn’t it be this way?”

Yes, I thought. It should.

Later on in the video, when that same judge asks her, “What does the Vatican say about you auditioning at ‘The Voice’?” Sister Cristina responds seriously, “Listen, I really don’t know.” And then she jokes: “I’m still waiting for a phone call from Pope Francis.”

At that spunky line, I can’t help but laugh. But I also feel a weird twinge of jealousy. Because, while it doesn’t seem entirely out of the realm of possibility for Sister Cristina’s singing to meet with a nod of approval (or at least winking disregard) from the higher echelons of the Catholic Church, I know with 100% certainty that her Jewish counterpart could never pull the same stunt without waking the lions of the Orthodox establishment.

Jealousy, as much as joy, is the reason I’ve had this video on repeat all day.

Sicilian nuns jump for joy at Sister Cristina’s success on ‘The Voice.’ / YouTube