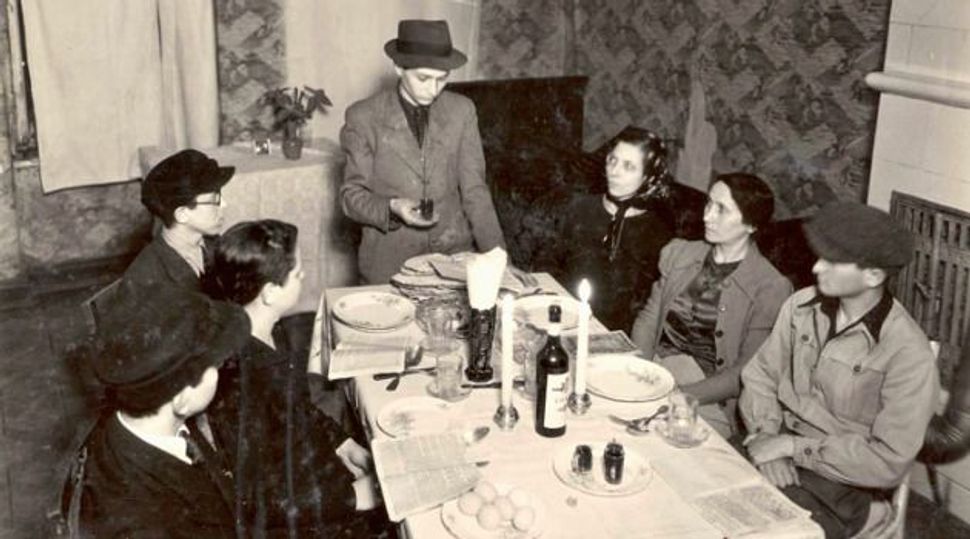 A Passover Seder in prewar Europe.

Every other spring, the Zionist-Socialist youth movement Hashomer Hatzair takes its bogrim, the group of usually 16-year-old leaders from around the world, on a weeklong trip to Poland. When it was my turn in 2006, the dates fell on Passover.

The nine of us from Vienna boarded a night train to Warsaw on the second or third night of Passover. Working together with the youth group had turned us into a tight-knit friend group, and we were excited about the trip that would reunite us with peers from across the globe.

The fact that we’d be visiting the places where many of our ancestors had perished – the Warsaw ghetto, Majdanek, Auschwitz and Treblinka – didn’t dampen our mood. We had grown up with the stories of our grandparents, many of whom had barely escaped Europe before the Holocaust, or survived in concentration camps or hiding. But even more importantly, the movement stressed the role of those who had been resistance fighters. After all, Mordechai Anielewicz, the leader of the Warsaw ghetto uprising in 1943, was a member of Hashomer Hatzair. We went to Poland first to celebrate our heroes; mourning our dead came second.

On the first night of Passover in 1943, the final, best-known phase of the Warsaw ghetto uprising began. SS and police entered the ghetto to deport the estimated 60,000 Jews to death and forced labor camps. The Jewish Combat Organization (ZOB), which was lead by 24-year-old Anielewicz and supplied by the Polish underground movement with weapons, was able to fight SS and police for almost a month. Anielewicz died in his command bunker, on 18 Mila Street, on May 8, and the ghetto was destroyed.

During our trip, Passover didn’t play much of a role. There was the optional matzo replacing a soggy roll in our lunch bags, which hardly anyone chose, but neither I nor any of my friends remember participating in any Passover ceremonies. I don’t know if that’s because they never happened – we were a secular movement, after all – or because our hormone-clouded teenage brains pushed them from our memories.

Besides, that year, there was no need to rehearse the ancient Biblical story. It was more alive than ever. Anielewicz was our Moses, the ghetto our Egypt, the sewers, through which some fighters escaped, our Red Sea.

Walking through the few remaining courtyards of former ghetto buildings and the so-called Umschlagplatz, where the deportation trains were loaded, imagining myself in the shoes of the resistance fighters seemed surprisingly easy – and almost desirable. I would stand true to the values of my movement, and be among the ones who fight. Plus, Anielewicz was one handsome-looking fellow, judging from the coarse black-and-white photograph, so my teenage mind already imagined me crouching next to him in the bunker, whispering command codes and preparing bullets.

That trip helped me find a way to deal with the agonizing question of what the plight-filled history of the Jewish people was supposed to mean to me. Pitying my ancestors or believing in a greater power that caused their suffering were two conclusions I had been able to draw, and neither seemed constructive to me. Anielewicz and his comrades shouted another, more appealing message from their bunker graves: Ask yourself how you would react if injustice happened to you.

It took me a few years to realize that Anielewicz only gave me part of the answer. Being victimized by a cruel regime can be a fairly abstract concept when you grow up in a comfortable middle-class life in a peaceful country. As I grew older, Anielewicz’s Passover message changed for me. Instead of asking myself whether I would become a resistance fighter if I were being treated unjustly, I questioned how I would react when injustice happened to someone else. Rather than imagining myself as Anielewicz or Moses, I see myself as a passer-by of the ghetto wall or the pyramids, and I remind myself that I need to look out for them and act every day of my life.