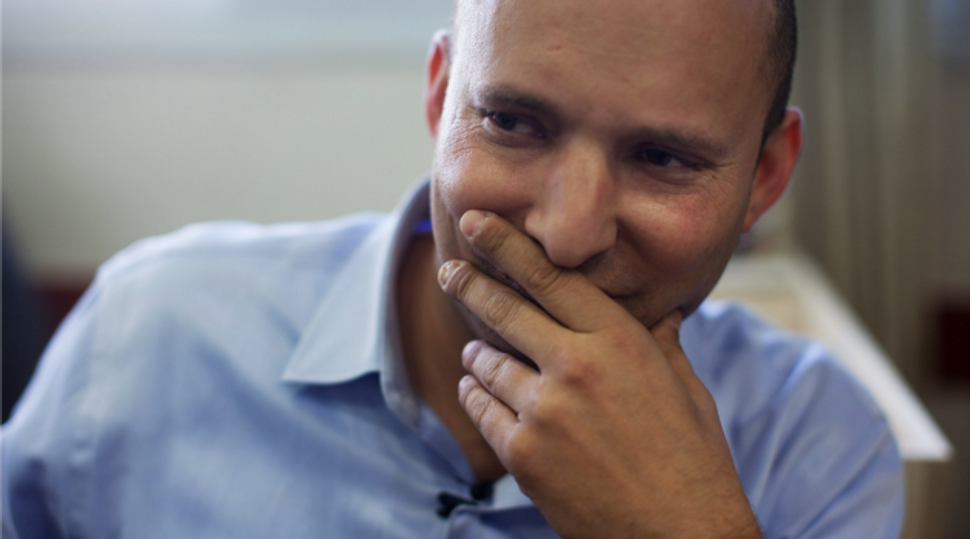 On Wednesday, the multi-portfolioed Naftali Bennett – Israel’s Minister of the Economy, Minister of Religious Services, and Minister of Jerusalem and Diaspora Affairs – sent a letter to his Prime Minister, Benjamin Netanyahu.

In that letter, according to Israeli Army Radio, Bennett called for a cabinet meeting “to begin the process of imposing Israeli sovereignty on the areas of [the West Bank] that are under Israeli control.” This he called “Plan B,” saying Plan B is necessary because negotiations with the Palestinians have failed – because “the Palestinians have broken new records of extortion and rejectionism.”

Now. It must be acknowledged that this is some phenomenally well-honed and impressively brazen Orwellian doublespeak. Truly.

Because imposing Israeli sovereignty on huge chunks of the West Bank has never been Bennett’s “Plan B.” Unlike Palestinian President Mahmoud Abbas (who – whatever else his faults – has publicly advocated a two-state solution since 1977), Bennett has never aspired to a two-state peace. Ever. Indeed, one might say that Bennett’s entire political career has been one of rejectionism and extortion. How do I come to this conclusion? By reading his words.

Months before he was brought to within a hair of king-making power in Israel’s March 2013 elections, Bennett told The New Yorker’s David Remnick: “I will do everything in my power to make sure [the Palestinians] never get a state…. No more illusions.”

In June 2013, a month before U.S. Secretary of State John Kerry launched his Herculean effort to revive peace talks, Bennett told Yesha, the settlers’ political arm: “The idea of forming a Palestinian state in Israel has reached a dead end…. What occupation? Can one be an occupier in one’s own home?”

Just two weeks after that Herculean effort had actually been launched, Bennett called for annexation of the Israeli-controlled parts of the West Bank, in August 2013. He did so again in December of 2013. He did so again last month. “Give me 40 seats in the Knesset,” he told a group of students in March, “and I will take care of it.”

Back in January, Bennett told a meeting of his party faction (Habayit Hayehudi) that “Israel’s economy will be decimated by a Palestinian state.” Later that same month, Bennett attacked Netanyahu for telling the World Economic Forum that settlers who want to stay in a future Palestinian state should be allowed to do so: “Whoever even considers having Jews live in the Land of Israel under Palestinian sovereignty,” according to Bennett, “undermines our presence in Tel Aviv.” In February, he told the BBC that the settlements are a permanent part of the picture.

And what has been Bennett’s approach to the four-stage Palestinian prisoner release to which his government committed itself (and in return for which he extorted some hefty settlement expansions)? Bennett opposed them in September. He opposed them in October. He opposed them in March. Indeed, he apparently told Netanyahu that he would decimate the ruling coalition if the final stage took place.

And what a wonder! Who could have predicted! The last group of prisoners was not released as promised at the end of March – and then (surprise!) Israel announced more settlement homes.

And then, last week, the Palestinians retaliated by applying to join 15 international organizations and treaties – and yes, Virginia, that’s the actual order in which the events actually occurred, no matter what Bennett, et al, would have you believe.

Bennett would be right at home. From the moment a microphone first appeared before him, Naftali Bennett has sold his ideology as truth in an effort to change the past and control the future; he consistently says whatever he wants to keep the Israeli people and global community ignorant of Real Reality, and thus strengthen everyone’s allegiance to (or at least exasperated acceptance of) the Israeli right’s vision of the world.

Most impressively, it appears to be working – perhaps because his Prime Minister was never really on board with the whole two-state idea to begin with.