Keeping Guns Away From the Torah in Georgia 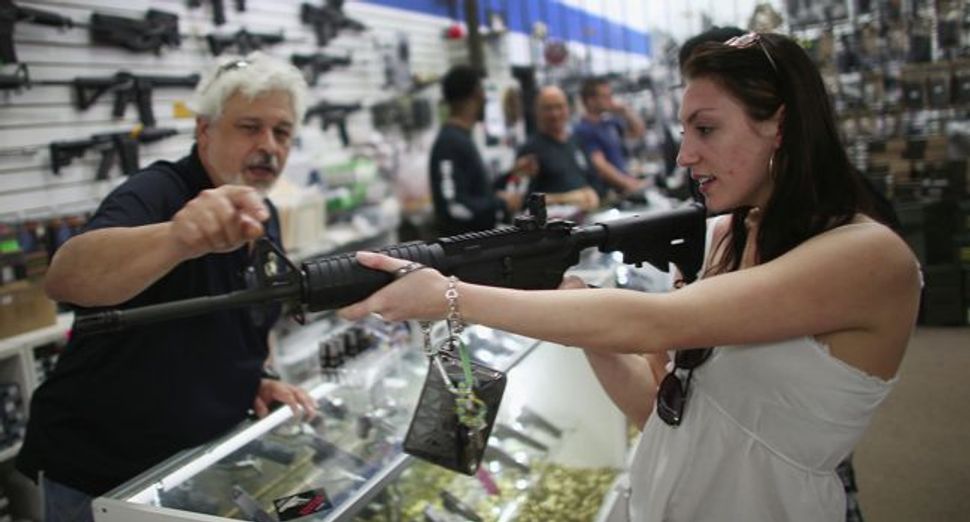 I may live in a so-called “Bible Belt” state, but lately the state government of Georgia has been neglecting some critical biblical values. The Prophet Isaiah implores that all shall “beat their swords into plowshares and their spears into pruning hooks,” but Georgia Governor Nathan Deal just signed into law new sweeping legislation that allows weapons to be more pervasive than ever.

One of the most extreme and permissive state gun laws in the nation, Georgia’s Safe Carry Protection Act of 2014, commonly referred to as the “Guns Everywhere Bill,” will allow licensed owners to carry firearms into public places, including bars and some government buildings. School districts can also appoint staff members to carry firearms on school grounds.

These provisions are all alarming, but as a rabbi, I am particularly concerned with the fact that the bill also allows weapons in houses of worship.

Technically, houses of worship are given the choice to “opt-in” if they want to allow weapons, but this kind of nuance can be easily lost on the general public. As a result, the burden has now been placed on congregations that do not want weapons on the premises to be vigilant in communicating that message, posting signs and informing local law enforcement that they are institutions where guns are not welcome.

In anticipation of this bill, our congregation’s board of trustees recently passed a resolution to adopt such a policy, declaring our synagogue to be a weapon-free zone, with the exception of active military and trained security staff on site.

We take security very seriously, which is precisely why we have guards and security protocols in place, and why we do not want more weapons on the premises. The entire board lamented the necessity to consider such a policy.

WHEREAS, in keeping with the spirit of Isaiah 2:4 ”He shall judge between the nations and reprove many peoples, and they shall beat their swords into plowshares and their spears into pruning hooks; nation shall not lift the sword against nation, neither shall they learn war anymore”;

AND WHEREAS, reflecting that Temple Sinai is a house of God and a house of hope;

THEREFORE, with the exception of active military, and security personnel, Temple Sinai shall be declared a weapons-free zone;

BE IT FURTHER RESOLVED that this be actively communicated to the congregation and to law enforcement.

When people come to a house of worship, they come to focus on the mind and the spirit; they come to nurture their souls. Worrying about firearms in the pews compromises those sacred goals. A synagogue, church, mosque or temple is supposed to be a safe haven, a place of refuge, comfort, inspiration and hope. We do not want it to become, like so many other places in our society, a place of fear.

Advocates of the Second Amendment say that citizens have a right to carry a weapon. This may be true, but it does not necessarily make us any safer, nor does it make us feel free. A right does not always equal freedom — and in this case, the inappropriate exaggeration of a particular right has the power to erect walls of fear that only confine us.

As we prepare for the Guns Everywhere Bill to take effect in the coming months, I pray that lawmakers and citizens alike will be patient and that all will remember the precious nature of our most sacred spaces. May the words of the Holy One in Leviticus 26:6 ring true: “I will give you peace in the land. You will lie down and no one will make you afraid.”

Elana Erdstein Perry is a rabbi at Temple Sinai in Atlanta.

Keeping Guns Away From the Torah in Georgia