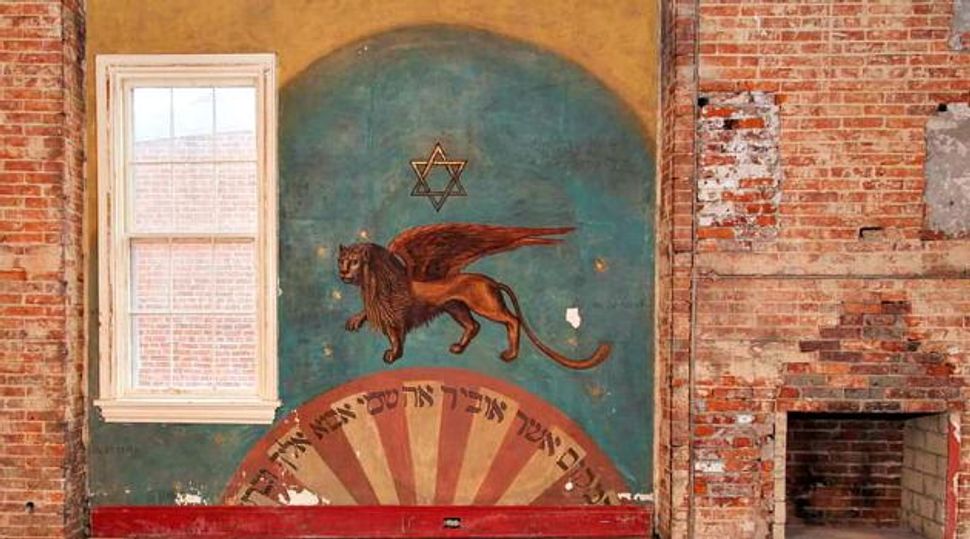 Stephanie Slewka was peeling layers of paint and plaster from her just-purchased house in downtown Washington, D.C. when she spied a blue patch — unusual in the mildewy mess of browns and beiges. Removing a few more gunky strata revealed a Star of David. And tearing off even more exposed an arc of Hebrew letters across a sky-blue background speckled with stars. “We didn’t know what it meant, but it seemed awfully cool,” she told the Forward.

The artwork turned out to be a 1920s mural commissioned by Shomrei Shabbos, an Orthodox congregation that occupied the house in the early 20th century. To understand its history, Slewka called on the Jewish Historical Society of Greater Washington. To restore it, she tapped local artist Nicholas Kahn, who also added a Venice-inspired winged lion. And so the non-Jewish homeowner became the unlikely guardian of a rare and valuable piece of the region’s Jewish history. “It just became part of the house,” Slewka said.

That was 1993. Now, ten years after Slewka sold the house, the mural is facing a new threat to its survival. A developer plans to convert the house to condominiums. And the Jewish Historical Society of Greater Washington is mounting a last-ditch effort to save the artwork, believed to be the only surviving synagogue mural in Washington.

Through a hastily built web site, Save the Mural, the Society is seeking at least $20,000 in donations “to preserve this remnant of our past for generations to come…. JHSGW hopes to save the mural before construction starts in July. We commissioned a photographer to document the mural, and have a proposal in hand from a conservation firm to remove and conserve its original portions. But we need to act quickly.”

The campaign follows last year’s discovery of a long-lost synagogue mural in a Burlington, Vermont building that had been converted to apartments. According to Washington weekly The Intowner, that mural — believed to be the work of a Lithuanian-born artist — had been walled off by sheetrock. The ceiling-height mural was behind the original location of a Torah ark, and features two lions of Judah beside a tablet of the Ten Commandments. When the mural was recently uncovered to see about preserving it, it was still considered the only one of its kind left in the world.

The murals “are a unique form of Jewish folk art distinct to Eastern European communities, and you only find them in a small number of synagogues,” said Zachary Levine, the Jewish Historical Society of Greater Washington’s curator. “It surprises me that it’s still around in the first place,” Levine told the Forward. “There’s been so much ethnic succession in D.C., just like other American cities. If the former owner hadn’t peeled back that wallpaper, this thing would have been lost.”

If the campaign succeeds, “our intent is to include the mural in some fashion in our collection,” Levine said. As the Forward has reported, the Society is expanding from a smallish non-profit to a major museum dedicated to D.C.’s Jewish history.

Along with their own historical significance, the mural and house tell bigger stories about D.C.’s rich Jewish heritage, Levine said.

“The house is just one of several buildings that share this history of being home to the Jewish community and the African-American community,” he said. “It’s one of five former synagogues in a small area that once was the historical center of Jewish D.C. And for decades, the neighborhood had almost no Jews in it.”

The film below tells the story of 415 M Street, the building that houses the mural. Produced by Stephanie Slewka