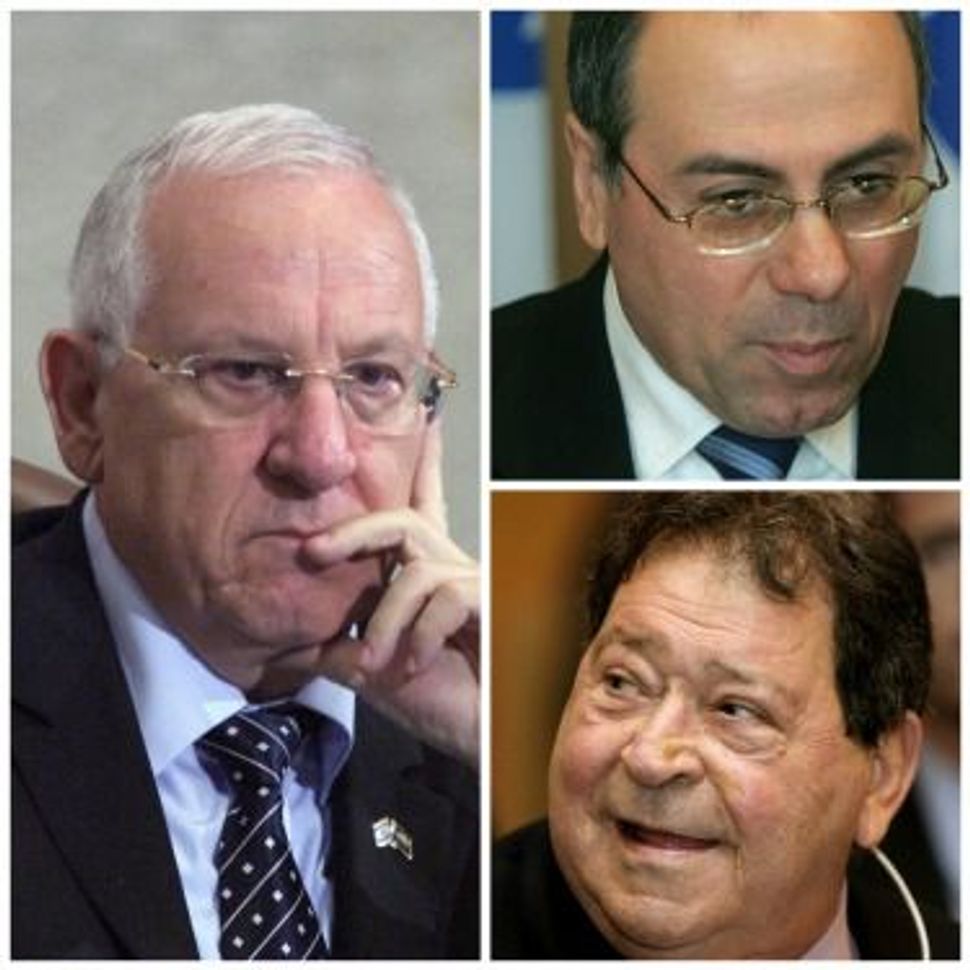 The speaker of Israel’s Knesset dropped a bombshell Saturday night into the country’s closely watched presidential race, saying he suspected political sabotage behind the sudden eruption of scandals that destroyed two of the lead candidates in the past three weeks. And the stepson of one of the tarred candidates is using the furor to reopen one of the unsolved mysteries of the Iran-contra scandal.

The Knesset speaker, Yuli Edelstein of Likud, told a Channel 10 talk show host Nadav Perry that he didn’t have information to name names, but believed there was a “guiding hand” behind the sudden scandal eruptions. Asked if he suspected another candidate was responsible, he first said, “No, I think the still, small voice [of God] came down and made the allegations.” Then he turned serious and said, “Look, I’m not so naïve as to believe that people serve in the public arena for 30 years, serve in most senior positions, deputy prime minister, foreign minister, finance minister, interior minister, and suddenly in the space of three weeks all these charges drop on them.”

The Knesset is scheduled to vote by secret ballot on Tuesday to choose a successor to figurehead president Shimon Peres. There were six declared candidates. The front-runner by most accounts is Reuven “Rubi” Rivlin, 74, a former Knesset speaker widely admired and respected for his charm, gentlemanly manner and vaunted devotion to his principles, including civil rights for all Israelis, democratic process and — his signal cause throughout his career — the Greater Land of Israel.

Since May 21, Rivlin’s two leading rivals have been forced to quit the race after allegations of criminal activity suddenly emerged. One, Silvan Shalom of Likud, 55, former foreign and finance minister and one of Prime Minister Netanyahu’s closest allies, quit the race May 21 after trying for two months to fight an anonymous charge of sexual harassment dating back to 1999. The other, Binyamin “Fuad” Ben-Eliezer of Labor, 78, a retired brigadier general, onetime military governor of the West Bank and Gaza and former defense minister, quit the race today (Saturday) after a charge of bribery emerged on Thursday, leading to his interrogation by police on Friday.

Ben-Eliezer, born in Iraq and a Knesset member since 1984, is popular among Sephardic Jews as well as Israeli Arabs. Shalom, born in Tunisia and a Knesset member since 1992, has long stood in Netanyahu’s shadow and occasionally clashed with him. Rivlin was strongly opposed by Netanyahu because of his occasional barbs over Netanyahu’s alleged cutting corners. He’s also opposed by Foreign Minister Avigdor Lieberman because, as Lieberman told journalist Nahum Barnea last week, of Rivlin’s support as speaker for Israeli Arab Knesset members when they’ve been accused of disloyalty. He’s also feared by many on the left because of his uncompromising devotion to settlements and opposition to territorial compromise with the Palestinians.

Edelstein is expected to meet Sunday morning with the leader of the opposition, Labor Party chief Yitzhak Herzog (whose own father Chaim Herzog was Israel’s sixth president) to discuss the possibility of postponing the Knesset vote in order to clear up some of the scandal. Ben-Eliezer told reporters he had full documentation for the money that paid for his Jaffa apartment, which is alleged to have come from a disgraced businessman.

In the current rumor mill, few seem willing to believe that Rivlin, whose best known calling card is his incorruptibility, could have arranged the planting of phony charges against his rivals to knock them out of the race. Who might be behind it remains a mystery. But with the speaker of the Knesset backing the conspiracy theory, it’s sure to get wider airing in the next few days.

The bottom line, after all, is that — whatever else can be said about the race — the Knesset, despite a clear majority in favor of a two-state solution, is probably about to elect a state president, Rivlin, who is unalterably in favor of a one-state solution, and . That this is not a factor in the race must say something about the state of the Israeli body politic at this moment in its history.

Shalom’s stepson, radio journalist Nimrod Nir, caused a stir on May 31 when he was asked by a television interviewer whether he believed the charges against Shalom were a “political assassination.” Rather than answer, he changed the subject and said, “Listen, there are real political assassinations” — and pointed to the death of his natural father, intelligence figure Amiram Nir, who was involved in the Iran-contra affair in the 1980s as an aide to then-prime minister Shimon Peres. Amiram Nir died in a plane crash in Mexico in 1988.

Nimrod Nir said he believes his father was killed to protect the 1988 presidential candidacy of then-vice president George H.W. Bush, who he said feared the elder Nir might expose Bush’s own involvement in the scandal.

Following the death of the senior Nir, his widow, Judy Nir-Mozes, whose family owns Yediot Ahronot, married Silvan Shalom in 1993.

Coincidentally, the Iran-contra scandal resurfaced in the Washington media almost immediately after Nir’s comments, as a result of Republican attacks on President Obama for trading Taliban detainees in return for captured GI Bowe Bergdahl. Bergdahl’s release was announced May 31, the same day Nir spoke in Israel.

Iran-contra involved dealings in which the Reagan administration sold arms to Iran via Israel in return for freeing hostages. Cash from the arms sales, which were illegal, was then used to finance the contra war against the Sandinista government in Nicaragua, which Congress had outlawed as well.

The White House aide who oversaw the complicated mid-1980s dealings, Lieutenant Colonel Oliver North, spoke with Sean Hannity last week — three days after Nimrod Nir’s appearance — and charged that the Obama White House had paid cash to the Taliban for Bergdahl’s release, which he charged was financing terrorists.

Liberal journalists have been hitting back hard at Republicans, first for flip-flopping on the value of Bergdahl’s freedom, which they once championed, and then for hypocrisy in attacking the Democratic president over something that the most revered Republican president of recent times practiced on a far larger scale.

Nimrod Nir’s charges can only add fuel to the rekindled Iran-contra fire in Washington. And if anything comes of Edelstein’s charge that two candidates for Israel’s presidency were deliberately knocked out of the race through manufactured scandal, we’re in for a wild summer.