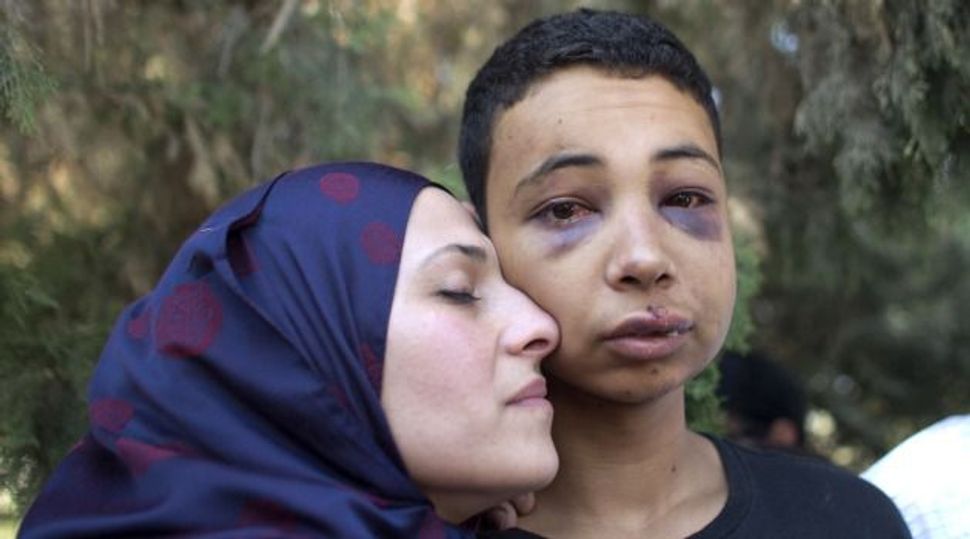 I have no idea what Tariq Khdeir was doing on the day he was savagely beaten.

I have no idea if — like the American high school student in my own home – Tariq woke up late and lazy, because that’s what vacation’s like. Maybe he slipped on headphones as he reached for his cell, checking his texts or the World Cup stats. Maybe he jumped straight out of bed. Maybe he lay quietly under the covers, trying desperately not to remember his cousin Muhammad’s voice, not to envision his grisly murder, not to hear the sobbing of his family.

Maybe Tariq Khdeir woke up filled with sorrow and helplessness. Maybe he woke up filled with rage. All those years in American schools, walking American streets, hearing about what life was like for his cousins in East Jerusalem, and then there he was, right in the house, with wailing family and shattered hearts. Maybe Tariq wanted to at least see Palestinians fighting back in his cousin’s name, just to see the rocks thrown, just to see the anger and maybe some fear on the other side.

Maybe Tariq Khdeir wrapped his head in a red-and-white checked keffiyeh because he’d been warned not to go out, and he didn’t want to get busted. Maybe he wrapped his head because he didn’t want to be recognized by police. Maybe he got out there and, like many angry young men before him, felt the power of rage surging through the streets and his own veins and picked up a rock. Maybe Tariq Khdeir threw some rocks — he says he didn’t, but for the sake of argument, let’s imagine he did. Grief and fury can muddle the minds of even straight-A students.

I don’t know what Tariq Khdeir did that day, or how he felt, or what he was thinking, but here’s what I do know: He went out to the streets. He was at a protest that had shaded into riot, and his head was wrapped in a keffiyeh. And two Israeli police officers, broad of chest and fully armed, grabbed him – a slight 15-year-old boy — and dragged him to where they believed they would not be seen, and they beat the ever-loving daylights out of him. They held him down. They kicked him. They hit him. They took turns. They broke his nose. They blackened and bloodied his eyes. They held him down and beat him.

Tariq didn’t have a weapon in his hand or on his person. He’d been separated from whoever he’d been with. Whatever he may or may not have done in the moments before the now infamous video of fists and feet raining down on his body, Tariq Khdeir was not any threat, of any kind, to those who pushed him to the ground and raised their boots.

I don’t know what Tariq and his family think of me and mine. I have no idea if they wish the Jewish State wiped from the map, or if they’re willing to grope through the dark to build co-existence. I can imagine that whatever they may have felt before Tariq was viciously abused and Mohammad viciously murdered, their thoughts and their hearts may have changed in the meantime. Jews know a little something about watching loved ones abused and murdered, and how that can squeeze the heart. I hope that the condolences of Jewish mourners goes some way toward healing that which is broken.

I don’t know what the Khdeir family thinks, but the truth is that I don’t care. I don’t care if they hate me. I don’t care if Tariq personally wishes me or my American-Israeli son, just one year his junior, dead. I don’t care. Because here’s another thing I know: What was done to Tariq was a crime. It was a disgrace to Israel and the Jewish people. It was a shanda of the highest order — and anyone who sees it any differently has allowed themselves to be blinded by hate or the demands of communal anxiety.

I can see, and I can hear. I saw a child beaten, mercilessly. I saw a boy much like my own, battered like a side of beef. Though the video is silent, still I can hear Tariq’s cries of pain, and imagine the panic coursing through him, just before he blacked out from pain.

Shame on those who refuse to see and hear. Shame on them.

My deepest condolences to Tariq and his family, for the horrors visited upon them, and the hardened hearts that claim to represent me. I cannot undo any of that, but at least I will bear witness.