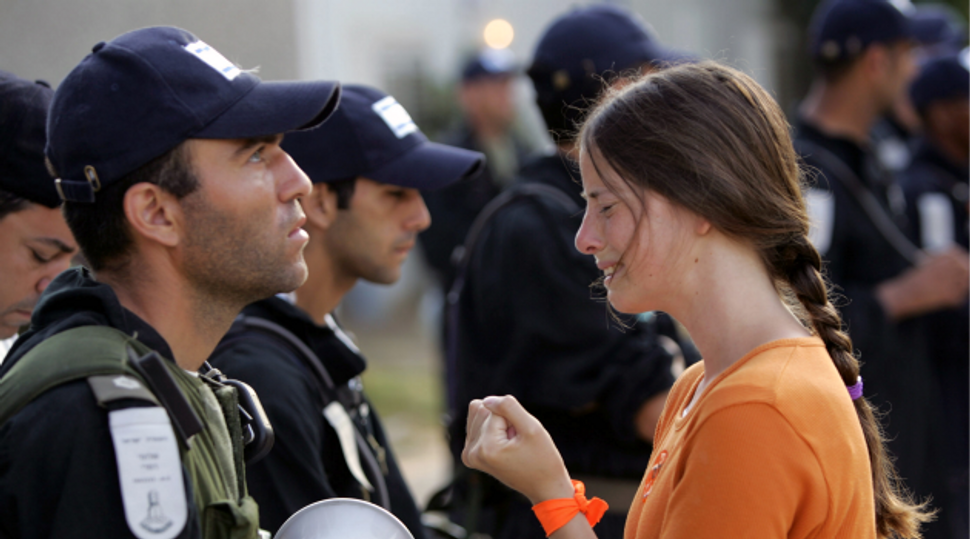 Even as war continues to rage, August will mark the ninth anniversary of Israel’s unilateral withdrawal from the Gaza Strip. Dubbed a “disengagement” by Prime Minister Ariel Sharon, the retreat was greeted enthusiastically by the institutional Jewish community. A full-page ad in the New York Times, spearheaded by the Israel Policy Forum and signed by 27 organizations, praised the plan as “courageous.” The Conference of Presidents of Major American Jewish Organizations greeted Sharon as “a great and patriotic leader,” and even AIPAC came around, if with a caveat:

“If the Palestinians transform Gaza into a reasonably well-functioning, reasonably peaceful place — not necessarily Sweden — then the world won’t have to pressure Israel to do this in the West Bank,” said Howard Kohr, AIPAC’s executive director.

As luck (or possibly behind-the-scene conversations) would have it, the whole disengagement plan was conceived to help Israel avoid international pressure — if not quite in the way Kohr seemed to be suggesting. As Dov Weisglass, Sharon’s adviser and confidante, acknowledged in a pre-withdrawal interview, Gaza was to be sacrificed in order that Israel could better hold on to the West Bank.

The disengagement is actually formaldehyde. It supplies the amount of formaldehyde that’s necessary so that there will not be a [diplomatic] process with the Palestinians.

… The disengagement plan makes it possible for Israel to park conveniently in an interim situation that distances us as far as possible from political pressure. It legitimizes our contention that there is no negotiating with the Palestinians.

In keeping with the contention that “there is no one to talk to,” Sharon didn’t even coordinate the withdrawal, much less negotiate it, with Palestinian Authority President Mahmoud Abbas. Israel simply pulled up stakes, and gave the party with which it had been in a diplomatic process since 1993 nothing to show for its efforts.

Unsurprisingly, Hamas announced that its rockets had made Israel turn tail, and — in the absence of a credible competing claim — declared victory. Less than six months later, Palestinian legislative elections were held, and Hamas narrowly won. As is now abundantly clear, Hamas did not transform Gaza into “a reasonably well-functioning, reasonably peaceful place,” or, indeed, “Finland.”

Most Israelis/Jews/Westerners who discuss the Israeli-Palestinian conflict point to the information in that last sentence, the falling rockets and recently-discovered tunnels (or, more accurately, “recently-announced tunnels” given that Israel has apparently known about them for some time) and say “That’s why Israel has to do this — it’s all Hamas’s fault!”

And I do not want to suggest, for even a moment, that Hamas is not responsible for its actions. Every individual who ever launched a rocket, dug a tunnel, or (for that matter) strapped a bomb across their chest is responsible for their actions, and the organizations on whose behalf they performed those actions is equally responsible. We all make choices; those were the choices those people/organizations made; they were horrific choices that have terrorized my people.

But this decades-long tendency in Israel and among its supporters to insist that Israel’s actions, on the other hand, have no consequences in the real world — the world in which Palestinians live and have their lives controlled by a foreign government armed by the Middle East’s most powerful military — is borderline delusional.

Let’s begin with the fact that most Israelis/Jews/Westerners labor under the misapprehension that Sharon’s disengagement ended Israel’s occupation.

Israel did remove all military personnel from within Gaza’s borders, along with 9000 settlers, but the IDF maintained and still maintains tight control of the Strip’s airspace, access to the sea, and all but one border crossing (which is controlled by Egypt, and is not built for commercial traffic). This means that Israel controls nearly all movement in and out of the Strip — people, medicines, building supplies, commercial goods, food, and so on — and thus Gaza remains, by all international standards, occupied by Israel. Israel didn’t just pull up stakes — it locked the door, and put the key in its pocket.

What if, instead, Israel had negotiated with Abbas and his two-state minded Fatah party in 2005 — if not actual peace, then at least security arrangements? What if, when Secretary of State Condoleezza Rice personally negotiated a transport agreement intended to make life easier on Gazans and give Fatah a post-disengagement/pre-election victory, Israel had kept its side of the bargain? How about when Hamas won those elections — what if Israel hadn’t chosen to use its control of the borders to “put the Palestinians on a diet, but not to make them die of hunger,” in the hope of turning Gazans against Hamas (a tactic that’s failed throughout human history), or hadn’t chosen to join the Bush Administration in encouraging (and arming) Fatah to overthrow Hamas in 2007 — or maybe, when that blew up in everyone’s faces and left Hamas in control of Gaza, what if someone had considered taking the Arab League up on the Arab Peace Initiative?

And that’s not even taking into consideration 2006’s Operation Summer Rains, the war-in-all-but-name that Israel launched in response to the capture of soldier Gilad Shalit (which capture, no one seems to recall, was in retaliation for Israel’s kidnapping of two suspected Hamas members the day before). More than 250 Palestinians were killed before all was said and done, and Gaza’s infrastructure (including the Strip’s only power plant) shattered. And that’s just the first two years after “disengagement” — subsequent years have only seen more of the same.

What if those things hadn’t happened? I’ll tell you what if: We don’t know.

We don’t know what might have happened if Israel had taken the Palestinians of Gaza (or anywhere) seriously, treated them, their humanity, and their rights with dignity, or even genuinely strived toward a two-state solution. As Weisglass made clear in 2005, and Netanyahu himself clarified again just recently — Israel hasn’t been genuinely interested in a two-state solution for years.

Defying every lesson that history has to offer, Israel wants very badly to decide its fate unilaterally — that’s what the 2005 disengagement was about. Yet rather than provide independence of action, the dream of unilateralism has in fact allowed extremists to set Israel’s agenda and, not incidentally, terrorize the Israeli people.

And nine years later, here we are. Again.