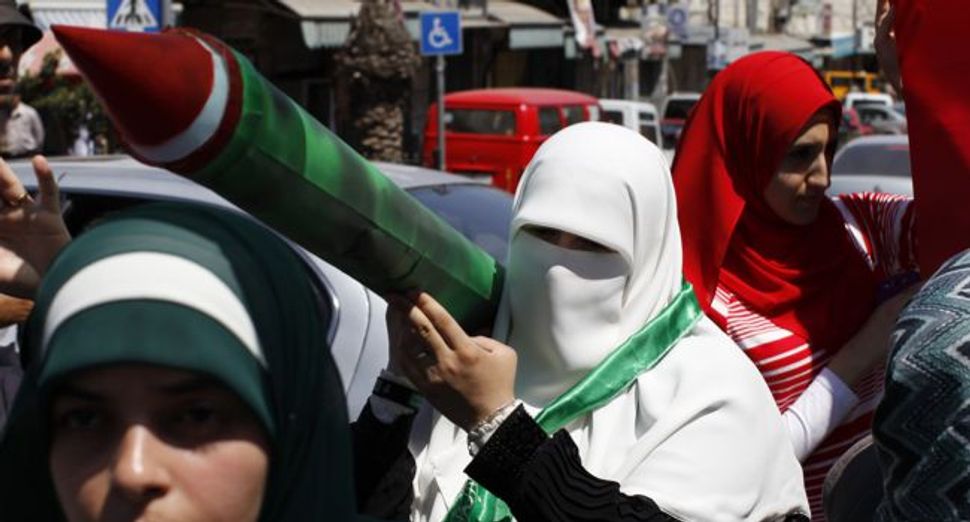 Uncompromising: A Palestinian woman carries a mock Qassam missile as she attends a rally in support of the Hamas movement following Friday prayers in Ramallah on August 8. Image by Getty Images

This is perhaps the single most important, and most widely misunderstood, point about the Gaza war: The strategic aim of Hamas rockets is to perpetuate, not to end, Israel’s military rule over the West Bank.

Many, within and outside Israel, assume that Hamas aims primarily at ending the so-called siege of Gaza. But this is, at best, a secondary goal. Because originally there was no siege. Israel evacuated Gaza in 2005 and was ready to gradually cede control of its borders. Still the rockets came raining down on Israel’s southern towns. Control of the borders was tightened in response to rockets, not the other way around.

So why fire at Israel if it left Gaza? This begins to make sense only when you realize that the strategic aim of Hamas is to prevent partition, because partition is vital to the survival of Zionism. As Thomas Friedman rightly remarked in an August 5 New York Times column, Hamas realizes full well that a continued occupation of the West Bank would lead to the gradual isolation of Israel on the world stage, since no democratic state can survive forever while maintaining a huge native population without civil and political rights.

But this is not all. In the long run, failure to divide the land will drown Zionism in bi-nationalism. This is why the Israeli left and center have come to think of partition as Israel’s vital interest, the only way to save Zionism from gradual ruin. Why wouldn’t Hamas know this, too?

Once you put in this missing piece, recent history becomes more intelligible. Israel opted for partition in the 1993 Oslo Accord. Back then, many Israelis believed that the Palestinians, too, had reconciled themselves to the two-state solution and were ready to end the conflict. The year 2000 brought a rude awakening when Yasser Arafat refused Prime Minister Ehud Barak’s full partition deal. A tectonic shift followed. The long-standing paradigms of both left and right suddenly collapsed. The left assumed that Israel could get peace for territorial concessions, and so it supported peace talks. The right objected to these talks, because it assumed that once we gave up the West Bank, the Palestinians would demand Jaffa next. This was called the Salami Theory: The Palestinians, the theory went, are aiming to take over the whole Land of Israel slice by slice. What both paradigms took for granted was that partition served the Palestinian interest.

But as it turned out, the Palestinian leadership did not, and does not, think so. And so a new fear began to sink in: What if the Palestinian aim was to “liberate” the whole of Palestine by keeping the Salami whole? Because only with the Salami intact could they hope for the eventual achievement of a Muslim majority. It suddenly seemed that the right was correct in thinking that the Palestinians did not, in fact, give up the dream of Greater Palestine, and the left was correct that failure to partition the land would lead to the destruction of Zionism by sheer force of demography.

This is what led the majority of Israelis to support Ariel Sharon’s unilateral disengagement from Gaza: If we can’t have peace, at least we’ll have secure borders, within which a clear Jewish majority will ensure the survival of a democratic Jewish nation state. Continued rocket fire from Gaza, after Israel left it, seemed to confirm these fears. Gazans were now shooting from the no-longer occupied Gaza Strip at Israel proper. So Israel planned to move on with further unilateral withdrawal. Ehud Olmert was elected to the premiership on a platform of disengagement from the West Bank as well.

But then came Israel’s second Lebanon War, in 2006. Hezbollah fired rockets that virtually paralyzed the northern third of the country. This radically changed Israel’s view of the Hamas attacks. What formerly seemed like an irritation, limited to some southern towns, now began to look like a strategic game changer. Netanyahu’s warnings that leaving the West Bank would give rise to a new Hamastan only 10 miles away from Israel’s heart — Tel Aviv, Jerusalem and Israel’s single international airport — now seemed very much to the point.

As Friedman rightly noted, if Hamas’s aim is to perpetuate, not end, the occupation, it certainly came up with the right tactics. And this confirms the old adage: Opposites converge. Extremists on both sides want to prevent partition. Both think they can have it all and leave the other side with nothing. Both are wrong: In the long run, if we don’t divide the land there will be neither a Jewish nor a Palestinian state; there will only be a Lebanon-style civil war for another century.

And this is why anyone in favor of partition should have supported Israel in this war. If Israel does not demonstrate that it has an answer to the threat of rockets (a combination of Iron Dome, diplomatic support, stern deterrence), it will not be able to convince its citizens that partition is possible.

Gadi Taub is a senior lecturer in the School of Public Policy and the Department of Communications at The Hebrew University of Jerusalem. His most recent book to appear in English is “The Settlers and the Struggle Over the Meaning of Zionism” (Yale University Press, 2010).