In WWI, Jews Fought for Britain. So Why Didn’t Britain Fight for Jews? 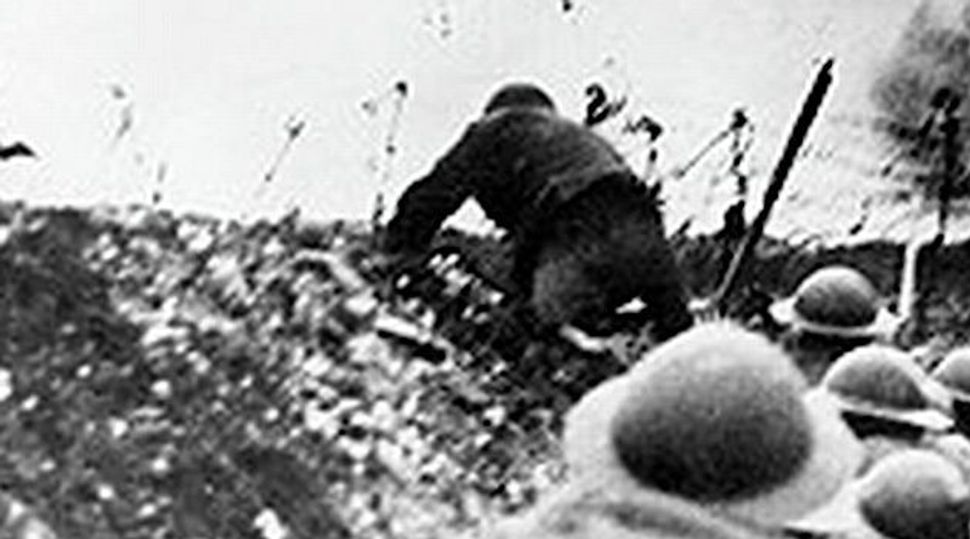 “Britain has been all she could be to Jews” — a recruitment poster issued at the beginning of World War I reads — “Jews will be all they can to Britain: Join the special Jewish unit.”

At the outbreak of hostilities in August 1914, it was the policy of the established Jewish community in Britain to encourage enlistment (the British army remained all-volunteer until 1916). In the first days and weeks, 4,000 young men from the largely middle-class settled community signed up out of patriotic feeling. By the end of the war, more than 50,000 Jewish soldiers had fought for Britain, to say nothing of the 100,000 Jews in the German army and around half a million in the Russian armed forces.

For European Jewry, it was a great endeavor and sacrifice without gain. Despite these expressions of deep loyalty to the country, Britain, for one, was not all she could be to her Jews. At the same time as the established community was promoting enlistment, unnaturalized Jewish immigrants were classified as aliens and could not serve until 1916, when alien conscription or deportation was introduced. These immigrants — Russian Jews for the most part — were reluctant to engage in a war where they would have to fight on the same side as the country they had fled, a war in which they felt they had little stake; they were also reluctant for reasons of faith and politics.

Among the British people, war with Germany birthed a new wave of patriotism within which the stranger became suspect. Growing anti-German feeling and xenophobia begot attacks on Jews with German names, and thousands of people took to the streets in anti-Jewish riots in Leeds and in London’s Bethnal Green in 1917. As a need for a huge number of uniforms, tents and equipment resulted in a boom for Jewish traders, the old trope that Jews were profiteering from Britain’s misery could not be suppressed.

As the war dragged on season after season, and even after the war was over, anti-Semitism and resentment toward those who avoided conscription was a constant presence. “An antipathetic sentiment harbored by non-Jews towards Jews is found these days in many quarters,” said an article in The Jewish Chronicle, published in September 1917. “It is, without doubt, now upon the increase and has been definitely and noticeably so since the beginning of the war.”

And yet it would transpire that the British Jewish experience of war was not so bad when compared with other quarters of Europe. Around 12,000 German Jews died on the killing fields of Belgium and France, but they gave their lives in the name of a nationalism that wanted them not. Germany’s eventual capitulation led to the myth that Germany had been undermined and betrayed by its Jews. It was a charge of treason that never went away, a resentment that helped kindle a holocaust.

During WWI, then, European Jewry were the victims of Imperial Europe’s slide into a Europe of nations, a process accelerated by the engine of war. Where once Jews had found themselves as fairly happy members of multinational, multiethnic empires, in an Enlightenment Europe where Europe gave Jews their emancipation and Jews gave Europe its civilization, Jews were becoming outsiders in narrow, suspicious ethno-nationalist states. The original Europeans were being excluded from Europe.

The response of established Jewish communities in Britain and Germany to this new predicament had throughout the 19th century been assimilation. Reform Judaism in particular encouraged the idea that no longer would there be English Jews and German Jews, but Englishmen and Germans of the Mosaic faith. But — as they faced one another in the trenches, and anti-Semitism festered on the front line and back home — the principle that citizens could be both one and the other, and the sense of unity that Judaism created between Jews of different nations, was strained as never before.

The great British Jewish war poet Isaac Rosenberg — who laid down his life for his adopted country early on the morning of April 1, 1918, during the Spring Offensive — wrote of his gentile comrades in the trenches, “the blonde, the bronze, the ruddy, with the same heaving blood” who “keep tide to the moon of Moses.” But if Jews and Christians are of the same blood, “then why do they sneer at me?” Rosenberg asked.

They sneered because in this new Europe of nations and nationalisms, there could be no place for Jews. For all they had given and lost in the name of king and country, republic and empire, in the European imagination, Jews after the WWI remained not only outsiders but also a symbol: harbingers of gloom and disease, possessors of ostentatious wealth, the vanguard of Bolshevism, spies, cowards and traitors. The attempt at assimilation, to become Englishmen and Germans of the Mosaic faith, had failed not by 1945 but by 1918.

If the Jews of Europe could be said to have gained anything from their efforts in WWI, it was Zionism. The war launched many of the political achievements that would later make the establishment of Israel possible. The Balfour Declaration lent British support to establishing a national home for the Jewish people in Palestine; Edmund “The Bull” Allenby’s entering of Jerusalem on foot led directly to the British Mandate of Palestine; The Jewish Legion, in which Vladimir Jabotinsky, Joseph Trumpeldor and David Ben-Gurion served and learnt, took part in the Palestine campaign.

But WWI would also confirm the righteousness of the Zionist case, what Theodor Herzl had foreseen as he had watched the Austro-Hungarian Empire disintegrating at the end of the 19th century, giving way to hatred and exclusivity. The Shoah was the most definitive and tragic illustration of the necessity of Zionism: in the words of Israel’s Declaration of Independence, a “clear demonstration of the urgency of solving the problem of homelessness.”

But the fate of the thousands of European Jews who were torn asunder at the Somme or drowned in the mud at Passchendaele — whose sacrifice nationalist Europe spat out — and those who came home to Germany from the Western Front only to be labeled fifth columnists were emblematic, too. World War II could catastrophically confirm what WWI had forewarned.

In WWI, Jews Fought for Britain. So Why Didn’t Britain Fight for Jews?