Jewish War Poet Finally Getting His Due 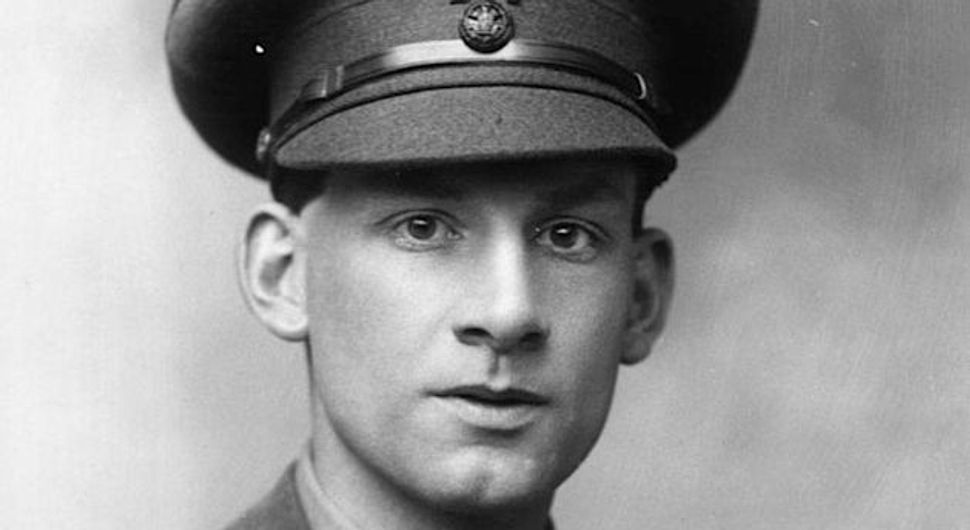 It was the slain generation of warrior-poets who, more than any others, captured the brutality and inhumanity of the First World War and cemented in the English imagination a perception of that conflict as pointless and futile.

As wave after wave of men were sent to their deaths at the Somme and comrades drowned in the mud at Passchendaele, English poetry from the front abandoned themes of patriotism, glory and valour for the pain and misery of trench warfare. Verse became soaked in blood as nearly 900,000 British troops fell in the fields of France and Belgium. “But the old man who not so, but slew his own,” Wilfred Owen wrote in his twisted retelling of the binding of Isaac, “and half the seed of Europe, one by one.”

The Great War’s centennial has brought about a re-examination not only of the war itself but how it is remembered, what is emphasised and what is forgotten. In that spirit, the Jewish East End Celebration Society — whose aim is to raise awareness of the history and culture of London’s Jewish East End — is fundraising to erect a statue of the war poet Isaac Rosenberg at Torrington Square in Bloomsbury. To be unveiled on April 1, 2018 – the hundredth anniversary of his passing – it would make Rosenberg the only Jewish literary figure other than Benjamin Disraeli to be afforded a monument.

In the canon of First World War poetry, the work of Isaac Rosenberg is sadly overlooked. And yet his life and verse are in many ways more compelling than most. John Sutherland, writing in The Times, notes that Rosenberg was a noteworthy counterbalance to the stereotypical war poets of England’s elite officer class. In contrast, Rosenberg came from a working-class immigrant family, born in Bristol in November 1890 of Lithuanian Jews who fled persecution and pogroms.

After moving to the East End of London at a tender age, Rosenberg exhibited a talent for art and the English language in school but his education was cut short at 14 due to financial constraints, after which he became an engraver’s apprentice. At 17, he took up artistic evening classes at Birkbeck College, and was in 1911 accepted into the prestigious Slade School of Fine Art. His first volume of poetry was published the following year.

Rosenberg arrived in France in June 1916, by which time both sides were firmly embedded along the Western Front and places like Ypres and Verdun had been turned into mass graves. His most distinguished poems from this period are astonishingly bleak and candid, even horrific. “Dead Man’s Dump” speaks of crunching bones as “the wheels lurched over sprawled dead,” of faces burnt, blackened, and decayed, of “a man’s brains splattered on a stretcher-bearer’s face,” a dying man’s weak scream, his “very last sound.”

His most widely-cited poem, “Break of Day in the Trenches,” is less visceral, and more subtle. It inverts the appearance of a traditional dawn poem so that it opens not with hope but in the total absence of it. “The darkness crumbles away,” he writes, describing now a “queer sardonic rat” leaps his hand as he pulls “the parapet’s poppy to stick behind my ear.” Examining the rat, Rosenberg wonders:

It seems, odd thing, you grin as you pass
Strong eyes, fine limbs, haughty athletes
Less chanced than you for life,
Bonds to the whims of murder,
Sprawled in the bowels of the earth,
The torn fields of France.
What do you see in our eyes
At the shrieking iron and flame
Hurled through still heavens?
What quaver — what heart aghast?
Poppies whose roots are in man’s veins
Drop, and are ever dropping,
But mine in my ear is safe,
Just a little white with the dust.

The other great subject of Rosenberg’s poetry from the war is Jewish identity. In “Through these Pale Cold Days,” he writes not only on the effect of 3,000 years of oppression and exile on the Jewish soul but on its reawakening in the advent of Zionism and new forms of Jewish self-expression. He sees how “their wild eyes yearn” and “their spirits grope for the pools of Hebron again — For Lebanon’s summer slope”:

They leave these blond still days
In dust behind their tread
They see with living eyes
How long they have been dead.

As the conflict dragged on, Rosenberg desperately wished to be transferred from the Western Front to the Jewish Battalion in Mesopotamia. In France, Rosenberg was an outsider, a Jewish soldier in a Christian army, and his two-stanza poem “The Jew” reflects the low-level, insidious anti-Semitism that was part not only of trench life but life in England as well:

Moses, from whose loins I sprung,
Lit by a lamp in his blood
Ten immutable rules, a moon
For mutable lampless men.

The blonde, the bronze, the ruddy,
With the same heaving blood,
Keep tide to the moon of Moses.
Then why do they sneer at me?

Isaac Rosenberg died early on the morning of April 1, 1918 during the Spring Offensive, a failed attempt by the German Army to win the war on the Western Front before American involvement could make its fullest impact. Aside from his war grave in a military cemetery near Arras, France, and a spot among the war poets in Poets’ Corner in Westminster Abbey, Rosenberg has never been fully validated or commemorated as one of the great writers of his generation — until now.

“Rosenberg’s poetry is difficult to read as it is somewhat abstract and lacks the lyrical beauty of Wilfred Owen’s poetry,” Clive Bettington, leader of the Rosenberg statue project, told the Forward when asked why Rosenberg has not been properly recognized. However, in spite of the disadvantages of his upbringing, Rosenberg “produced such excellent and heartbreaking poetry. Unlike most of the other British war poets he stayed in the ranks” — his poetry “spoke for the common soldier” and the unending bleakness of the Western Front.

Jewish War Poet Finally Getting His Due