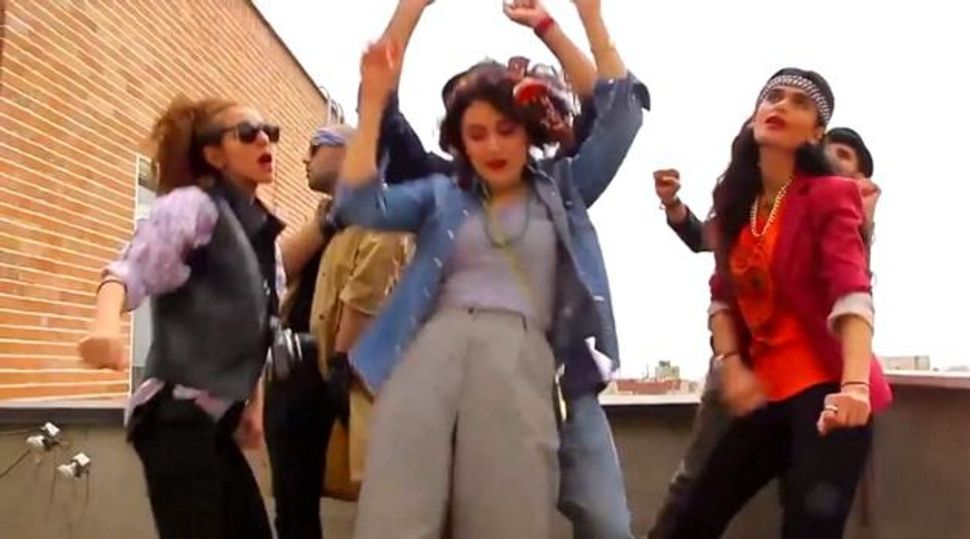 It’s a weird aftereffect of a Jewish day school education that, when I see a headline like “Iran Court Sentences ‘Happy’ Dancers to 6 Months and 91 Lashes,” I immediately ask myself: WWTDD? Or: what would the Talmud do?

You might remember that back in May, seven young men and women were arrested in Iran for recreating Pharrell Williams’ “Happy” music video and posting it on YouTube. Now a Tehran court has sentenced the dancers to six months in prison plus 91 lashes each. Luckily, the sentence was suspended, meaning that the verdict won’t actually be carried out unless the dancers repeat their “crime” in the next three years.

Still, it’s a harsh verdict, and everyone from Pharrell Williams to Iran’s own President Hassan Rouhani seems unhappy with how these kids have been treated. “It is beyond sad that these kids were arrested for trying to spread happiness,” Williams wrote on his Facebook page. “Happiness is our people’s right. We shouldn’t be too hard on behaviors caused by joy,” Rouhani wrote in a May tweet widely seen as expressing support for the dancers.

Likewise, my initial response was: Ouch! 91 lashes? Even the ancient rabbinic texts I studied in school didn’t recommended meting out that many! Then, to make sure my impulse was correct, I did a bit more digging into the wide world of rabbinic whipping.

At first, it seemed pretty clear that the ancient rabbis would view Tehran’s verdict as unduly harsh. The Torah recommends that floggings be administered under certain circumstances, but restricts the maximum number of lashes to 40 “lest being flogged further, to excess, your brother is degraded before your eyes.”

The Talmud takes this even further, reducing the maximum to 39, out of fear that too many lashes could result in an accidental death. It also requires that every person first be physically examined to determine the number of lashes they can safely sustain.

But all this applies only to punitive floggings; in disciplinary floggings (where what’s at issue is a Jew’s refusal to obey a positive command — like, say, “Build a sukkah!”) there’s no maximum to the number of lashes you can mete out. So, the Talmud says, when a person continues to disobey such commands, “he is flogged until his soul departs.”

What’s more, the rabbis weren’t exactly shy about using lashings as a deterrent. Floggings were often carried out in public places — the courthouse, the synagogue, the town square — for exactly this reason.

This same desire for a deterrent seems to be what’s behind the suspended sentencing for Iran’s “Happy” dancers. It’s not so much a sentence as a threat, an attempt to cow these kids and anyone else who might think to follow their lead into submission. Why else would the dancers have been made to appear on state television — looking terrified all the while — to explain that they were tricked into making this music video? Even without the 91 physical lashes, they’ve already received a metaphorical lashing in the form of that TV interview.

Though the same impulse now driving this Iranian sentencing also exists in Judaism, Jewish law hasn’t instituted this kind of corporeal punishment in ages. Of course, Judaism still has plenty of ways of deterring its adherents from behaviors it deems improper — take, for example, the social ostracism directed at recalcitrant husbands — and it’s worth remembering that metaphorical lashings can sometimes be every bit as powerful as bodily ones.

But for now, I’ll just be glad I don’t have to worry about getting 91, or 40, or even 39 lashes the next time I feel like a room without a roof…or like happiness is the truth.