Tidal Wave of Refugees as ISIS Grabs Chunk of Syria 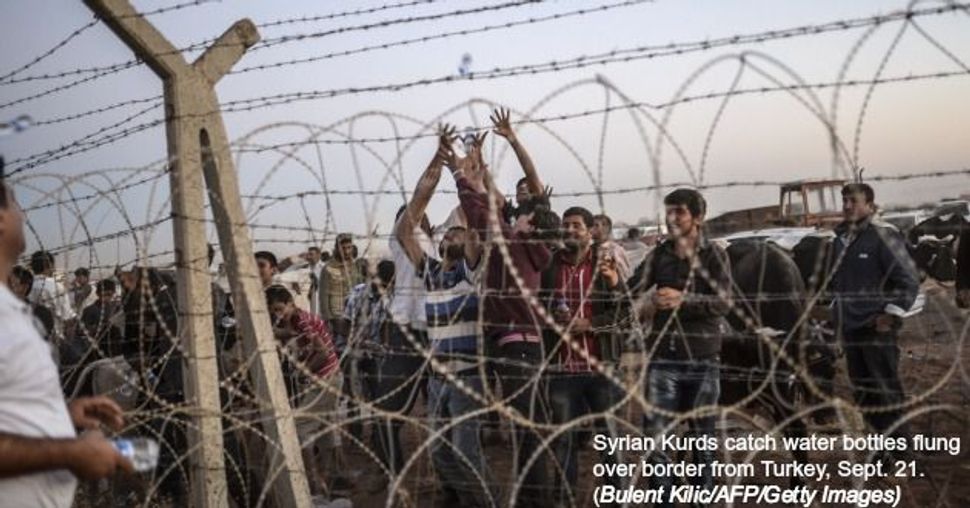 Something absolutely astonishing is going on right now in northern Syria along the Turkish border: refugees streaming on foot across the barbed-wire frontier by the tens of thousands, fleeing the advance of the terrorist army known as the Islamic State. As many as 100,000 refugees, mostly Kurds, have crossed the border in the past week — up to 60,000 on Saturday alone — while ISIS enters and occupies village after village with tanks and heavy artillery.

Hair-raising on-the-ground reports by National Geographic and Reuters reporters say ISIS has captured at least 64 Syrian villages since Tuesday, killing, burning and beheading as they go.

Twenty to 40 cities fell in the last 24 hours, and ISIS (The Islamic State in Iraq and Syria) is moving in with tanks and artillery and killing people in its path, so everyone dropped what they were doing. I was told it was a fairly stable Kurdish area until 24 hours ago.

The bizarreness of it all is that this was an influx of many middle class people wandering in wearing slacks and dresses and jackets, even carrying elegant handbags. It’s clearly a group of people that have not migrated like this before. They only brought the clothing on them or a roller, as if they were heading to the airport. Seeing them, I feel like I’m photographing myself, I’m witnessing the reality that can befall upon anyone of us.

Reuters, amid a flood of essential details about the situation, quotes one refugee, “Muhammet Abbas, a 40-year-old teacher who wore a blue cap as protection against the blazing sun” and “led a group of about 20 people including his wife and six children:

Everybody is scared … Where is humanity? Where is the world? They are killing us and nobody cares.

The Guardian has some good reporting today on the politics of mobilizing a force to counter the ISIS advance, including Western hesitation about cooperating with the main Syrian Kurdish defense force, which is an ally of the terrorist-branded PKK.

The New York Times offers a startling report about where America’s attention is focused: on a Syrian Al Qaeda split-off, Khorasan, that apparently is more directly focused than ISIS on hitting U.S. targets.

I mean, what’s the big deal about ISIS? All it’s doing is taking over a broad stretch of the Middle East, establishing a heavily armed, well-financed terrorist state and exterminating minorities. What does exterminating minorities in foreign countries have to do with American interests? We’ve had that debate already. I believe it was in 1938.

Tidal Wave of Refugees as ISIS Grabs Chunk of Syria