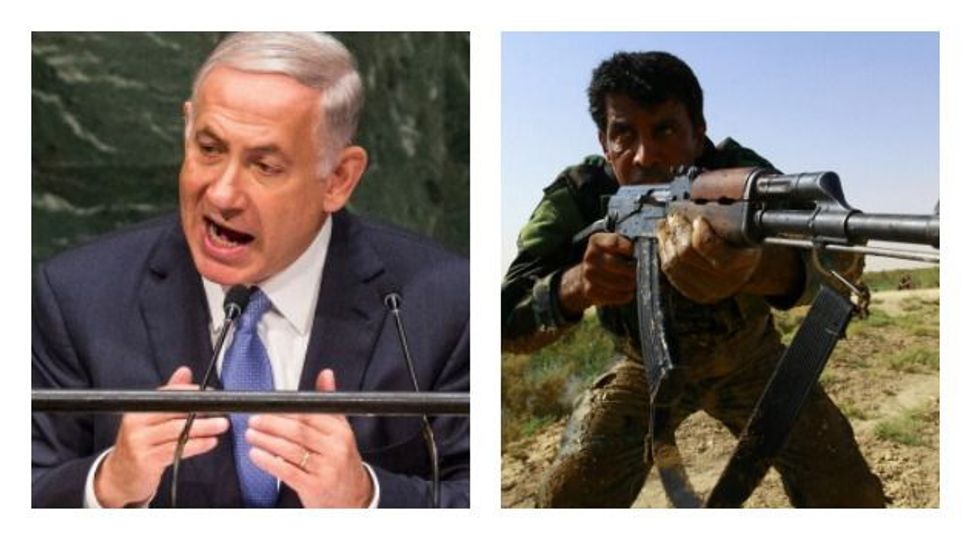 Speaking at the General Assembly this week, Israeli Prime Minister Netanyahu repeated a refrain he has sounded for three decades (since his days as Israeli ambassador to the U.N.) — that all forms of terrorism are different sides of the same coin and have civilization as their target:

So when it comes to their ultimate goals, Hamas is ISIS and ISIS is Hamas. And what they share in common all militant Islamists share in common. Boko Haram in Nigeria, Al-Shabab in Somalia, Hezbollah in Lebanon, Al-Nusra in Syria, the Mahdi army in Iraq, and the Al-Qaida branches in Yemen, Libya, the Philippines, India and elsewhere.

The startling assortment of groups; the lumping of a Shiite movement (Hezbollah) with those that can treat Shi‘a as apostates; the linking of Israel’s enemies with those now targeted by the United States — all this is politically convenient. But is it accurate?

Well, yes of course — in the same sense that France’s François Hollande, North Korea’s Kim Jong-un and Israel’s HaPoel Tel Aviv all spring from the same socialist movement. It’s not clear how such claims aid understanding, analysis or policy.

The rise of ISIS and its rivalry with other groups does pose a challenge but in a less direct way than Netanyahu suggests. In a visit earlier this month to Jordan, I found Da’ash (as ISIS is known according to its Arabic acronym) on everybody’s lips regardless of an individual’s political affiliation. Those of an Islamist bent regarded the upstart as a challenge and a rival, not an ally.

There seems to be some level of sympathy for Da’ash not because of the barbarity of its behavior but for its ability to threaten an international order that is seen as unjust. I spoke with Jordanian officials who seemed more concerned with the interest Da’ash generated among disaffected Jordanians than its actual core supporters.

But that places the leadership of some of the groups Netanyahu identifies in a very awkward position. On the one hand, they reject Da’ash’s ideas, methods, textual interpretations and agenda. On the other hand, they note that Da’ash defiance strikes some chords among the youth and that its actions grab agenda-setting attention. Their response is therefore somewhat guarded — to criticize Da’ash’s deeds and doctrines but in tones that fall far short of the horrified revulsion expressed elsewhere. The result sounds cagey and calculated — because it is.

Recent U.S. moves to engage Da’ash militarily may help these groups square the circle — not because the groups are all the same but because of the way in which they are rivals jostling for position. By turning their critical words against the U.S. — and thus shifting focus to the deeply unpopular U.S. military and security presence in most of the region — such rivals can maintain their distance from Da’ash without losing those whose inclinations might otherwise gravitate to more radical or disgruntled forces.

In two conversations with Jordanian Muslim Brotherhood leaders — one whose extremely hawkish views landed him in prison once and the other whose extreme dovish views have led to his estrangement from the movement — I was struck by the identical way they referred to Da’ash. They both brought it up (I was interviewing them for utterly unrelated work I’m doing on Islamic legal debates) and went on to describe it as a violent movement whose ways they found wrong but still saw as a product of the violence and occupation inflicted on the region. Such a stance was sincere — but also politically adept.

All actors are caught making some difficult political choices. Da’ash’s opponents of various stripes are trying to figure out how much they share and how much they can combat their foe militarily without aggravating the situation politically.

Israel likewise faces some difficult political choices with Hamas. Netanyahu’s formulation of the problem to an international audience may be politically useful in garnering sympathy for Israel in some circles. But when Israel turns its attention from speechifying to hard realities, it will likely conclude that its Hamas problem does not get easier by making it so much larger.

Nathan Brown is a professor of political science and international affairs at George Washington University.