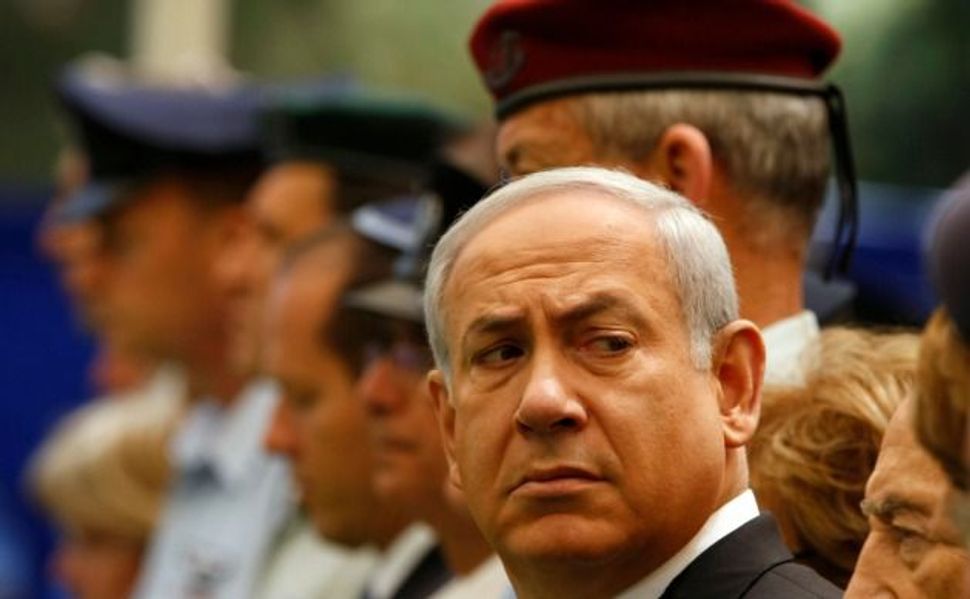 In what appears to be the largest-ever joint protest by senior Israeli security personnel, a group of 106 retired generals, Mossad directors and national police commissioners has signed a letter to Prime Minister Benjamin Netanyahu urging him to “initiate a diplomatic process” based on a regional framework for peace with the Palestinians.

Several of the signers told Israel’s Mako-Channel 2 News in interviews that Israel had the strength and the means to reach a two-state solution that “doesn’t entail a security risk,” but hadn’t managed to reach an agreement because of “weak leadership.”

“We’re on a steep slope toward an increasingly polarized society and moral decline, due to the need to keep millions of people under occupation on claims that are presented as security-related,” reserve Major General Eyal Ben-Reuven told Mako’s Roni Daniel. “I have no doubt that the prime minister seeks Israel’s welfare, but I think he suffers from some sort of political blindness that drives him to scare himself and us.”

The letter was initiated by a former Armored Corps commander, reserve Major General Amnon Reshef. He told Yediot Ahronot in an interview published Friday, and posted in English today on Yediot’s Ynetnews.com website, that he was “tired of a reality of rounds of fighting every few years instead of a genuine effort to adopt the Saudi initiative.”

He was referring to the Saudi-backed peace proposal that was adopted unanimously by the Arab League in 2002 (here is the full text) and later endorsed 56-0 by the 57-member Organization of Islamic Cooperation, with Iran abstaining. It has since been repeatedly reaffirmed and its terms softened. As currently framed, it offers full peace, diplomatic recognition and “normal relations” between the Arab states and Israel in return for Israeli withdrawal to borders based on the pre-1967 armistice lines, with negotiated land swaps, and a “just” and mutually “agreed” compromise solution to the Palestinian refugee problem.

The generals’ call echoes a proposal for a regional peace conference that was floated during the Gaza war this summer by Israel’s science minister, Yaakov Peri, a member of Yair Lapid’s Yesh Atid party and a former director of the Shin Bet security service. It’s currently being advocated within the security cabinet by Lapid and justice minister Tzipi Livni.

Netanyahu takes the position that Palestinian statehood at this juncture would imperil Israel’s security.

Retired generals have occasionally made joint statements in the past, but never in such numbers and rarely on political matters that aren’t directly related to army business. In January 2012, 52 ex-generals signed a petition calling for legislation to require military or equivalent national service for Haredi men. In November 2011, 19 ex-generals called on IDF chief of staff Benny Gantz to combat growing religious extremism in the army. In February 2010, 15 ex-generals signed a statement criticizing “leftist organizations,” including the New Israel Fund, that they said had damaged the IDF by aiding the Goldstone Report.

The 106 signers of the current letter to Netanyanu include 101 IDF veterans with the rank of brigadier or major general, as well as two former chiefs of the Mossad intelligence agency and three former commanders of Israel’s National Police. (Yediot’s report, which preceded Mako, gave a total of 105.)

The generals’ letter apparently doesn’t refer directly to the Arab Peace Initiative (I haven’t seen the letter’s full text yet), but in calling for a regional process it appears to rely on the willingness of the Saudis and Egyptians to sponsor a conference leading to negotiated peace that renders “the Arab-Israeli conflict ended,” based on the initiative.

The purpose of enlisting the neighboring Arab states is to give the Palestinian leadership backing and legitimacy to accept compromises it has failed to embrace on its own in bilateral talks.

Here are the portions of the letter published by Yediot (translation by Ynetnews):

We, the undersigned, reserve IDF commanders and retired police officers, who have fought in Israel’s military campaigns, know first-hand of the heavy and painful price exacted by wars.

We fought bravely for the country in the hope that our children would live here in peace, but we got a sharp reality check [literal translation: “but reality slapped us in the face” — jjg], and here we are again sending our children out onto the battlefield, watching them don their uniforms and combat vests and go out to fight in Operation Protective Edge…

This is not a question of left or right. What we have here is an alternative option for resolving the conflict that is not based solely on bilateral negotiations with the Palestinians, which have failed time and again… We expect a show of courageous initiative and leadership from you. Lead – and we will stand behind you.