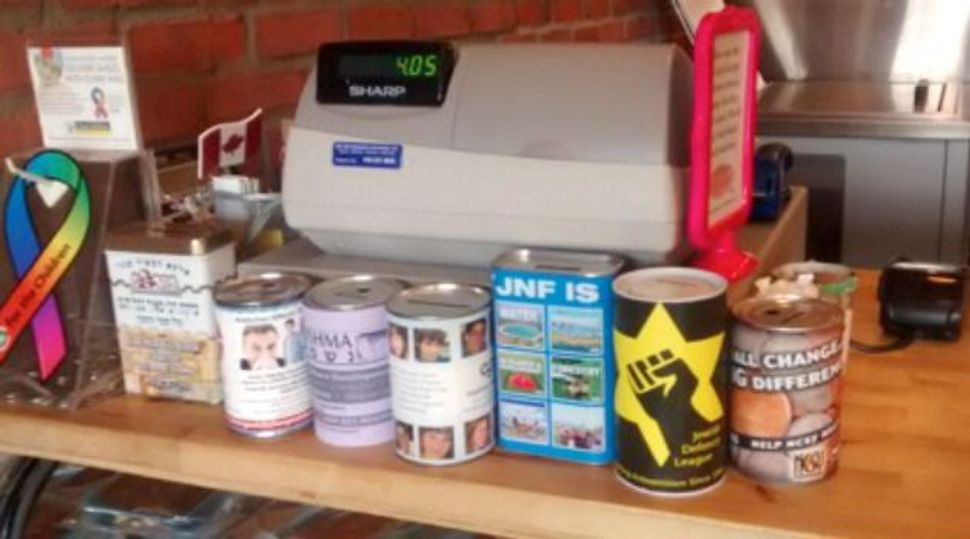 When the news hit my Facebook feed that Ben and Izzy’s, a restaurant in Toronto, had been named “North America’s Top Kosher Deli,” I immediately packed my bags. Under the guise of visiting family, I began a pilgrimage to what shalomlife.org called “one of the best delis around.” I have to say — the pastrami was perfect, the chicken soup was superb, though the lack of celery soda seemed a bit blasphemous. But what was less appetizing was yet another reminder that the Jewish community is beautiful, vibrant, caring — but also tainted by racism and Islamophobia. It’s about time we speak out.

This sad reminder came to me at the end of my meal. Next to the register, by the charity boxes for orphanages and social programs, I saw a black box with a raised yellow fist. I nearly lost my brisket. The Jewish Defense League (JDL) is soliciting in the #1 kosher deli in North America.

The JDL is a Kahanist organization that has been banned in Israel and the United States as a terrorist group. Its Canadian branch has been implicated in a long line of vigilante violence and fear-mongering. The fact that such a piece of dreck can solicit in a respectable Jewish establishment should make us sick to our collective stomachs.

But it doesn’t. That’s because the North American Jewish community, like its Christian and atheist counterpart, is infected with the scourge of Islamophobia. I define Islamophobia in the same way I define anti-Semitism: the delegitimization of a faith and the propagation of stereotypes and prejudice against its adherents. And it is endemic in our community.

It’s easy to find Islamophobia in fringe movements like the JDL. But it can be found in quieter forms across the Jewish spectrum. It exists in “mainstream” organizations like Aish Hatorah. Aish, which runs synagogues and youth programs across the continent, was associated with and possibly responsible for the fear-mongering “Obsession” video series that taught thousands of Jewish students and Birthright participants (as well as cadets of the NYPD) about the supposed Muslim plot to take over America with Sharia law. It exists in our synagogues, of every denomination. This Rosh Hashana, a Conservative rabbi made waves when he said five percent of the world’s billion Muslims were dangerous extremists (actually, he called them “Koran-waving, Allah Akbar-howling Muslim murderers”) and the rest were comparable to Germans who did not protest the Nazi regime. The Conservative movement has not denounced him.

Again, as figures like Bill Maher and Glenn Beck make evident, Islamophobia is not only, or even primarily, a Jewish problem. But it’s far too prevalent in a community that has historically stood at the forefront of civil rights causes on this continent. Judaism has a special relationship with Islam, as two religions that are centered around good deeds, prayer and an emphasis on charity and community responsibility. We should be the last to buy the message that Islam is a primitive, violent religion — especially when Muslim countries provided Jews a safe, though not equitable haven from thousands of years of Christian massacres.

Throughout the world, Islamophobic laws have also affected Jews. Anti-ritual slaughter legislation in Europe affected kosher meat as well as Halal. The ban on religious headgear in France and the attempted ban in Quebec targeted the kippah as well as the hijab. Anti-sharia legislation affects our beit dins (Jewish courts) and the protection of agunot (women whose husbands refuse to grant them a divorce).

In the fight against Islamophobia, Jews are not passive bystanders; we are secondary targets. We have an obligation to fight ignorance and educate ourselves about the many facets of our fellow Abrahamic faith. We have a duty to fight Islamophobia and any form of discrimination. Speaking out against baseless hatred and prejudice — well, that’s even more Jewish than pastrami on rye.

Menachem Freedman is a former IDF sharpshooter and current student at the McGill Faculty of Law. He is a board member of the Montreal Holocaust Museum Centre and the Ghetto Shul. The opinions expressed here are his own.