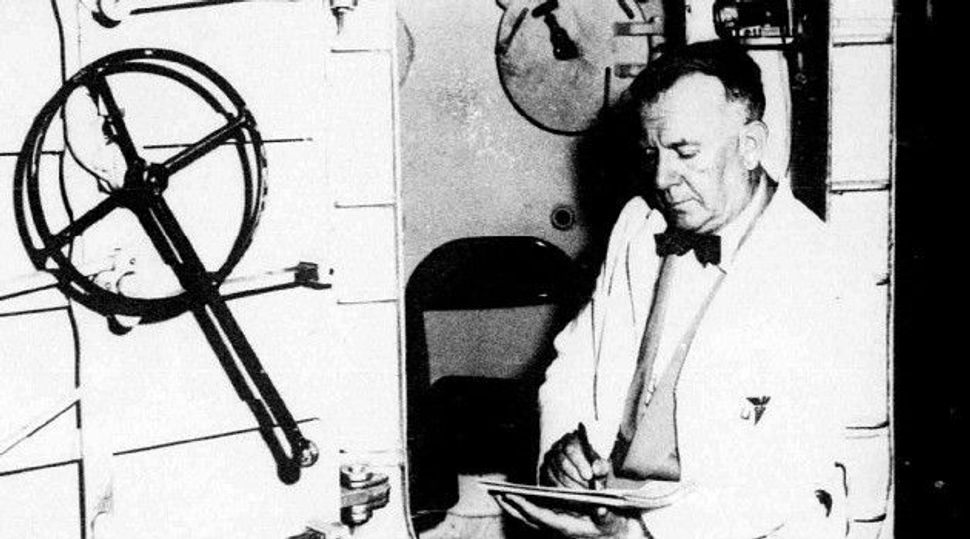 Hubertus Strughold worked for Hitler’s Luftwaffe throughout World War II — and was later recruited by the U.S. / U.S. Air Force

I got an email the other day from a Jewish man who saw something in Germany 60 years ago that he can’t forget. The man reached out to me after reading my story on Eric Lichtblau’s new book about the U.S. government’s coverup of its use of former Nazis as spies.

The man has asked that I not use his name, in consideration of promises he made in the 1950s to keep quiet on pain of court martial. Today he is a retired attorney. We’ll call him Robert.

Robert was inducted into the U.S. Army in the summer of 1954. Already a law school graduate and a member of the bar, he turned down a commission as an officer and enlisted as a private.

In January of 1955, after completing basic training, Robert boarded a troop ship in Staten Island bound for Germany, where the Army maintained a massive postwar presence. He landed in Bremerhaven and was sent on to a replacement depot to be assigned to a unit.

Robert’s assignment was unusual. Of all of the soldiers on his ship, he was the only one sent to a group called the 7807 USAREUR Liaison Detachment.

The name was a cover.

“It was really run by the CIA,” Robert said. “I reported to a civilian. A CIA civilian… He never said he was CIA, but he obviously was.”

Robert had been inducted into the 66th Counter Intelligence Corps, a unit tasked with counterintelligence operations in Germany.

The story is difficult to check. The records of the Army’s Counter Intelligence Corps are only recently declassified, and still incomplete, according to Richard Breitman, a professor at American University who has worked extensively in the archives. Such close cooperation between CIA and CIC is possible, Breitman said, though surprising, given that the agencies were in fierce competition in the late 1940s.

Yet the extensive use of former Nazis as spies by the CIC during the postwar period has been well-documented, both by Breitman and in Lichtblau’s book, “The Nazis Next Door.”

It’s a history that Robert says he saw first-hand.

Robert was dispatched to Frankfurt, where he and another G.I., also a Jew, were assigned to a mansion next door to the French consulate. The mansion lived a double life. By day, it was filled with American secretaries who checked visa applications against a list of registered Nazis. At night, it was a safe house for spies.

Robert had a hand in both sides of the mansion operation. His main role, however, was to stay behind at night in plain clothes and accept documents dropped by agents operating in East Germany.

One night, one of the agents said something disparaging about Jews that Robert couldn’t quite hear. The other Jewish G.I., a big man, took offense. “He picked this guy up and smashed him against the wall,” Robert said. The job had its perks. Since the 66th didn’t have a mess hall, Robert and the other man were given $6 a day to go out for meals, an extravagant sum.

“We had the best deal in Germany,” Robert said.

It didn’t last. One day, Robert says he was shown a visa application from an ethnically German Yugoslavian national. The Yugoslavian had applied for a visa before, in 1948, and stated at the time that he had never been a Nazi. Yet records now showed that he had actually served in the SS-TV, known as the Death’s Head-SS, the units that operated the Nazi death camps.

The visa was set to be accepted. Robert went to his supervisor, the civilian spook. “I said, how can we let this guy in?” Robert recalled. The civilian was unequivocal: “You gotta.”

Robert assumed that the Yugoslavian had been of service to the intelligence services.

“That was a big one to me,” Robert said. “You can’t get worse than the Death’s Head-SS.”

After that, Robert decided he needed to transfer. At first his superiors wouldn’t let him go. He had signed an eight-page agreement swearing him to secrecy, and they were reluctant to let him walk away. By the time he finally convinced a high-ranking officer to get him out of the job, he had been with the 66th CIS for a year and a half.

He’s kept the experience secret his whole life. “I never spoke to my wife about it,” Robert said. “I never told anyone, because, you know, it’s one of those things. You agree not to say anything.”