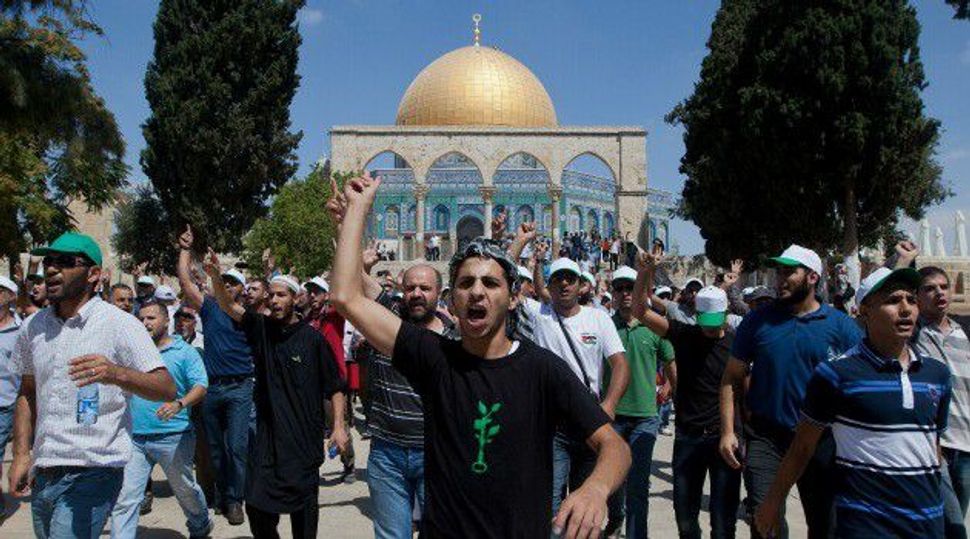 Once again Israel faces a deadly spiral of Palestinian violence, as the low-level rioting that began in East Jerusalem in July, following the murder of teenager Muhammad Abu Khdeir by a trio of Jewish hoodlums, gave way in late October to a series of lethal attacks with knives, guns and motor vehicles.

And once again, Prime Minister Benjamin Netanyahu and his security forces can’t get their stories straight.

Netanyahu has taken to declaring after each new incident that the spiraling violence is the result of “incitement” by the president of the Palestinian Authority, Mahmoud Abbas. Exhibit A is a fiery speech Abbas gave in Ramallah October 17, calling on Muslims to defend Al Aqsa — the silver-domed mosque atop the Temple Mount, considered Islam’s third-holiest shrine — and to use “any means” to prevent “settlers” from entering the site.

And indeed, five days after Abbas’s speech came the first deadly attack, when a Palestinian driver barreled into a crowded Jerusalem tram station, killing an infant and mortally wounding an Ecuadorian student. Netanyahu issued a statement blaming it on Abbas’s incitement.

Scare-stories of Jewish plans to encroach on the sacred compound, first by demanding equal prayer rights, later by razing the mosque and rebuilding the Holy Temple, have long been a favorite theme in Muslim anti-Israel rhetoric. Israel’s defenders dismiss such talk as rank demagoguery. Immediately after capturing the Old City and its shrines in 1967, then-defense minister Moshe Dayan left the mount in the care of the Muslim religious trust, the Waqf, with the Jordanian monarchy as custodian and guarantor. Every prime minister since then has reaffirmed the arrangement.

But the attacks have multiplied: the October 29 shooting of Temple Mount activist Yehuda Glick; the running down November 5 of a border policeman and others by another driver; a spate of stabbings on November 10 in Tel Aviv and in the West Bank. After each one, Netanyahu has repeated the incitement charge with growing vehemence. He said it in his weekly remarks to the Likud Knesset faction. He repeated it in speeches at Yitzhak Rabin memorial ceremonies. Ultimately he denounced the incitement in a major, televised address to the nation November 11, in which he discussed the snowballing violence and vowed to end it.

To end the violence, that is. It’s not clear he can do much about the incitement.

For that matter, it’s not really clear that Abbas is the problem. The day that Netanyahu was addressing the nation, Israel’s national police commissioner, Yohanan Danino, was telling an international police conference in Tel Aviv that the violence resulted from “incitement by extremists from all sides” — Arab and Jewish alike.

Danino was speaking delicately. Others have been more blunt. Defense minister Moshe Yaalon, in a television interview aired November 7, said that the latest rounds of violence were being “fueled” by right-wing Israeli cabinet ministers and Knesset members making ostentatiously “provocative” visits to the Temple Mount, inflaming Muslim sensitivities.

Israel’s Sephardic chief rabbi, Yitzhak Yosef, speaking November 7 at the funeral of a teenage car attack victim, blamed the death on “incitement” by Jews visiting the Temple Mount and “pouring oil on the flames” of “our enemies’ hatred.”

Their targets were a gaggle of Likud and Jewish Home lawmakers who’d made much-publicized visits to the Temple Mount earlier in the week. They included housing minister Uri Ariel of Jewish Home as well as deputy transportation minister Tzipi Hotovely, deputy Knesset speaker Moshe Feiglin and interior committee chair Miri Regev, all of Likud.

The four rightists are among a group of about a dozen Knesset members who’ve been pushing over the past year to end the post-1967 accord and permit Jewish prayer on the mount. This was once a fantasy of the fringe radical right, but it’s gone mainstream with the inauguration of the current Knesset in 2013. Regev authored a Knesset bill last May to establish formal Jewish prayer times on the mount. It’s been stuck in committee since then, opposed by Netanyahu, but it’s picked up momentum in the aftermath of Operation Protective Edge.

The prayer effort was the topic of a Jerusalem conference on October 29 sponsored by the Temple Mount Heritage Foundation, which is chaired by Rabbi Yehuda Glick, the shooting victim. Feiglin and Regev were among the speakers. Glick and Feiglin are both longtime advocates of rebuilding the Temple on the spot where it once stood, now occupied by the iconic, golden-leafed Dome of the Rock. Glick was shot as he was leaving the conference.

Tensions had been building on both sides for weeks. In early September, complaints from the Waqf and pressure from Jordan forced Netanyahu to shut down a new footbridge leading up to the mount from the Western Wall plaza. That decision brought accusations of capitulation from Temple Mount advocates.

The approach of the Jewish holidays later in September saw a dramatic increase in Jewish visits to the mount, along with increased pressure to permit Jewish prayer and violent confrontations between police and Muslim youths. On Wednesday, October 8, the eve of Sukkot, the most popular Jewish pilgrimage holiday, a radical Israeli sheikh called for Muslims to come to the mount to defend it.

That morning, police preparing to admit Jewish visitors were attacked by masked Muslim youths armed with stones, iron bars and Molotov cocktails. Police pushed the attackers into the mosque behind them. As fighting continued, police rushed into the mosque, a first. Over the coming days the rioting and skirmishes continued. On Sunday police blocked a group of Jewish activists from entering the compound. On Monday police locked a group of Muslim activists inside the mosque. Protest messages flew back and forth between Jordan, Israel and the United Nations. That Friday, Abbas delivered his speech in Ramallah. The following Wednesday was the first deadly car attack.

Four weeks and a dozen deaths later, on November 11, Yaalon met with a group of reporters and explained how events had escalated so far so fast. It began with the events on the Temple Mount, he said, according to Walla News, and spread to Jerusalem, then to the West Bank “and, sadly, into the Israeli Arab community.”

“Because the atmosphere is one of incitement and escalation, anyone who takes a notion to stage an attack, to become a martyr as they call it, can simply act, and each successful attack inspires the next one. Our working assumption is that it’s going to get worse.”

As he spoke, his boss was addressing the nation, blaming Abbas. Unlike his advisers and security chiefs, Netanyahu couldn’t blame the extremists. He needs their votes to keep his job.