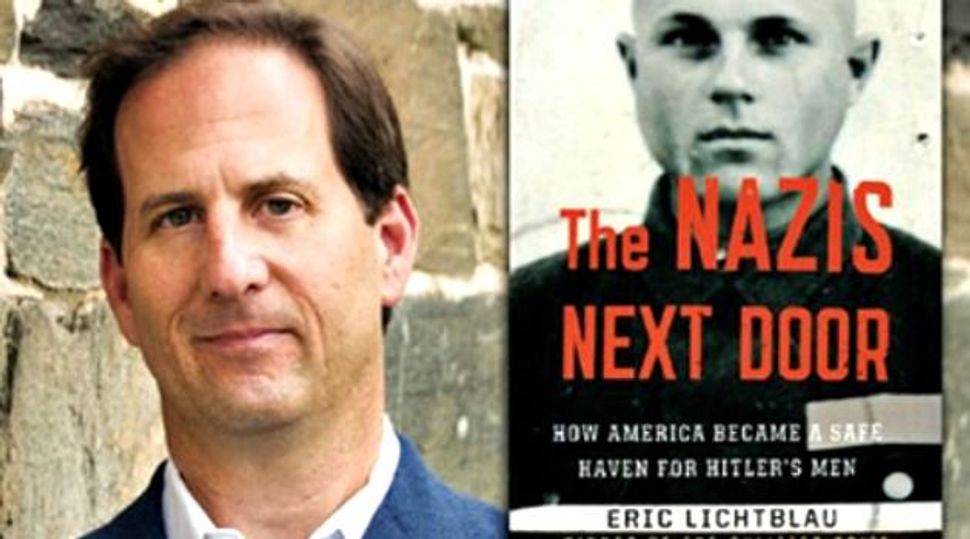 Eric Lichtblau and his new book, “The Nazis Next Door.”

It’s not often that a museum director gets booed on his own stage.

Yet that’s what happened to David Marwell in the auditorium of the Museum of Jewish Heritage in downtown Manhattan, when an event on New York Times reporter Eric Lichtblau’s new book, “The Nazis Next Door,” went sour.

The $15 afternoon event on November 9, which played to a busy house, was structured as a conversation between Marwell and Lichtblau. It soon devolved into an unmannerly three-way colloquy with an angry audience.

They fought a bit over the relative culpability in the Nazis’ crimes of the German scientists brought to the U.S after the Second World War. But the point that drew the loudest audience shouts was an obscure dispute over what impact General George Patton’s anti-Semitism had on conditions in the displaced persons camps in Europe following the collapse of the Nazi regime. Marwell thought that Lichtblau overstated Patton’s role.

“When he said Patton’s views infused and characterized the treatment of DP’s throughout the postwar period, I said, ‘Eric, you simply can’t say that,” Marwell told the Forward. “And that’s when I got the boos.”

Marwell said it was the first time he had ever been the target of an angry audience’s shouts in his 14 years as director of the museum.

Lichtblau was still angry at Marwell days later. The New York Times writer defended his point about Patton, but said the dispute went past that. “He seemed to be going out of his way to minimize the horrible conditions and the impact of the anti-Semitism,” Lichtblau said. He termed Marwell’s Patton comments “insensitive and frankly pretty offensive,” adding, “That’s when people started booing.”

Marwell said he was pointing out that Patton was only responsible for the camps for a few months before he was replaced. “There were education efforts” in some DP camps, Marwell said. “There were cultural efforts, there was a beginnings of the rebirth of life and community that were rooted in the DP camps.”

The dispute gets boggy very fast, and the museum says the event wasn’t recorded. Days later, the dustup between the two men looks a bit like a clash of egos — and a lot like a historian’s attack on a journalist’s popular history.

Based on extensive original research in long-secret files, Lichtblau’s book has received widespread praise and much press coverage, including in this outlet. It’s a journalist’s book, snappily written, with a strong narrative.

Marwell is a historian. He has a doctorate in modern European history and has worked both for the Justice Department’s Office of Special Investigations, which rooted out Nazi war criminals who found refuge in the U.S., and ran the Berlin Document Center, a trove of Nazi documents.

“It reads like a pulp novel, in a way,” Marwell said. “My concern about the public reading it is that they would believe that all Americans in the postwar period — I’m overstating this, but — were moral cretins and bumblers. That’s a message that comes out. And that every German was a war criminal with blood dripping from their fangs.”

Lichtblau thought this was unfair. There are villains in the book, he said: Patton, for one, and Allen Dulles, the postwar CIA director, and J. Edgar Hoover, the longtime FBI director. “That’s nowhere near saying that all of America is morally complicit,” Lichtblau said. “If he took that away, he is wildly inaccurate.”

Lichtblau was unaware before the event that Marwell hadn’t liked his book, and didn’t expect a debate going in. “He saw this chance to really attack, that’s the only word for it, attack the book, and, in doing so, made a whole series of really startling and odd comments,” Lichtblau said. “It turned into an ugly spectacle.”

Beside the Patton contretemps, Lichtblau objected to a point Marwell made about the immigration of German scientists to the U.S. after the war, a project known as Operation Paperclip. “Marwell seemed to be suggesting that I had understated the Cold War value of the Nazi scientists and [overstated] their links to Nazi war crimes,” Lichtblau wrote in an email to the Forward. “I noticed people in the audience looking surprised, and a few seemed to be murmuring amongst themselves.”

Marwell insisted to the Forward that he was right on that point. “The fact is, in [Operation] Paperclip, which has been written about a lot, not everyone was a Nazi,” he said.

During the book signing that followed the event, Lichtblau says that about a dozen people told him they were offended by the event.

“I thought it was an embarrassment for the museum to have its own director being booed by audience members — some of them Holocaust survivors,” Lichtblau told the Forward in an email.

Marwell thought the event was better for the conflict. “I actually think the public got a much more interesting event,” he said. As for Lichtblau’s feeling of being ambushed? “I asked Eric questions and he answered them. I didn’t muzzle him, I didn’t cut him off. He’s a big boy, he’s an expert investigative reporter. It may have been something he didn’t expect. It wasn’t unfair.”