I Admit It — I’m Binational-Curious 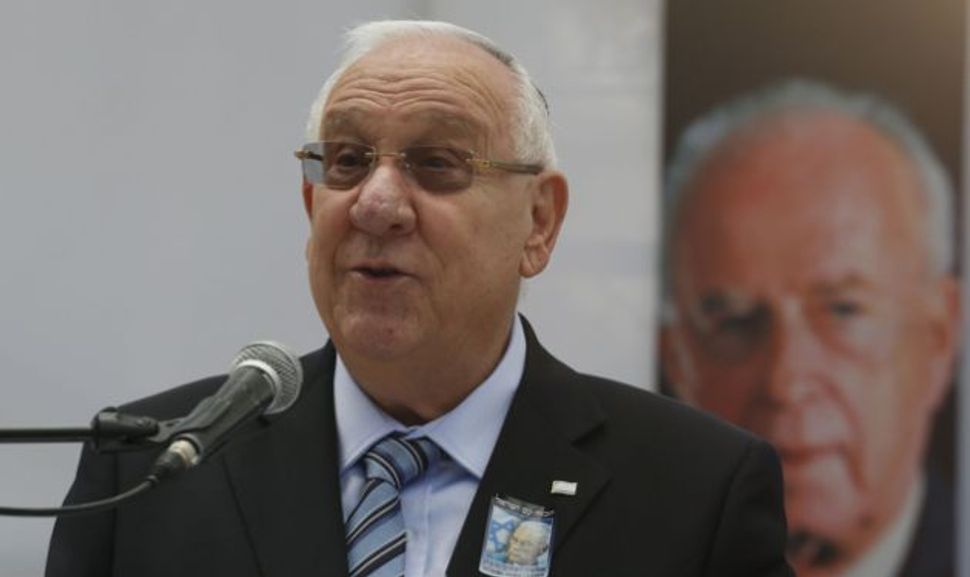 One Stater In Chief: Israeli President Reuven Rivlin has a different vision of the region’s future. Image by Getty Images

For at least a generation, the Israeli-Palestinian conflict was the oddest in the world. No one knew how to solve it, yet everyone knew what the solution was: two states, the 1967 lines with land swaps, a creative solution on Jerusalem.

Within a couple of years, this consensus has begun to collapse. In short, the Israeli right has won: The two-state solution is no longer inevitable. It barely even seems probable.

Others, myself included, have argued that this victory is a Pyrrhic one. At some point soon, the international community will run out of tolerance for Israel’s creeping apartheid, and the nightmare of conservatives — the whole world is against us! — will indeed come to pass.

Maybe we’re wrong. But in either case, it is remarkable that so many people have become — to borrow language from LGBT culture — bi-curious. Binational curious, that is: increasingly open to considering a binational state, a one-state solution, a confederation, and other varieties of Israelis and Palestinians living under the same flag. Since that’s worked so well up till now.

Case in point: David Remnick’s disturbing piece in a recent issue of The New Yorker. Pasting together a troubling portrait of racism in Israel and an assessment of one-state possibilities, Remnick wonders aloud whether Israeli democracy can continue. We visit Israeli President Reuven Rivlin, a non-racist one-stater; Jerusalem Post columnist Caroline Glick, a hysterical one, and left-wing activist Meron Benvenisti, a prophetic one. We see how left and right are beginning to meet each other in their joint rejection of two states for two peoples.

And we learn that two-state supporters are dropping like flies: Sari Nusseibeh, Ahmed Qurei. Even Shimon Peres seems out of ideas.

Yet Remnick omits one detail: details. Nowhere in the piece do we get any sense of how a binational confederation, or Israeli rule, or any other non-two-state solution, would actually work in practice. “When you get into prescriptions,” Benvenisti tells him, “people tend to dismiss the diagnosis.”

Later on, the late Edward Said is quoted as saying: “The question of what is going to be the fate of the Jews is very difficult for me. I really don’t know.”

Nor do we hear any details from the right side of the aisle. Rivlin never explains how his one-state solution would work. Nor does Glick, or Naftali Bennett, or anyone else. Not to Remnick, anyway.

This is outrageous non-journalism. Not a single “solution,” on the left or the right, has any plan for implementation?

The reality is, one-staters are one-sided.

Right-wing one-staters agree with Sheldon Adelson that Israel will not remain a democracy. That’s the only way to square the demographic circle. If Israel annexes the West Bank, it has to disenfranchise the Palestinians who live there. Otherwise, no Jewish state within a few decades.

Conversely, if Palestine effectively takes over Israel — one person, one vote — there also won’t be a Jewish state among the 196 countries in the world.

Remnick gives plenty of airtime to Benvenisti’s claim that 1948 is no different from 1967 and that Zionism is indeed racist at its core. And he marshals plenty of evidence to support it, from racist soccer fans to right-wing zealots now targeting Rivlin the same way they once targeted Yitzhak Rabin.

Israeli liberals, meanwhile, are waved away. The Labor Party, Meretz, the New Israel Fund — meh. Deck chairs on the Titanic. The fact that American dollars are lurching Israeli politics rightward — not mentioned. As if to underscore the infirmity of the two-state solution, its sole Israeli advocate is Peres, who speaks only 14 words in Remnick’s piece. Its only Palestinian one is Mahmoud Abbas adviser Husam Zomlot.

Now, one could argue that they’re not whom this piece is about. But to give binationalists a pass on explaining how any of their proposals could work, while at the same time omitting the proposals that could work — surely this is irresponsible.

And commonplace. I admit to being binational-curious myself. I’ve talked out the options with left-wingers and right-wingers, some in the Knesset, some in the punditocracy and some at dinner tables. None of them, left or right, can ever explain how his or her plane will fly.

How and by whom would scarce resources (for example, water) be allocated? Who would set foreign policy? Would Palestine really secure the human rights of Jews? Would Israel really secure the human rights of Palestinians? Whose finger would be on Israel’s nuclear button? Are there other small states massively supported by Western aid in which 3.5 million “citizens” cannot vote?

At least Israeli supremacists have answers to the practical questions: Israel decides, Jews stay in power and Palestinians feel more defeated every day until they’re finally broken into submission. This ideology hasn’t shifted since Ze’ev Jabotinsky uttered it 100 years ago: The only way to win this conflict is to beat down the other side.

If the world will let you, that is — a question that Jabotinsky himself never had to confront, and one that the Israeli right cannot answer today. We may have to wait a decade for the West Bank to become as illegitimate as Transkei and Bophuthatswana, but it will happen.

Palestinian one-staters, meanwhile, seem blissfully unaware of the facts on the ground — 6 million Jews, more than a few zealots, an army — and of the political fact that Israel is not actually South Africa. Israel in 1948 was not a colony of Europe; the majority of Jewish Israelis are not from Europe, and if recent history teaches us anything, it’s that the proposition that Jews should go “back” to Europe is, itself, racist.

So my bi-curiosity remains un-sated. Like everyone else in the peace camp, I am dejected by the current state of affairs and pessimistic about the future. I’m exhausted by Israel’s unethical behavior, by renewed (and condoned) Palestinian terrorism and by vulgar, bloviating billionaires dictating policy by checkbook. I am ready to stray from my two-state views, and I am open to all other realistic options.

Unfortunately, there aren’t any.

I Admit It — I’m Binational-Curious