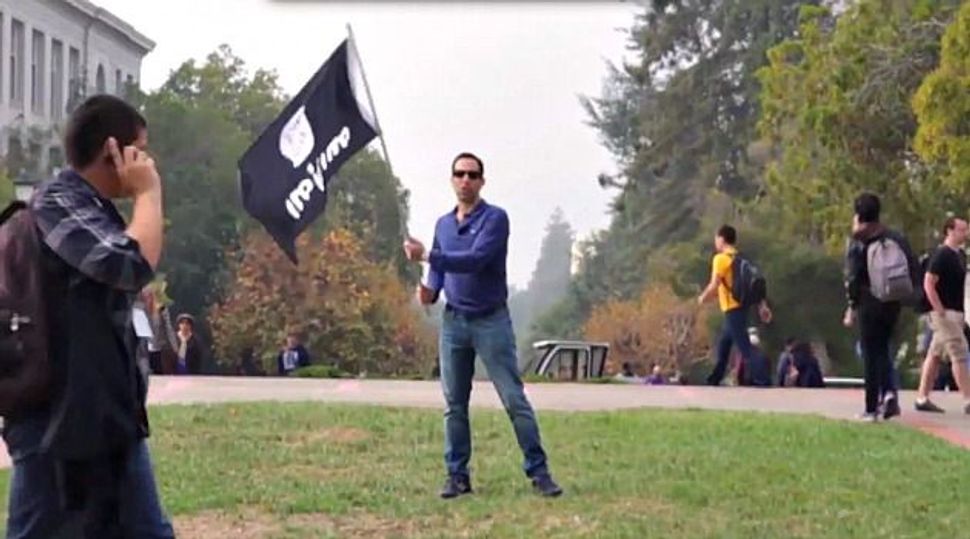 What do American students hate more: ISIS or Israel?

Media personality Ami Horowitz took to the University of California, Berkeley campus to find out — by way of a strange experiment.

The students’ vitriolic reaction to the Israeli flag, as compared to the ISIS flag, is striking. A few caveats, though:

First, it seems likely that many of the students just don’t know an ISIS flag when they see one — it’s much newer and much less recognizable than the Israeli flag.

Third, some students may have avoided confronting Horowitz when he was waving the ISIS flag simply because he seems totally loony — they think ISIS is beyond the pale of what any reasonable person might support, so it’s just not worth engaging. The fact that they don’t stop to argue or yell expletives at him doesn’t mean they view ISIS more kindly.

All that said, this video is still pretty eye-popping.

We’ve all heard about the rising tide of anti-Israel sentiment in the wake of the Gaza war. We’ve all read how country after European country is voting to recognize Palestine as a state. And we all know that an increasing number of people — especially young people — are fed up with Israel’s 47-year “temporary” occupation.

But this video illustrates that phenomenon with a starkness we haven’t seen before.

Here’s what Horowitz himself had to say about the video:

I have always thought that there was no connection between intellect and wisdom. To put this theory to the test, I headed out to the University of California, Berkeley. Students at Berkeley clearly have a lot of intellect; it is one of the most prestigious and selective universities in the country. But do they have wisdom? I went to the bucolic campus armed with a flag that represents the greatest evil known today, ISIS. If these are our best and brightest then we should all be afraid, very afraid.

There’s another way to look at this, of course: If America’s best and brightest think Israel is comparable to “the greatest evil known today,” then Israel should be afraid, very afraid.