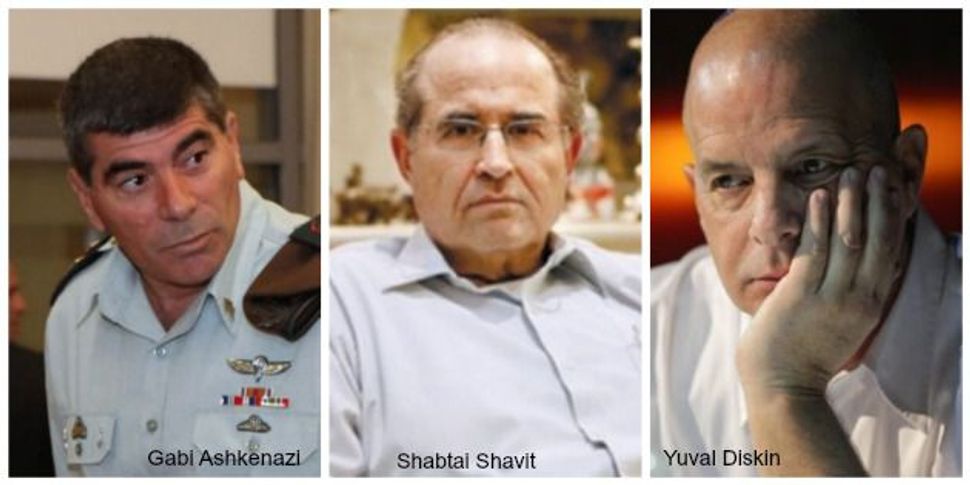 Three of Israel’s most senior ex-defense officials came out last week, almost simultaneously, with blistering attacks on the security policies of the Netanyahu coalition. Appearing in separate forums, the three — former Mossad director Shabtai Shavit, former Shin Bet director Yuval Diskin and former IDF chief of staff Gabi Ashkenazi — each charged that the government is endangering Israel’s future by allowing right-wing extremists to sabotage prospects for a two-state solution, putting the country on a path toward a single, binational state that will be plagued by continuing ethnic strife.

Two of the attacks appeared as op-ed essays in last Friday newspapers. One, by Diskin, appeared in the mass-circulation Yediot Ahronot. Titled “What lies ahead for Israel” (in English here), it argues that the current “Jerusalem intifada” is a “microcosm” of what awaits Israel if it does not resume serious peace negotiations with the Palestinian leadership. Diskin is particularly critical of the “inflammatory propaganda” and “brainwashing” that depicts Palestinian leader Mahmoud Abbas as an obstacle rather than a partner, when in fact, he writes, Abbas is strongly opposed to terrorism and maintains a “clear policy” of security cooperation with Israel.

The second, by Shavit, appeared in the liberal-leaning Haaretz. Titled “Blindness, Stupidity, Cause for Concern” (here, Hebrew only), it worries about the “haughtiness and arrogance” among “central factors in religious Zionism,”

together with more than a bit of the messianic thinking that rushes to turn the conflict into a holy war. If this has been, so far, a local political conflict that two small nations have been waging over a small and defined piece of territory, major forces in the religious Zionist movement are foolishly doing everything they can to turn it into the most horrific of wars, in which the entire Muslim world will stand against us.

I also see, to the same extent, detachment and lack of understanding of international processes and their significance for us. This right wing, in its blindness and stupidity, is pushing the nation of Israel into the dishonorable position of “the nation shall dwell alone and not be reckoned among the nations” (Numbers 23:9).

[Postscript: An English version appeared Monday morning under a different title: “Former Mossad chief: For the first time, I fear for the future of Zionism.” I’ve replaced some of my translations with Haaretz’s text.]

Shavit worries that as hope of a peace agreement dissipates, increasing numbers of Israelis are seeking foreign passports. He urges Israel to signal a willingness to enter a peace negotiation under joint U.S.-Saudi sponsorship, based on the 2002 Arab Peace Initiative, and to turn away from the “foolish” and “destructive” policies of the far right, which threaten “the destruction of the Zionist vision.”

The third attack came in a speech to a forum of insurance executives on Wednesday by Ashkenazi, the former IDF chief of staff. The speech was behind closed doors, but portions were leaked by members of the audience to columnist Ben Caspit of the conservative daily Maariv (here, Hebrew only).

Ashkenazi is quoted as saying that Israel’s internal, socioeconomic problems pose a greater threat to the country’s future than its security problems. “They’re scaring us unnecessarily,” he said, apparently referring to the parties of the right. “There’s no reason to be afraid. Israel is not under an existential threat. We’ve faced much worse threats before. Israel is the neighborhood bully. Nobody comes close to her military and social strength.”

“The target solution to the conflict is two states for two peoples, and an extremist minority on both sides should not have the right to veto progress toward this target, which is in the interests of both peoples.”

The three frontal attacks come less than a week after the bloody attack on Jewish worshippers in a West Jerusalem synagogue by two East Jerusalem Palestinians armed with a gun and butcher knives, that left five Israelis dead. Prime Minister Netanyahu immediately blamed the atrocity on “incitement” by Abbas, but hours later the current head of the Shin Bet, Yoram Cohen, appeared before a Knesset committee and denied that Abbas was promoting terrorism.

They also come three weeks after the publication of an advertisement in Israeli newspapers, signed by more than 100 retired IDF generals as well as two former Mossad chiefs and three former national police commissioners, calling on the prime minister to embrace the Arab Peace Initiative and work for a regional peace conference. The ad’s initiator, retired Major General Amnon Reshef, addressing an informal press briefing in New York last Wednesday, said more retirees had signed the statement since it first appeared and the number of generals and intelligence chiefs now topped 150, including Shabtai Shavit.

Diskin, 58, headed the Shin Bet security service from 2005 to 2011. He and Ashkenazi, who headed the IDF 2007-2011, were known to have worked quietly with then-Mossad chief Meir Dagan (served 2002-2011) to block a military strike against Iran, which they viewed as reckless and counterproductive. All three were replaced by Netanyahu months later.

Since retiring both Diskin and Dagan have repeatedly accused Netanyahu of recklessness, undue alarmism and unwillingness to seize existing diplomatic openings. Diskin has been talked about as a possible leader of a united leftist bloc in upcoming elections, but he announced in early November that he will not run for office in the upcoming cycle.

Ashkenazi, 60, was once considered a future contender for Labor Party leadership, but his star has been dimmed by ongoing fallout from the so-called Harpaz Affair, a dirty-tricks scandal related to a feud between Ashkenazi and then-defense minister Ehud Barak.

Shavit, 75, headed the Mossad, Israel’s foreign intelligence agency, from 1989 to 1996. Since retirement he’s emerged as one of the most respected elder statesman of the Israeli security community, informally advising governments on defense and intelligence matters and serving on military investigative commissions. His current critique is a sharp departure from his past practice; just last June he told me in an interview that former security heads should not publicly criticize the government on defense policy. Apparently circumstances have led him to reconsider.