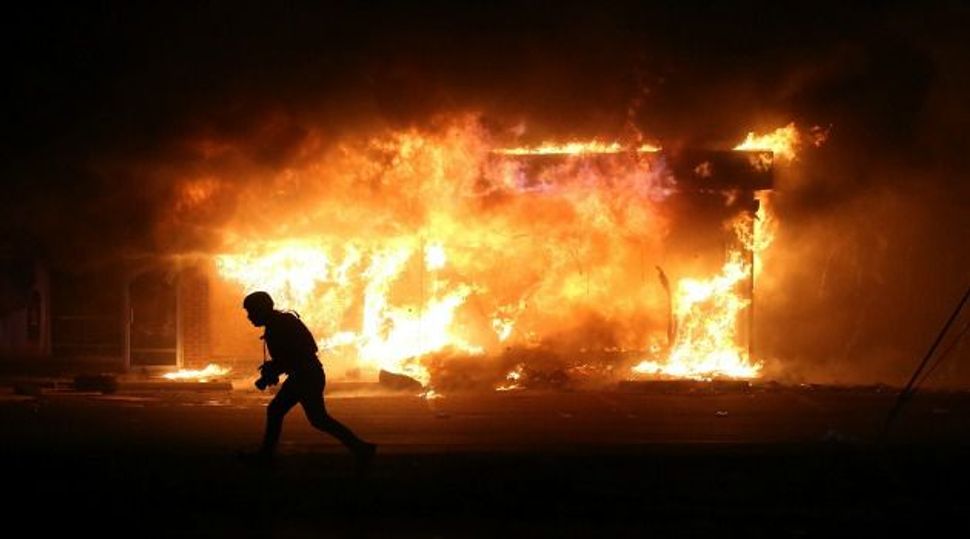 A man runs by a burning building in Ferguson during a demonstration protesting the grand jury’s decision. Image by Getty Images

“Set yourself judges and officers in all your gates,” says Deuteronomy 16:18, two verses before the Torah’s famous injunction, “justice, justice, shall you pursue.”

Biblical commentators have observed that the two commandments are related: Because the judges are appointed by the Israelites themselves, they are responsible to the community, and can dispense justice fairly.

The exact opposite is the case in St. Louis County.

Like it or not, the nine white members of the grand jury that failed to find even probable cause to indict Officer Darren Wilson do not come from the same community as his victim, Michael Brown (there were also three black jurors). Nor is the prosecutor, Robert McCulloch, who seemed as outraged at Twitter as at the fact that a young man was killed. Nor are 95% of the police officers in Ferguson, Missouri, a town that is 67% black.

So, while it is too early for anyone to have digested the 4,799 redacted pages of testimony presented to the grand jury, its conclusions are already suspect. These are not judges appointed in the reflexive tense. They are judges imposed by a dominant culture upon a subjugated one. The fact that the dominant culture’s spokespeople refuse to acknowledge this fact only reinforces its truth. White folks may insist on “we,” but many black folks still see us and them.

Do you buy Wilson’s version of events? At least four members of the grand jury did. Brown, possibly stoned, walking down the center of Canfield Drive, refuses to heed Wilson’s demand that he move onto the sidewalk. “Fuck what you have to say,” he says. Wilson, still in his car, corners Brown and his friend, opens his car door to get out. Brown charges the car. “Get the fuck back,” Wilson says, drawing his gun. “You’re too much of a pussy to shoot me,” Brown taunts. Wilson retreats into the car, and they fight over Wilson’s gun. Wilson says he felt like a child grabbing hold of wrestler Hulk Hogan — Brown is a huge, menacing presence. But he gets the upper hand, tries to shoot. The gun fails to fire at first, then it shatters the car window. Brown is startled, possibly shot. He flees, Wilson follows. Brown turns and charges — Wilson says Brown is so angry, he looks like a demon. Wilson shoots, Brown falls to the ground.

That’s one side of the story, anyway. We don’t get to hear Brown’s, of course. And his friends didn’t do him any favors, with contradictions in their testimony and changes in their stories.

Most white people, the statisticians tell us, buy Wilson’s story. Most black people do not. Why?

Centuries of discrimination, injustice, violence, fear, myth-making, stereotypes, oppression, crime, poverty, exploitation, and mistrust. Many white people can sympathize with Wilson’s descriptions of the 6’5 Brown as a wrestler or a demon; white people have been scared of black folks since they trapped and enslaved them 300 years ago. Many black people know that all too well.

Maybe Wilson was trigger-happy, defensive, and scared. Maybe he’s being protected by a pro-cop prosecutor whose biases are unclear even to himself — the same prosecutor who denied that white cops can kill black males with impunity. Even though “impunity” — not being punished — is exactly the result here.

Not even probable cause — not even a significant possibility that Wilson’s story doesn’t square with the facts. By saying, effectively, that race had nothing to do with it, the grand jury shows why race has everything to do with it.

A parallel: Fox News’s Bill O’Reilly recently said, on The Daily Show, that there is no more racism in America. That statement, itself, perpetuates racism precisely by insisting, ludicrously, that it does not exist. O’Reilly’s privilege is so complete that he can’t even see it.

Are there good reasons to doubt Wilson’s testimony? Sure there are. Just as the grand jury credited some evidence and discounted other evidence in a way that reflects centuries of racial bias, so might’ve Wilson. The way he describes Brown — Hulk Hogan, a demon — it’s clear he’s terrified of him. Why the terror? Brown’s behavior, surely, but also Wilson’s own experiences, fears, and prejudices. How much of each? We may never know.

None of this is to comment, really, on the facts of this case — only on its disposition. How can the black residents of Ferguson (or anywhere else) feel like justice is served when it is meted out by white people, for the benefit of white people? Some white folks believe we’re all colorblind now. But the disposition of this case — not even a verdict, but a decision that a verdict need never be reached — strongly suggests that we aren’t.

When agents of justice come almost entirely from the dominant segment of society, there can be no justice for all. Even if Darren Wilson is innocent, which he may well be, this system is guilty.