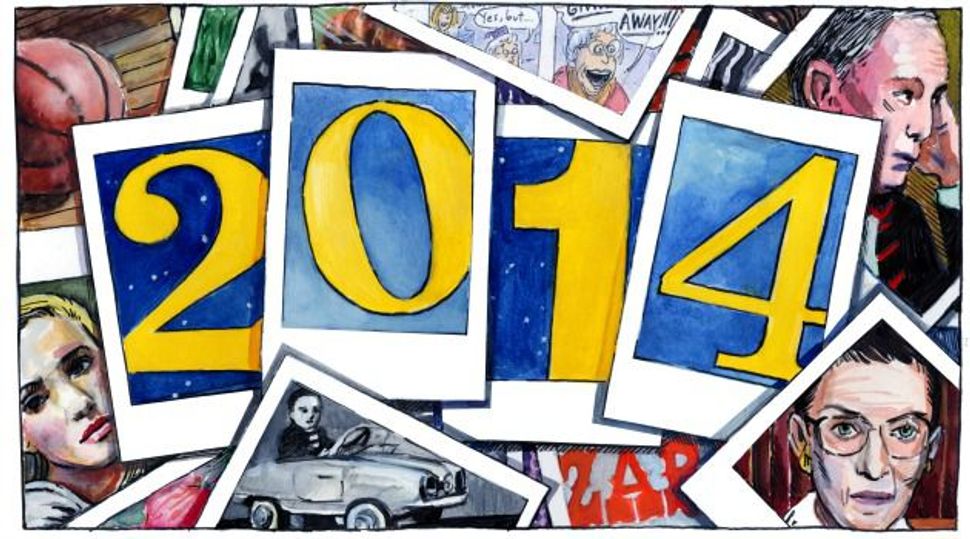 As we say farewell to twenty fourteen To the joys, sorrows and all in-between, Let’s remember that when it comes to the Jews There is no such thing as too much good news!

Could this be the year of women, we asked. The Forward 50 had more than years past. Leadership, alas, remains a man’s game But we’ll cheer progress, whatever its name.

Who else but Ruth Bader Ginsburg could be Famous as Notorious R.B.G.? Idina Menzel lets all children know That if they are “Frozen” — just let it go!

When the worst happened and her son was killed, Rachelli Fraenkel was able to build A community of grief that transcended And brought together those whom war upended.

Let’s hear it for the rabbis in our midst! Angela Buchdahl headlines our short list. Her mind, heart and voice — all are sublime. She’s the “mash-up” leader of our time.

Even a nebbish like Gary Shteyngart Turned a Gen-X memoir into high art. Ilana Glazer made “Broad City” with a friend. While 50 years ago Henry Sapoznik launched the klezmer trend.

Scarlett Johansson’s plug for SodaStream Showed she could really take one for the team. So did Shelly Sterling, who got hubby Don To sell the Clippers (but not keep his pants on).

To Barbara Kirshenblatt-Gimblett we say Thank you for giving Polish Jews their day. New ambassador David Saperstein Guards the world’s faiths from threats seen and unseen.

Barton Gellman, crusading journalist, Amy Cohen, traffic safety activist, Who can champion justice with a hashmark? Why Stosh Cotler, the new head of Bend the Arc!

Chava Karen Knox helps Detroit to farm. Safra Catz now has the Oracle charm. Leah Vincent’s strong plea in “Cut Me Loose” Reminds us why we need to call a truce.

Sadly, not all Jews did something to praise. Barry Freundel’s uncomfortable gaze Caused his D.C. shul heartache and pain. Let’s hope such abuses are on the wane.

We said goodbye to our dear Leonard Fein Who lifted our sights until his last line. We will miss the grace of Lauren Bacall, Eli Wallach, Mike Nichols — champions all.

Joan Rivers, Sid Caesar, Harold Ramis Incomparable masters of comedy’s bliss. Ariel Sharon had been missing for years But his final passing brought many to tears.

To Steven Sotloff we pay solemn tribute. And recognize all those who contribute. The struggle for justice seemed endless this year Peaceful solutions no longer so near

That’s why we are eternally grateful To donors, advertisers and the faithful Readers who join us in print and online And continue to treasure the Forward byline!

We wish you a year of sweetness and light May your health be sturdy, your troubles slight, May peace embrace a little more of our lives And may we all be together in two zero one five!