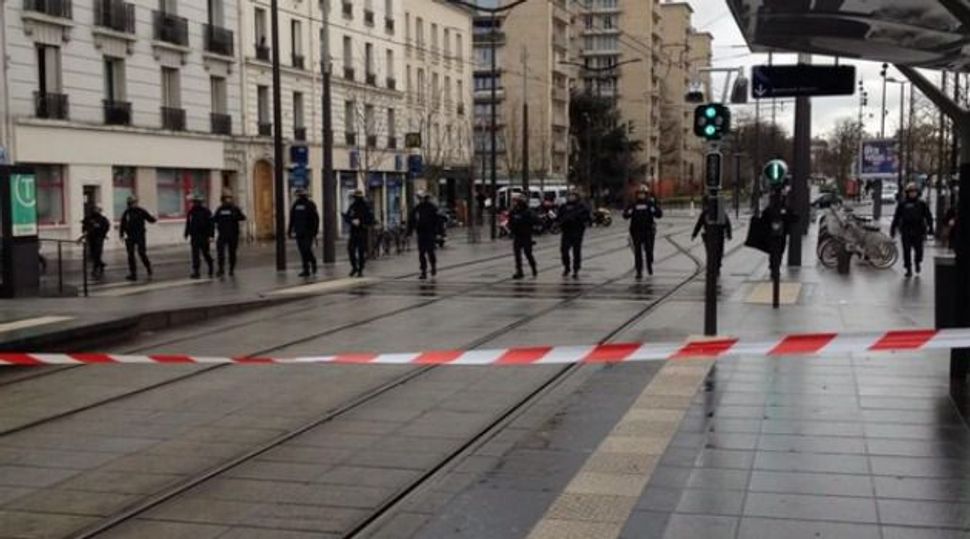 Police arrive on the scene of the hostage crisis in eastern Paris.// Laurent-David Samama

It was mid-morning when I saw several police cars rushing into my street with their sirens on. Even glimpsed through my window, the situation looked unusual.

In light of the recent massacre at Charlie Hebdo, I was suspicious, and headed out in the direction of the noice: Porte de Vincennes, in the southeast of Paris, near the Place de la Nation — and only a few blocks from my house.

Even on foot, I arrived at the scene of the hostage-taking before most journalists.

On the road there were and still are dozens of police cars. Within a few minutes, fire department trucks rushed to Porte de Vincennes later joined by dozens of ambulances. Police stopped traffic. The metro, bus and tram were shut down.

I suddenly realized that today is Friday — Shabbat. It’s no coincidence that the hostages are being held in a kosher market. HyperCasher is a small supermarket located in the eastern part of Paris, close to the cities of Vincennes and Saint-Mande home to strong Jewish communities. Only a few meters away from HyperCasher, there are two other Jewish businesses.

I asked a policeman for official news. He told me that there is still “a wounded in the shop, shot in the forearm.”. Around me more members of the community gathered. They told me that their wives and girlfriends work in the kosher shops nearby. The distress in their eyes was visible …

At 5 p.m. Paris time, all was very quiet. Then, the police told me to evacuate. Journalists still located near the hostage taking area have heard 4 explosions and more than 50 guns shot. We do not know more on the ground. At the moment I’m writing these words, I’m heading towards the nearest hospital, located just a blocks away from the place de la Nation.

We’ll keep updating this post as more information comes in.