What Israel’s Ultra-Orthodox Can Learn from Boro Park 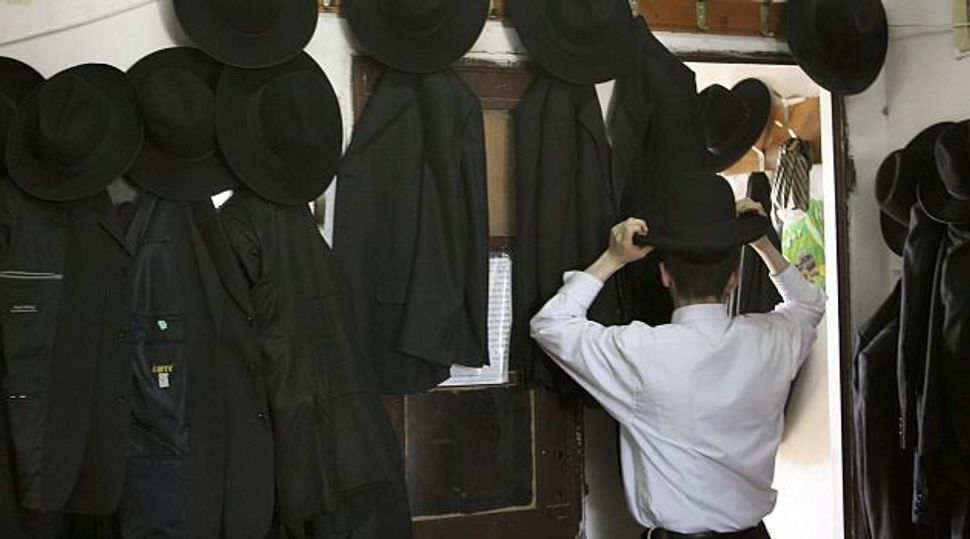 Making a Living: A yeshiva student puts on a black hat in Bnei Brak. Unlike their cousins in the U.S., few Israeli ultra-Orthodox work, resulting in a crushing poverty rate of 66%. Image by Getty Images

On a sudden whim one day recently, I changed my usual jogging route in Hayarkon Park. Instead of running alongside the stream or encircling the national soccer stadium, I turned south, heading toward Rabbi Akiva Street, the main road of Bnei Brak, the impoverished Haredi neighborhood on the eastern outskirts of Tel Aviv.

Since I left Jerusalem 10 years ago, most of my personal and professional connections with the ultra-Orthodox community had actually disappeared (around one-third of Jerusalem’s inhabitants are Haredi, and Tel Aviv is known for being extremely secular), but here, suddenly, in front of my eyes, Sholem Aleichem’s shtetl had been brought back to life.

Imagine 13th Avenue in Brooklyn’s Boro Park during the conventional Jewish hustle and bustle of the Sabbath’s eve. Rabbi Akiva Street in Bnei Brak is an exact duplicate. Almost the same length (both roads are around 1 mile long), the same pedestrian view of dense, crowded stores, small businesses and kosher food establishments, and the same people: huge crowds of bearded men in traditional black garb and broad hats scarcely passing by fleets of strollers, which are pushed forward by fully covered women, each one surrounded by two or three kids, while above constantly hover the sounds of Yiddish.

The visible similarities between Boro Park and Bnei Brak are obvious, but one difference in the daily activities of both groups of pious people is striking: their employment. In Boro Park, though poverty is growing — 43% of Hasidic households in New York were poor in 2012 — many men do run a business or work for a salary. They earn their living. In Bnei Brak, however, an overwhelming majority of men devote their entire life to studying Torah. For their family’s meager income they depend mainly on Israel’s public purse and marginally on Jewish American donors.

And the consequences are distressing: Half the 64,000 children in Haredi Bnei Brak live under the poverty line. This number was published December 16 by Israel’s National Insurance Institute in its annual report on poverty.

One day later, December 17, another poverty report was published, this time by the Taub Center for Social Policy Research. It pointed out two Israeli groups that are extremely weakened economically: the Arab sector, which comprises around 20% of the entire population, and the Haredi community, which makes up about 10%. During 2013, the report reveals, poverty in the Arab sector decreased by some 7 percentage points, to 47.4% from 54.4% in 2012. This was attributed primarily to an increase in employment among women. In contrast, the poverty rate among the ultra-Orthodox increased to 66% in 2013, from 60% in 2012. The report attributes the deterioration to “a lack of increase in employment, low earnings, and the government cutback in child allotments.”

In effect, it is the productive secular and Modern Orthodox sectors of Israeli society that carry the economic existence of the Haredim on their backs. In the 1980s, when the Haredim made up 4% to 5% of the population, this was an undesirable situation, but the secular Israelis tended to ignore it because the extra burden was relatively light. Today, as the Haredim’s obedience to the commandment “Be fruitful and multiply” reaches a historic peak, with seven children per family on average, and since their size in the population has doubled, the secular citizens are complaining that the burden is insufferable.

For their part, the heads of the ultra-Orthodox community are fighting against any attempt at integration into the wider society. Since Israel was founded, the ultra-Orthodox leaders have been convinced that in the long term, the secular Zionist vision has no chance of succeeding. The Zionist state would be a transient episode, the rabbis told their followers, and they promised that in the coming generations the children of the atheistic pioneers, those arrogant Zionists in Tel Aviv, would seek their roots and find their way back to authentic Jewishness.

At least in my own family, several Haredi relatives voiced that opinion over and over again, and as a youth I used to respond with a dismissive smile. It is still too early to say who will be proved right — that’s a matter for a separate discussion — but certainly the numbers are frightening: If the current rate of growth continues, by 2030 Haredim will comprise 15% of the population and by 2050 an estimated 30%. Can one conceive of a state in which almost a third of all males refuse to acquire a trade and go to work?

Surprisingly, however, although the economic burden on the Israeli middle class is heavier today than ever, the ultra-Orthodox sector still has its own archaic school system, in which the core subjects of the secular curriculum, such as English and most sciences and humanities, are not taught. At the same time, around 120,000 yeshiva students are being granted living allowances by the state.

While crossing from north to south through the entire saintly neighborhood of Bnei Brak — it took me almost 10 minutes — and as hundreds of astonished eyes followed my swift excursion, I recalled a story that was published by the Forward a few months ago about Naftuli Moster, a yeshiva graduate from Boro Park who fights for secular studies in Hasidic education. Moster founded an advocacy group, Young Advocates for Fair Education, that seeks to improve secular studies in New York’s ultra-Orthodox day schools. Upon leaving behind Bnei Brak’s piousness, I was wondering why some American Haredi educators insist on following their Israeli peers, when really they should be looking to Moster’s example. It’s people like him who will alleviate the problem of scant opportunities and high poverty in this community, one that can no longer fully provide for itself and its growing families.

Michael Karpin is an Israeli journalist and the author of, most recently, “Imperfect Compromise: A New Consensus Among Israelis and Palestinians” (Potomac Books, 2013).

What Israel’s Ultra-Orthodox Can Learn from Boro Park