What’s Behind Mystery ‘Suicide’ of Argentina Prosecutor in Terror Probe? 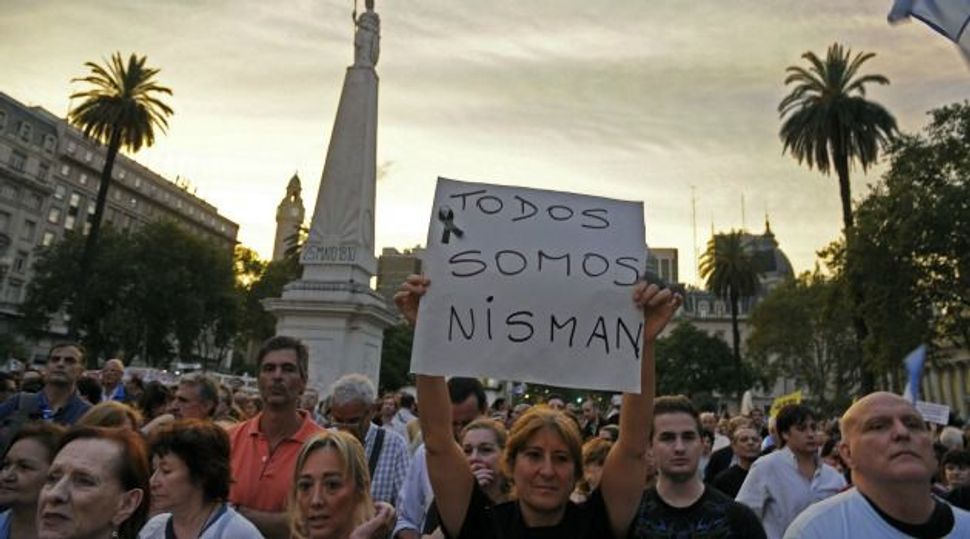 We Are Nisman: Thousands protest the mysterious death of prosecutor Alberto Nisman in Argentina, just hours before he was expected to give explosive testimony about his probe into the 1994 AMIA terror attack. Image by getty images

It’s undoubtedly just coincidence. Then again, once you enter the shadowy world of international skullduggery, few things are coincidence and nothing is what it seems. So let’s just look at the known facts in these two simultaneously unfolding stories and see if we can’t spot any points of intersection. It’s probably all just coincidence.

Consider first the mysterious death on January 18 of Argentinian federal prosecutor Alberto Nisman. For the last decade he headed the investigation into the deadly 1994 bombing of the AMIA center, headquarters of the country’s main Jewish organizations. With 85 dead and nearly 300 wounded, it was the worst attack in modern Argentine history and the deadliest anti-Jewish attack since World War II.

Investigators long ago pinned the AMIA bombing on operatives of the Lebanese Hezbollah militia and its patrons, Iranian intelligence and the Quds Force of the Iranian Revolutionary Guard Corps. But after two decades of botched investigations and alleged cover-ups, nobody has yet been brought to justice.

Four days before his death, Nisman announced that he had hard evidence implicating Argentina’s president Cristina Kirchner and foreign minister Hector Timerman in a cover-up. He claimed they offered the Iranians immunity in return for oil. A day later Nisman said he might end up dead because of his allegations. He was scheduled to appear before a closed session of Argentina’s Congress January 19 to explain his explosive claims.

His body was found the night before in a pool of blood on his bathroom floor, with a .22 caliber pistol nearby and a single bullet wound to the head. Argentine police officials said the death appeared to be a suicide.

Now consider the only slightly less mysterious deaths earlier that same day, January 18, of a dozen Hezbollah and Iranian Revolutionary Guard operatives on the Syrian-controlled side of the Golan Heights. They were bombed in their jeeps by what most observers say was an Israeli helicopter gunship.

The highest-ranking victim in the Golan attack was an Iranian general, Ali Mohammad Allah-Dadi. He was reportedly second-in-command of the Quds Force, the foreign operations division of the Revolutionary Guard. He’d been posted to Syria as senior adviser to the Assad government forces in the civil war.

The most prominent victim of the raid, though, was a Hezbollah operative, Jihad Mughniyeh, 25, the baby-faced commander of the Shi’ite militia’s forces along the Syrian-Israeli frontier. A rising star in the Hezbollah apparatus, he was best known as the son of Imad Mughniyeh, the assassinated Hezbollah security chief held responsible for a string of deadly terrorist attacks — including the AMIA bombing in Argentina.

Israel hasn’t publicly commented on the Golan helicopter raid, but security sources have been quoted saying Jihad Mughniyeh was planning “deadly attacks” on Israeli civilians. Retired Israeli General Yoav Galant, a loose cannon who’s now running for Knesset with former Likudnik Moshe Kahlon, said on television that the raid’s timing, so close to the election, was suspicious. The comment drew fierce criticism from both government and opposition Labor sources.

Both Iran and Hezbollah vowed revenge for the deaths. Was Nisman’s death the result? Journalist Yossi Melman, one of Israel’s top intelligence experts, hints that it might have been.

Mughniyeh’s father Imad was assassinated by a car bomb in Damascus in 2008, either by Israel’s Mossad or — as alleged by his widow and some prominent Lebanese politicians — by a rival faction in Syria. At the time he was considered the second-most wanted terrorist in the world after Osama bin Laden.

Terror attacks attributed to Imad Mughniyeh include the 1983 Beirut bombings of the U.S. embassy, killing 63 people, and the U.S. Marine barracks, killing 241, as well as the hijacking of TWA Flight 847, in which U.S. Navy diver Robert Stethem was tortured and killed. Mughniyeh was also credited with numerous kidnap-murders in Lebanon, most notoriously the kidnapping, prolonged torture and murder in 1985 of CIA Beirut station chief William Buckley. Buckley’s gruesome fate is said to have prompted the Reagan administration to launch its arms-for-hostages deal with Iran, which evolved into the Iran-contra affair.

In March 1992, according to Israeli, U.S. and Argentine authorities, Mughniyeh planned and led the bombing of the Israeli embassy in Buenos Aires, killing 29. Israeli intelligence officials believe that attack was in retaliation for the assassination in February by Israeli helicopter gunships of Hezbollah secretary-general Abbas Musawi, along with his wife and toddler son.

Not long afterward, Iranian agents impressed by Mughniyeh’s operation began scouting for another Argentine target. Iran was looking for a way to punish Argentina for its recent decision, under U.S. pressure, to halt nuclear cooperation with Iran. They settled on AMIA.

In August 1993, a group of top Iranian leaders was convened in the city of Mashhad (MOSH-hod) by then-president Hashemi Rafsanjani to approve the AMIA bombing. Also present at the meeting were Iran’s supreme leader, Ayatollah Ali Khamenei, as well as foreign minister Ali Akbar Velayati and intelligence minister Ali Fallahian.

Command of the attack was assigned jointly to the intelligence ministry and the Quds Force, with Mughniyeh to head the operation itself. The following July 1, Mughniyeh arrived in Buenos Aires with a small Hezbollah team and connected with the Iranians. The bombing took place July 18.

Those details were first disclosed to German intelligence in 1996 by a ranking Iranian defector, Abolghassem Mesbahi. Over the next four years he met several times with Argentinian investigators. A warrant for Mughniyeh’s arrest was issued in 1999. But the investigation went around in circles. Among other things, Mesbahi claimed that Argentina’s then-president Carlos Menem had been paid $10 million by Iran to thwart the investigation. And a detailed 2009 report on the bombing by an Iranian human-rights group claims that Menem had his own reasons for hindering the probe: a son of Syrian immigrants, he had close ties to some shady Syrian business figures that he feared would come out.

The chief AMIA investigating magistrate, Juan Jose Galeano, told the Forward’s Marc Perelman in 2003 that he didn’t trust Mesbahi as a source. He was also feuding with the Argentine intelligence agency SIDE, which was conducting its own investigation. A few months after that, though, Galeano himself was removed from the investigation, impeached and disbarred after it was learned he’d paid a witness $400,000 to implicate Argentinian police in the bombing.

Nisman was named to replace Galeano in 2005 by President Nestor Kirchner, who declared that the mishandling of the AMIA case was a “national disgrace.” In 2006 arrest warrants were issued for the implicated Iranian leaders. Nisman even got Interpol in 2007 to circulate the warrants internationally.

But then things stalled again. Kirchner was succeeded in 2007 by his wife, Cristina Fernandez de Kirchner. According to numerous reports, she began dialing down the investigation. In 2010 she appointed Timerman, a prominent human rights activist then serving as Argentinian ambassador in Washington — and son of the late, renowned Argentinian-Israeli human rights activist Jacobo Timerman — as foreign minister.

In 2013, Kirchner and Timerman negotiated an agreement with Iran to set up a joint “truth commission” that would put the AMIA case to rest by establishing the facts. The commission plan fell through, but Nisman claimed he had proof from wiretaps that the pair were in fact planning to dismiss the charges in return for commercial deals with Tehran. He was said to have been particularly incensed at wiretapped conversations in the president’s office in which he personally was referred to as “that dirty Jew.”

Which raises another mystery: Why would Timerman have taken part in such a sordid scheme with apparently open anti-Semites? What is his real relationship with Kirchner — and with his father’s legacy?

And, of course, the greatest mystery of all: Who killed Alberto Nisman? Was it suicide? More dirty dealing from the heirs of the notorious Argentinian Peronist movement? Yet another Iran-Hezbollah attack against a Jewish target in Argentina? And if it was the latter, was it — like the earlier ones — retaliation for a poorly thought-out Israeli assassination? And finally, will we ever get to the bottom of it all?

What’s Behind Mystery ‘Suicide’ of Argentina Prosecutor in Terror Probe?