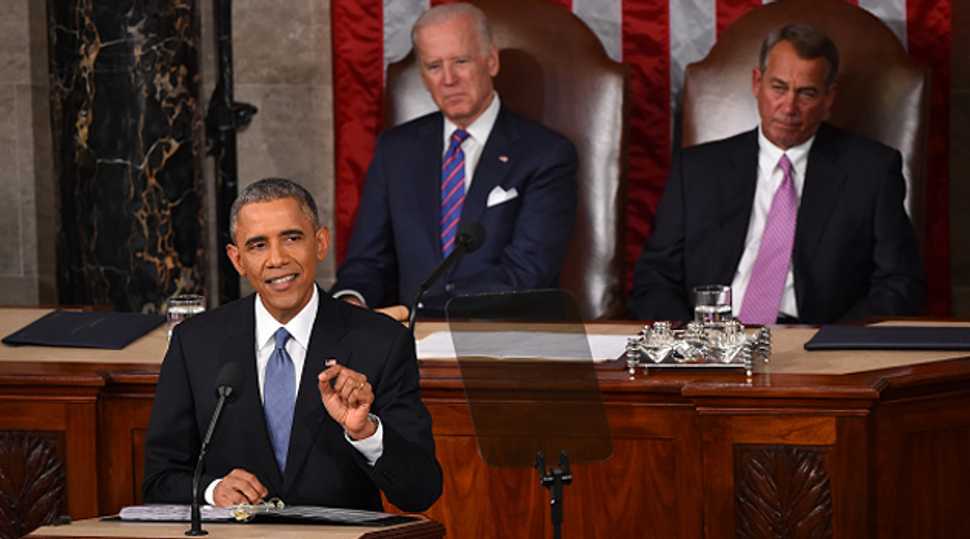 Yesterday’s State of the Union address was a success for Obama. From ending the war in Afghanistan and helping to revive the economy, the president touted his accomplishments. The same accomplishments his fellow party members were reluctant to use to their advantage in the last elections.

So many stood up and applauded as he mentioned the most controversial topics and spoke frankly about them. Global warming — it’s real. Women — they’re not second-class citizens. Racism and discrimination — not in our home. Biden was beaming behind him like a guardian angel and John Boehner looked like his face was about to melt off in a giant frown.

There were a lot of good things for Jews to fist-pump over in last night’s address. Overwhelmingly, we care about women, care about the environment and care about education. But here are four things that made it especially good for us:

Even France was reluctant to say the recent attacks targeted Jews. And in a world where some are reluctant to use the “A” word, Obama said it loud and clear: “As Americans, we respect human dignity, even when we’re threatened… It’s why we speak out against the deplorable anti-Semitism that has resurfaced in certain parts of the world.”

2) Israel is our ally

Obama did not mention the Israel-Palestine conflict, despite the recent Gaza War. This may be a good thing for those of us who are especially critical of Obama in relation to Israel. He did give Israel a shout-out when he spoke about Iran. “Between now and this spring, we have a chance to negotiate a comprehensive agreement that prevents a nuclear-armed Iran; secures America and our allies — including Israel; while avoiding yet another Middle East conflict.”

Alan Gross was the First Lady’s Guest of Honor at the State of the Union and he got a special heartfelt mention from the president: “After years in prison, we’re overjoyed that Alan Gross is back where he belongs. Welcome home, Alan.” Gross looked elated, waving back from the crowd.

4) A woman’s right to choose

Tomorrow is the 42nd anniversary of Roe vs. Wade. While abortion rights are still in danger, Obama made sure not to shy away from all women’s rights, especially the right to choose: “We still may not agree on a woman’s right to choose, but surely we can agree it’s a good thing that teen pregnancies and abortions are nearing all-time lows, and that every woman should have access to the health care she needs.”

Whether or not we agree with Obama’s politics, we can say he delivered a confident and impassioned speech. He spoke “takhles” — openly and to the point. Which, when you think of it, is a pretty Jewish thing to do.