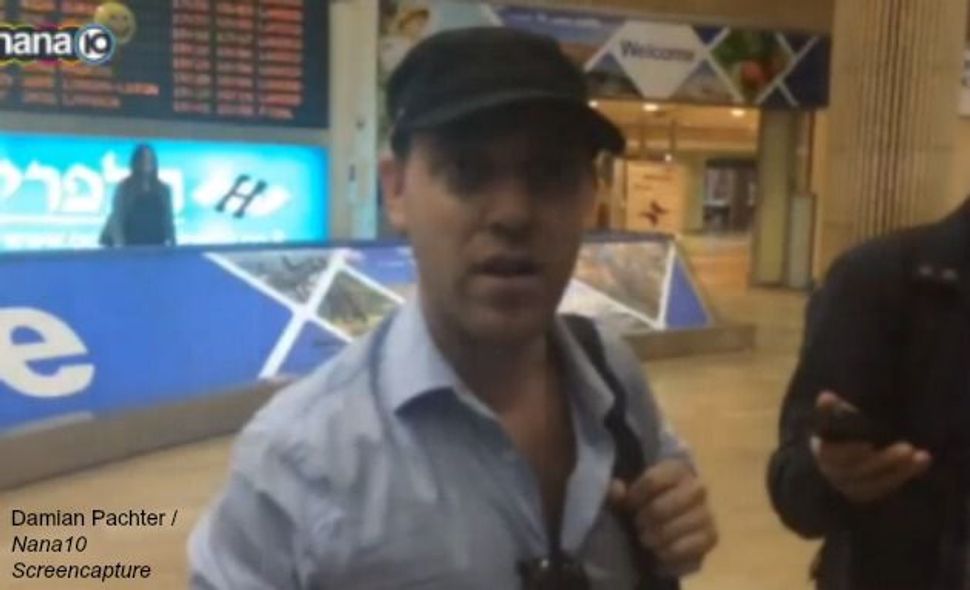 Damian Pachter, the Argentinian journalist who broke the news of the death a week ago of special prosecutor Alberto Nisman, has landed in Israel after fleeing for his life on Saturday.

In an impromptu press conference (video here) at Ben-Gurion Airport Sunday morning, Pachter affirmed in fluent Hebrew that he was being followed and believed his life was in danger because of his reporting on the Nisman case. Asked in English why he fled to Israel, he replied: “I came here because I’m an Israeli citizen, I lived here the most important years of my life and this is the place I feel safe.”

Nisman had spent the last decade investigating the deadly 1994 bombing of the AMIA Center, headquarters of Argentina’s main Jewish organizations. He was found shot to death in his apartment last Sunday, hours before he was to testify to Congress on his allegations that Argentina’s president was plotting with Iranian officials to cover up their alleged role in the bombing.

Investigations have pointed to Iran’s top leaders as the planners of the bombing, which killed 85 people and was the worst terrorist incident in Argentine history. It was allegedly executed by the Hezbollah, the Lebanese Shi’ite militia largely controlled by Iran’s Revolutionary Guard Corps.

Authorities initially described Nisman’s death as a suicide. Then, as doubts mounted, the office of President Cristina Fernandez de Kirchner put out statements claiming that Nisman had been used by disgruntled Argentine ex-intelligence agents to libel the president and was murdered after he was no longer useful.

In an uncanny apparent coincidence, Nisman’s death was discovered about 19 hours after the death, apparently by Israeli drone strike, of Hezbollah operative Jihad Mughniyeh, whose late father Imad Mughniyeh is believed to have led the 1994 bombing operation. A ranking Iranian Revolutionary Guard general was killed with him.

The senior Mughniyeh, head of Hezbollah’s military-terrorist operations, was assassinated by car bomb in Damascus in 2008.

If Nisman was killed in mid-afternoon Argentina time, as investigators suspect, it would have come about eight hours after the raid that killed the younger Mughniyeh. This has led to speculation by at least one knowledgeable Israeli intelligence expert of a possible link, perhaps in a last-minute revenge move by a sleeper cell that had already scoped out Nisman’s apartment for possible assassination.

However, most speculation on the Nisman killing focuses on Argentine intelligence, as Haaretz reported on Thursday.

Pachter described his novel-like flight from Buenos Aires today. You can read his first-hand account here.