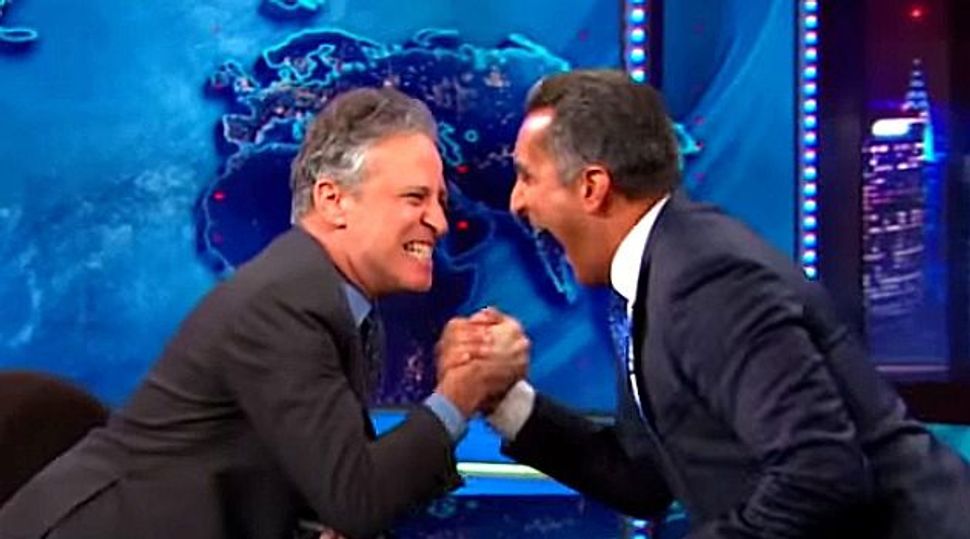 Jon Stewart and Bassem Youssef on “The Daily Show” / Youtube

If you want to know why, just watch this clip of the real Jon Stewart joking around with “Egypt’s Jon Stewart,” Bassem Youssef. It aired shortly before Jon announced his decision to leave the show, and it revolves around a simple question: What can America do to fix the Middle East?

Bassem’s answer is simple, too: “How about — nothing!”

Jon plays devil’s advocate, arguing, “If the people choose the wrong government, we’ll help them get it right. Some boots on the ground, some advisers.” Which, of course, sets Bassem up to explain just what’s wrong with America’s interventionist foreign policy.

But then Bassem takes it one step further — by laughing at himself, at his own argument, at his own people. He provides that dash of self-deprecation without which comedy fails to be, you know, comedic (Israel’s totally unfunny “Hakol Shafit” is a good example of this).

“We want you to f—k off and leave us alone,” Bassem says. “But not right away. We could still use the aid money, and a few weapons, and some investments… What I’m saying is, if you could f—k gradually off, that would be better for everybody.”

This is Middle East comedy at its best: an unflinching look at the catch-22s and double standards that plague both — no, all — sides.

And who’s been providing the mechanism for this comedy for over 15 years? Jon, of course. He’s been providing it not only in the U.S., but also in places like Egypt, where he inspired Bassem to start his own wildly popular satire show that began as a Middle Eastern riff on “The Daily Show.”

Every week, Bassem took to TV to wittily eviscerate the top leaders of the Arab world, and endear himself hugely to the Arab public (40 million viewers!). But then Sisi came to power in Egypt — and, sadly, the dissenters went the way of the Pharaohs.

In many ways, it was Jon Stewart who modeled this dissent.

He’s fought funnily and vociferously against the idea that “questioning in any way the effectiveness or humanity of Israel’s policies” automatically makes you an anti-Israel self-hating Jew:

And he’s memorably pointed out some of the absurdities of the special relationship between the U.S. and Israel (“We cannot be Israel’s rehab sponsor and its drug dealer!”):

But ultimately, his greatest achievement may have been giving others the comedic tools to do the same sort of thing wherever they might find themselves.

With Jon gone, it will soon be up to others to fill his shoes — and they will be big, big shoes to fill. Yet if there’s anything comforting in Jon’s departure, it’s the knowledge that he’s already set others up to do just that.