How Bibi’s Speech Raises Stakes for All of Us 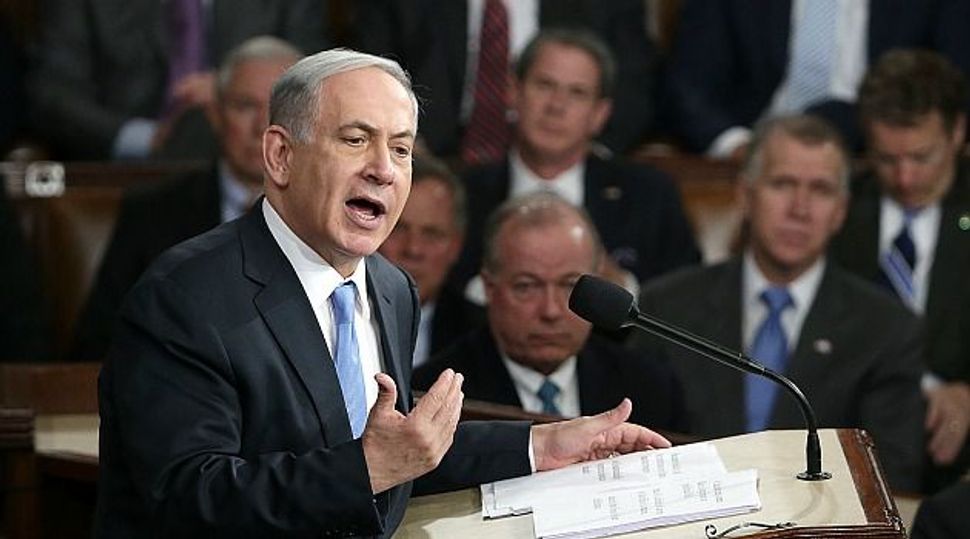 It was great political theater; one observer likened it to a Republican response to the State of the Union address, but on a grander scale (and with more anticipatory hype). Netanyahu’s apocalyptic language likely resonated for many Israelis and certainly spoke to hundreds of Congress members, who leapt to their feet dozens of times at the prime minister’s clever (and prop-free) mixture of stark facts, exhortations and schmaltz.

In so baldly and boldly challenging President Obama, Netanyahu raised the stakes for the administration, which now owes the American public a point-by-point rebuttal. But the Israeli prime minister also raised the stakes for himself by offering no long-term alternative, no superior path to disarmament.

Employing his considerable rhetorical skills to take command of the room, the prime minister described Iran in terms designed to frighten and excite, painting a picture of a nation hell bent on exporting its vicious brand of revolutionary terror and “gobbling up” nations all around its volatile region.

And he did a masterful job of critiquing what he characterized as the current terms of an agreement being negotiated by the United States, France, Germany, Russia, China and the United Kingdom, a deal that he claimed would “all but guarantee” that Iran would, eventually, become an atomic power with evil intentions.

Indeed, the “sunset” provision that’s apparently part of this deal — allowing the restrictions on Iran’s nuclear capability to expire in about a decade — is worrying, especially if the decade-long break persuades some of its rivals to go nuclear during that time period, too. And Iran’s known propensity to cheat throws cold water on the promise to maintain an appropriate nuclear infrastructure without turning it into a secret bomb-making machine.

In laying out this case to a mostly-appreciative audience, Netanyahu may well have accomplished what his Congressional patron, Republican House Speaker John Boehner, intended: To make it difficult, if not impossible, for lawmakers to approve the deal so ardently sought by Obama. Netanyahu may well also have accomplished his main political motive on this trip to Washington: To secure his own reelection, by delivering a stirring speech laced with Jewish themes and a touch of Hebrew, beamed to prime-time Israel just weeks before it goes to the polls.

His insistence that his appearance wasn’t political, his avowed love and respect for the Obama administration — all rang hollow. Netanyahu came to the U.S. capitol to challenge this Democratic president and boost his electoral chances at home. No question about it. And he may well have succeeded.

But at a cost. This high stakes gamble also entails its own risks to the prime minister, the nation he wishes to continue lead, and to what has been his most important political, financial and strategic ally, the U.S.

By so blatantly challenging the Obama administration on its home turf, Netanyahu has further exacerbated the increasing partisanship of foreign policy in general, and of Israel advocacy in particular. Once the glow of umpteen standing ovations has faded — never did we expect to see members of Congress applauding Purim! — the speech laid bare a growing political schism that no 45 minutes of fine words will erase.

And he made this all about Israel, reinforcing the idea that stopping Iran is really about saving Jews. In his litany of Iran’s transgressions — they are many and they are real — Netanyahu did show how the Islamic regime oppresses at home and makes deadly mischief abroad. But by framing this contest as a replay of the Purim story read in synagogues this evening, where a hateful public figure is thwarted in his attempt to kill all the Jews, Netanyahu probably connected with Israelis, and some Jews, and evangelical Christians.

But he didn’t talk to a broader America weary of yet another Middle East war and skeptical of military intervention in that messy region. He didn’t show Britain, France, Germany, Russia and China why a better deal, or a military option, is better for them. They are the ones at the negotiating table; not Israel.

That is what has been so baffling about Netanyahu’s approach to Iran all along, laid bare in his speech to Congress. If he’s correct that a nuclear Iran is the greatest existential threat to Israel and the region — some of his own military and security experts dispute that, but let’s put that aside for the moment — then why alienate the very powers that could stop it? Why alienate the White House and European leaders instead of courting them as allies? It’s a strange sort of diplomacy, this lecturing and berating.

It could be worth the risk if Netanyahu had a more convincing alternative. Instead of “this very bad deal,” the prime minister argued for continued, strangling sanctions until Iran stopped aggressively trying to control neighboring states, stopped supporting terrorism and stopped threatening Israel. Who wouldn’t want that?

But will more sanctions and more threats achieve those lofty goals? Or will they make Iran more desperate? And if Iran balks and walks away, how then is the West supposed to suppress and monitor its nuclear activities?

At the end of his speech, Netanyahu made a stirring declaration that Israel will stand for itself, no matter what. While he carefully avoided using the term “war,” that’s what he implied — a unilateral military action, even though many experts say that an Israeli strike will do little to stop Iran’s activities and could unleash the very regional violence that he says he is trying to avoid.

Netanyahu threw down the gauntlet with characteristic chutzpah. He laid out a compelling reason to fear Iran and a valid critique of the current negotiations. But his preferred path of stricter sanctions to bring about a tougher deal or the real prospect of military action suffers from the same flaw that he attributes to Obama’s approach.

Both men are predicating their policies on a change in Iranian behavior. Obama clearly believes that by subjecting Iran to a global inspections regime, the Islamic nation will be incentivized to move away from its destructive past. Netanyahu thinks that’s foolhardy.

Instead, though, he is counting on a vague policy of strangling sanctions and restrictions to persuade Iran’s rulers to relinquish what Israel won’t acknowledge it has: nuclear autonomy. Why is that any more realistic? Given what will be lost if these talks collapse, is that not an even bigger gamble?

How Bibi’s Speech Raises Stakes for All of Us