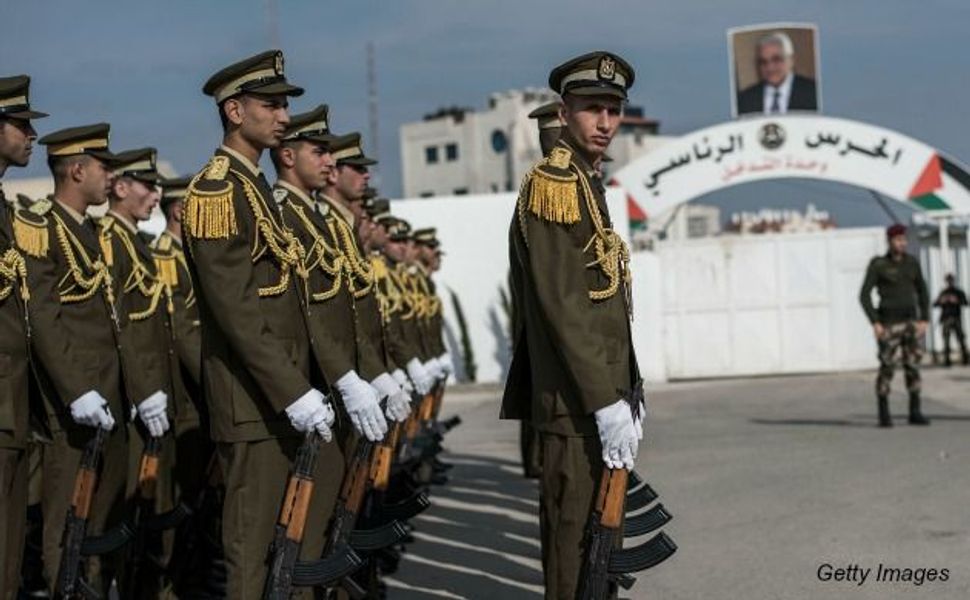 This looks like another one of those cases where the press gets out ahead of the story. The initial headlines (here, here) said the Palestinians have cut security coordination between their forces and Israel’s. The stories under the headlines said that actually the PLO’s central council had either ordered or recommended that the Palestinian Authority (which is not the same thing as the PLO) halt security coordination at some future point to be decided by Mahmoud Abbas.

The reality seems to be that Abbas, who chairs both bodies, has just given himself another cudgel to hold over Israel’s head, part of a growing collection, like the International Criminal Court and other UN agencies, that he brandishes but never really uses as he tries to pressure Israel. His goal is to press Israeli to accept his terms for Palestinian independence without reigniting the violence that’s brought such misery on the Palestinians in the past. Don’t ask how its working out for him.

Coordination between Israeli and Palestinian security forces was one of the terms of the 1993 Oslo Accords between Israel and the Palestine Liberation Organization, which agreed jointly to create the Palestinian Authority as a semi-autonomous administrative body in the territories while Israel and the PLO continued to negotiate a permanent arrangement.

Under PLO-PA chairman Yasser Arafat the coordination was, shall we say, spotty, going up and down and falling apart completely when the Second Intifada broke out in 2000. Things got better in 2003 when Abbas, then Arafat’s deputy, was appointed PA prime minister. Terror attacks dropped dramatically and the PA security forces stopped participating in them. Things got better still after Arafat died in November 2004 and was replaced as chairman by Abbas.

The real turning point came in 2007. That’s when the United States set up a training program under Lieutenant General Keith Dayton to professionalize the PA forces. Things turned around rather quickly as more and more units went through the American training bases in Jordan and returned to the field.

Since then terrorism against Israelis has become a relative rarity, at least in Middle Eastern terms. The rise of the security barrier is partly responsible, but much of the credit goes to Israeli-Palestinian cooperation.

Attacks that do occur are generally primitive, improvised lone-wolf attacks with knives or vehicles, not connected to organized terror groups and hence largely impossible to detect in advance. On occasion Hamas and other radical groups manage to organize a cell, but they’re usually broken up either by Israeli or Palestinian forces. It’s been reported that PA treatment of Hamas operatives in the West Bank is a major contributor to the PA-Hamas tension that’s mounted continuously since 2007.

The catch is that, as with most political activity, the Palestinians’ security operations are driven not by altruism but by self-interest. They do it to get something for it. But they’re not getting it. They interdict terrorists in order to show that they can be trusted to be good neighbors and to manage their own state. Israel under Netanyahu shortsightedly accepts their help in stopping terrorism and then continues to slam them as a bunch of terrorists who can’t be trusted.

It’s a game that can’t go on forever. General Dayton himself emphasized in a speech in May 2009, two years into the training program, before the Washington Institute for Near East Policy, the pro-Israel think tank founded and mainly funded by AIPAC supporters. In Dayton’s words, that the Palestinian troops he was training “believe that their mission is to build a Palestinian state.” Responding to a question afterward, in a comment reported by a blogger who was present and widely quoted since then, “There is perhaps a two-year shelf life on being told that you’re creating a state, when you’re not.”

That was six years ago. Dayton’s warning was widely interpreted at the time as a threat that if the Palestinians didn’t get their way they’d turn their guns on Israelis. Not only hasn’t that happened — the coordination has gone on for years after Dayton believed it would run out. PA forces helped round up Hamas suspects in the search for the kidnapped teenagers last June. They kept the peace in the West Bank during the summer war in Gaza. Now that things are reaching a crisis, the threat is not to stage a rebellion but simply to stay home.

Both Israeli and American security authorities speak highly of the Palestinian troops’ efforts. The most frequent complaint against the Palestinian forces is that they don’t adhere to Western human-rights standards (not that Western security forces are so fastidious). Curiously, many of the complaints of human rights violations by Palestinian security come from the Israeli right. Unable to impugn the Palestinians’ performance in interdicting terrorism, the right is reduced to complaining that they’re too zealous, apparently hoping they can be discredited in the eyes of Western liberals.

One of the oddest aspects of the debate over Palestinian security is the insistence frequently heard on the right that the decline in terrorism is entirely due to Israeli efforts and that the Palestinians can’t be trusted, regardless of what Israeli security forces say in the Palestinians’ favor. The argument, in effect, is that Israelis shouldn’t trust the IDF’s judgment — only the IDF can be trusted to protect Israelis. Got it?