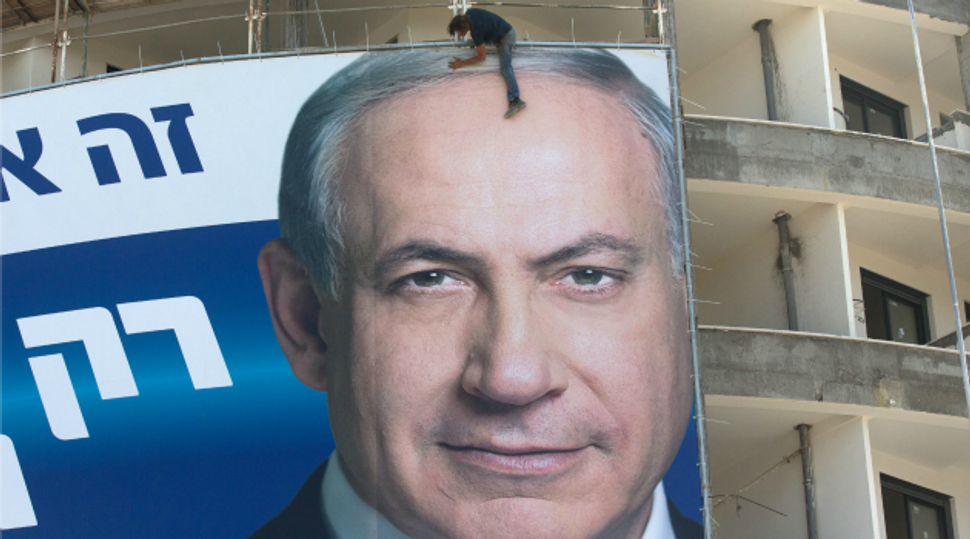 Benjamin Netanyahu and his Likud party were backpedaling furiously this weekend to dispel an unwelcome image of diplomatic flexibility, after a negotiating document surfaced in which the Israeli prime minister appeared to offer sweeping concessions to the Palestinians on 1967 borders, return of refugees, Palestinian presence in the Jordan Valley and some undefined Palestinian claim in Jerusalem.

Netanyahu and the Likud issued a series of statements variously calling the purported document either a fake or a genuine American draft that Netanyahu’s adviser had helped to draft, even though the prime minister flatly rejected its contents. In a final effort to distance himself from the concessions, he announced on Sunday that he no longer endorsed Palestinian statehood.

While Netanyahu was trying to distance himself from that document, however, Israel’s Channel 10 Television on Sunday evening reported on yet another document offering similarly sweeping concessions in Netanyahu’s name. This second document was a letter reportedly given to Quartet negotiator Tony Blair by Netanyahu’s then-adviser Ron Dermer, currently Israeli ambassador in Washington, expressing willingness to accept the “consensus of the international community” and withdraw from all the territories Israel captured in 1967, with some land swaps. Channel 10 investigative reporter Raviv Drucker reported the Dermer letter but gave no indication of its date. (Dermer has denied offering any withdrawals.)

Forgotten amid the furor, meanwhile, is the July 2014 New Republic account of the failed Kerry peace talks, by reporters Amir Tibon and Ben Birnbaum. In January 2014, they reported, the secretary of state got a written agreement from Netanyahu that the “new secure and recognized border between Israel and Palestine will be negotiated based on the 1967 lines with mutual agreed swaps.”

In all, then, there are now reports of three separate documents in which Netanyahu or his close aides appear to accept the creation of a Palestinian state along the pre-1967 armistice lines or their equivalent in area. This would seem to weaken the claims from the left that Netanyahu is incapable of making the concessions needed to reach peace with the Palestinians. Coming just over a week before Israel’s parliamentary elections, though, they pose far greater danger to Netanyahu, whose campaign for reelection is based on his image as an uncompromising opponent of Israeli concessions.

The weekend furor began with front-page report by political commentator Nahum Barnea in Friday’s Yediot Ahronot (English version here). It described a document dated August 2013, purportedly summing up a series of negotiations in London between a close adviser to Netanyahu and a confidante of Palestinian leader Mahmoud Abbas.

The document, reportedly titled “Draft Proposal for Statement of Principles toward a Permanent Arrangement,” is a veritable catalogue of positions Netanyahu has vehemently rejected at other times: a Palestinian state with borders based on the pre-1967 armistice lines, with some areas swapped on a “mile for mile” basis; Israeli acceptance of an unspecified number of Palestinian refugees returning to Israel “on an individual basis”; Palestinian control of parts of the Jordan River valley; and a “solution” to the fate of Jerusalem that addresses both peoples’ “historical, cultural, social and effectual ties” to the city.

Netanyahu responded angrily to the publication, apparently fearing it would hurt him with his right-wing voter base. On Friday morning the Likud issued a statement calling it “political blather by Noni Mozes,” referring to Yediot publisher Arnon Mozes, whom Netanyahu frequently accuses of fabricating negative stories about him. Next it was dismissed as an American document whose terms Netanyahu had never accepted, though it had admittedly been drafted by Netanyahu’s adviser, attorney Yitzhak Molcho, together with Abbas’s confidante, Oxford professor Hussein Agha.

The two advisers were described as working on a document that could then be presented by Washington to the two sides as a framework and starting point for negotiations, but not a position paper that either side was endorsing.

On Friday afternoon, economics minister Naftali Bennett of the settler-backed Jewish Home party took to his Facebook page to describe the Molcho-Agha document as genuine. Bennett called the document a reminder of the pressures for dangerous territorial concessions that Israel will face over the next two years, and an indication of the importance of a strong Jewish Home presence in the Knesset to prevent the “disaster” of Israeli withdrawal and Palestinian statehood.

On Saturday, a statement appeared in a so-called Sabbath pamphlet distributed en masse in synagogues claiming that the prime minister had “announced that the Bar-Ilan speech is null and void.” The reference was to Netanyahu’s pivotal June 2009 speech at Bar-Ilan University voicing support for a Palestinian state alongside Israel. The pamphlet in turn was disavowed on Sunday in a statement from Likud headquarters, claiming that the pamphlet text had been written by Likud lawmaker Tzipi Hotovely without authorization from the prime minister.

Finally, on Sunday afternoon, following a series of contradictory versions from Likud headquarters, Netanyahu himself told a press briefing that the Bar-Ilan speech is indeed “no longer relevant, in light of the current reality in the Middle East.”

Netanyahu’s attempts to disavow the Molcho-Agha document got a hand on Sunday from veteran American negotiator Dennis Ross, who is described as the mediator in the Molcho-Agha talks. In an interview with Sheldon Adelson’s daily Israeli newspaper Yisrael Hayom, Ross said that he had asked Molcho and Agha, “two longtime friends of mine,” to join him in brainstorming “a U.S. proposal for a framework.” According to Ross,

The idea was that both sides would agree to negotiate using the U.S. proposal, while making clear that they had reservations about provisions that ran counter to their positions.

Adding further confusion, Ross also seemed to suggest that while the discussions produced many draft proposals, there was no draft produced in August 2013.

Over the years of our discussions, we came up with many drafts both before and after August 2013 but there was not an August 2013 draft. In any event, to my regret the exercise did not succeed.

If the Ross-Molcho-Agha talks continued after August 2013, though, then they overlapped with the formal negotiations Israeli-Palestinian negotiations begun in July 2013 by Secretary of State John Kerry, with Molcho and Tzipi Livni representing the Israeli side.