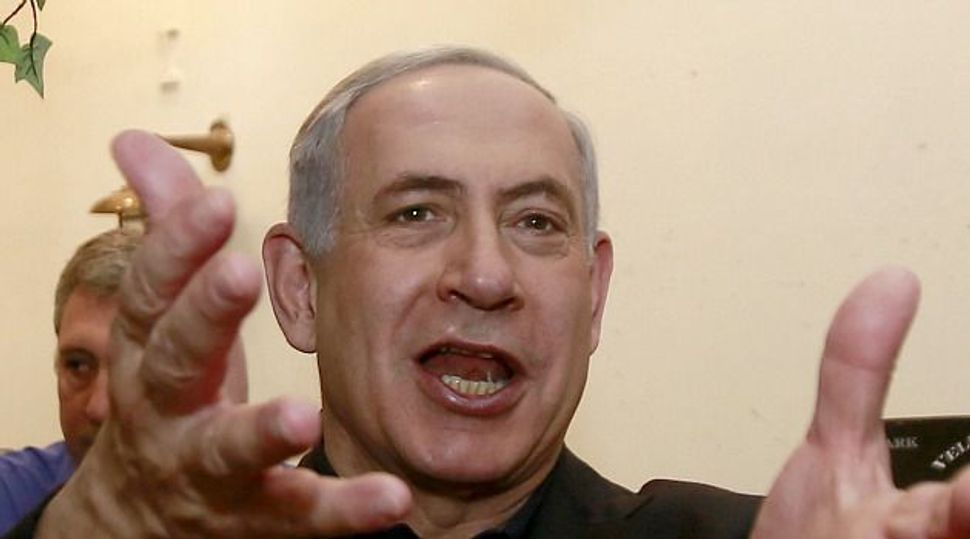 Rabbi Daniel Gordis, a popular, American-born voice of Israel’s center-right, writes in Bloomberg View that Prime Minister Benjamin Netanyahu’s reelection campaign, deemed a sure thing just days ago, has run into a “perfect storm” from which it may not recover.

“It has been a steep and precipitous fall since those glory moments on the podium before the U.S. Congress,” Gordis wrote. “Netanyahu is clearly in trouble.”

In-depth polling conducted internally in recent days by the Likud as well as its Labor-led “Zionist Camp” opposition shows the same thing. Likud’s own poll analysts are predicting as few as 18 seats in the 120-member Knesset. Zionist Camp internal polling shows it leading Likud 27-21.

Gordis cites three major crises that have suddenly hammered the campaign in the last few days. One is a series of slashing attacks on Netanyahu’s leadership by the widely admired former Mossad director Meir Dagan, culminating in an emotional speech by Dagan before a massive anti-Netanyahu rally Saturday night in Tel Aviv.

Second is a hotly protested Likud television commercial that was released March 4 and quickly withdrawn the next day, but not before causing enormous damage. The ad depicted a mock therapy group of public nuisances hurt by Netanyahu’s policies, including civil servants no longer able to ignore the public and a Hamas terrorist unable to carry out attacks. Airport and port workers, traditionally Likud voters, complained that the ad likened them to Hamas terrorists and vowed not to vote for the party. Gordis notes that while Netanyahu apologized for the ad, his close ally, Defense Minister Moshe Yaalon, claimed Netanyahu hadn’t known about the ad — despite the fact that the prime minister appeared on camera to deliver the closing pitch on the same set where the therapy group was meeting. (Watch the ad here.)

The third crisis is the publication last Friday of a leaked document apparently indicating that Netanyahu had secretly agreed to peace negotiations based on the 1967 lines, along with a return of some refugees and a Palestinian foothold in Jerusalem and the Jordan Valley, all positions the prime minister has repeatedly rejected in public. Compounding the damage caused by the document itself among Likud supporters on the right was the inept, panicky response of Netanyahu’s campaign, which first called the document fake, then denied he had agreed to the positions in the document, then claimed he now repudiated his endorsement of the two-state solution in his famous 2009 Bar-Ilan University speech. Finally, late Sunday night, he repudiated the repudiation of two states.

“Whatever the outcome,” Gordis writes,

this election will almost certainly prove much closer than Netanyahu ever imagined it would be. Calling these elections seems to have been a major political blunder.

Gordis, 55, is a New York-born Conservative rabbi who moved to Israel in 1998 after serving as founding dean of the Los Angeles-based Conservative seminary, the Ziegler School of Rabbinic Studies. Originally known for his liberal views, he gained widespread popularity during the Second Intifada for a series of hawkish essays about life in Israel amid terror attacks. He’s since been identified politically with the right, making his warning about Netanyahu’s reelection all the more pointed.

Gordis isn’t the only one raising storm warnings over the Netanyahu campaign. According to news reports, internal polls conducted by both the Likud and its opposition, the Labor-led Zionist Camp, show the Likud trailing the challenger far more dramatically than any of the published polls have shown.

Internal polls are more expensive and go into greater depth than the standard daily polls sponsored by media outlets.

A March 1 report in Haaretz (Hebrew, paywall) quoted unnamed Likud campaign sources who said their polling indicated that widespread apathy among Likud voters would depress turnout. They calculated that the Likud was on track to end up with as few as 18 seats in the 120-member Knesset.

Most campaign punditry has focused on the fact that with Netanyahu and Herzog running neck-and-neck in the polls, Netanyahu would have an easier time than Herzog wooing the smaller centrist parties into a coalition. Herzog’s sole hope of forming a government was said to be the unlikely prospect that he would end up with a significant lead over Netanyahu, allowing him to conduct tough negotiations with the centrists while Netanyahu was left watching from the sidelines. With a week remaining before the vote, that prospect is looking at least a bit less unlikely.