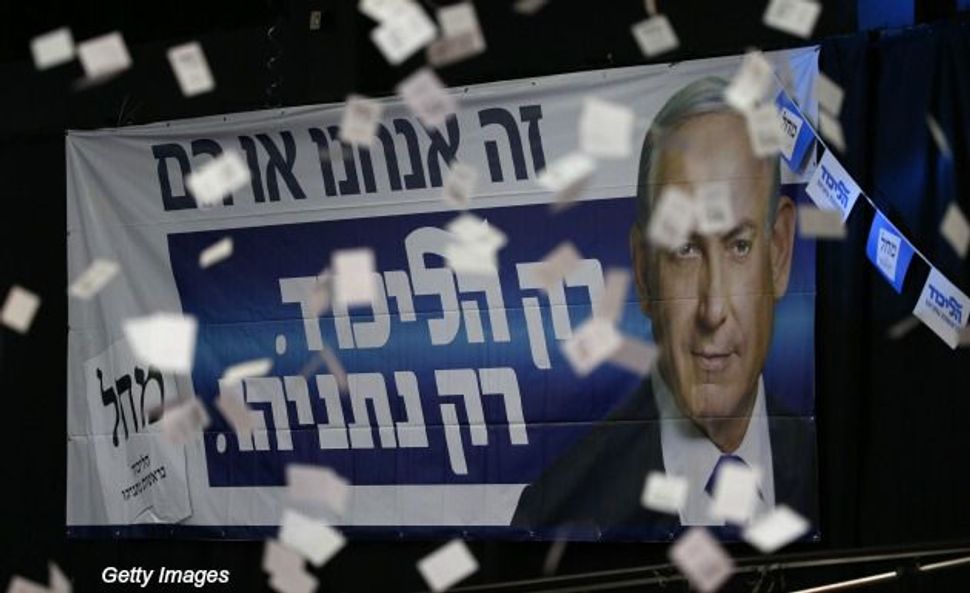 In the end it wasn’t even close. Pre-election polls had Benjamin Netanyahu’s Likud trailing the Zionist Union of Yitzhak Herzog and Tzipi Livni by four Knesset seats, nearly 4% of the popular vote. Analysts around the world were falling over each other to write Bibi’s political obituary. Then came election day. Exit polls found he’d amazingly closed the gap. With the two parties effectively tied, Netanyahu suddenly appeared far better positioned than Herzog to form the next coalition.

When the actual vote-count ended, it was a Netanyahu landslide. He’d left his challenger gasping in the dust, winning 30 Knesset seats to Herzog’s 24. He’s now poised to shape Israel’s next government more or less as he chooses. The only question, it seems, is whether he’ll choose a narrow coalition of the right or a broad unity government with Herzog.

So it seems. In fact, though, his situation is devilishly complicated. En route to his come-from-behind victory he left a trail of bad blood that will haunt him for months. His last-minute outcry to save Israel from the votes of its Arab citizens arguably won him the election. But it opened a deep rift in society that will take a long time to heal. He presides over a society wounded by his own hand.

The immediate damage of Netanyahu’s the-Arabs-are-coming slur mustn’t be underestimated. It infuriated Israel’s Jewish liberals and moderates along with non-Jewish minorities. It reverberated worldwide, evoking shock and revulsion even among Israel’s admirers. It will deepen rifts within the American Jewish community. It will be cited endlessly by Israel’s enemies as evidence in their ongoing campaign to demonize and isolate Israel as a racist, apartheid state. Worst of all, this is one bit of evidence they won’t be making up.

Nor was the slur an isolated incident. It came just a day after Netanyahu’s cynical declaration that he won’t allow a Palestinian state as long as he’s prime minister. Put together, the two bombshell statements make him look more than ever like a far-right extremist. They’ll increase tensions with Western capitals at a time when healing is badly needed.

Netanyahu’s proxies will argue in the coming days that he didn’t really mean what he said about Israeli Arabs and Palestinian statehood. It was just electioneering, they’ll whisper, meant to woo voters away from the smaller parties to his right and bulk up his own party’s showing. The excuse may smooth things over on the surface. But the slurs will linger. They’ll reinforce the suspicions Western leaders already harbor about him. Leaders will offer forced smiles and congratulations on his reelection in the Middle East’s only democracy. But they won’t forget how he got there, nor what his race-baiting says about the state of Israeli democracy.

Moreover, fence-mending will carry risks. The harder he tries to dial back his far-right outbursts, the more he’ll anger allies he’ll need in his new government. There’s already considerable resentment over his poaching of his allies’ voters. Jewish Home, his main ally, was particularly devastated, dropping from a projected 11 Knesset seats to eight in a matter of hours Tuesday as its voters rushed to save his incumbency. As he tries to assemble a new coalition, never an easy task, those wounds will need healing. Unfortunately, the more he tries to fix things with the West, the more he’ll offend his partners at home.

Many well-wishers, beginning with Israel’s own president, expect Netanyahu to attempt a unity government with Herzog in order to restore international credibility. He’s already promised to do no such thing. His heady victory may make him feel he doesn’t need to bother trying.

If he does reach out to Herzog, it won’t be an easy sell. Herzog heads a Labor Party that came back from the brink of oblivion to a respectable size this year. He revived its fighting spirit after a decade languishing as a shrunken ghost, reduced to serving as a fig leaf for a series of rightist governments while its loyalists left in disgust for more principled harbors.

Herzog himself might dearly want to sign on as foreign minister to help protect Israel’s image — and to protect himself from the primary challenge that awaits failed Labor leaders. But it won’t be easy getting it past his caucus. They’ll balk at cooperating with Netanyahu after his rightward lurch on Israeli-Arab rights and Palestinian statehood. They’ll remind him that he was a leader of Labor’s 2011 rebellion, when the party quit an earlier Netanyahu government over the objections of then-party leader Ehud Barak. Barak had refused to give up his perch as Netanyahu’s defense minister. His stubbornness ended his political career. There’s a limit to expediency.

The victor’s challenges aside, the election carries an important lesson for Israel’s center-left. Its leaders decided this year’s election wasn’t about peace, security or the Palestinians. They ran on bread-and-butter issues. Netanyahu campaigned on his security record. And he won big. As he himself argued, the cost of living pales compared to protection of life itself. All it took to boost his vote skyward was an election-day alarm about an Arab threat. For all the center-left’s efforts to change the subject, the election came down to security and Israeli-Arab relations.

The irony is that Netanyahu’s record on security is a resounding failure. For all his rhetoric, Iran’s nuclear project has raced forward on his watch. His six years have seen three wars, all ending inconclusively. Hamas is unbowed. West Bank terrorism has spiked after a seven-year hiatus as the peace process has stalled and Palestinian frustration has grown. Now he risks losing security coordination with the Palestinian Authority.

Amid all this, Netanyahu’s relations with his own security apparatus have reached an unprecedented low. He ignores his own intelligence, to the point where he tried to prevent the head of the Mossad from meeting with visiting senators in January, for fear he’d tell them what Israel really knows about the Iran threat. The country’s defenders in turn are afraid of his recklessness.

Netanyahu’s apologists are trying in the last few days to claim Israelis are united on these issues. That’s nonsense.

The bottom line: The center-left opposition had a stronger argument on security and peace than Netanyahu did, but it was afraid to make its case. Despite the unprecedented outpouring of anti-Netanyahu protest from retired defense and intelligence chiefs — including nearly every former head of the Mossad and Shin Bet and one-third of all living ex-generals — Herzog and his allies steered clear of them.

In effect, they told voters, don’t look to us to protect you from the threats that surround Israel. And Israelis listened.