We’re All Letting Bibi Off the Hook for Racism 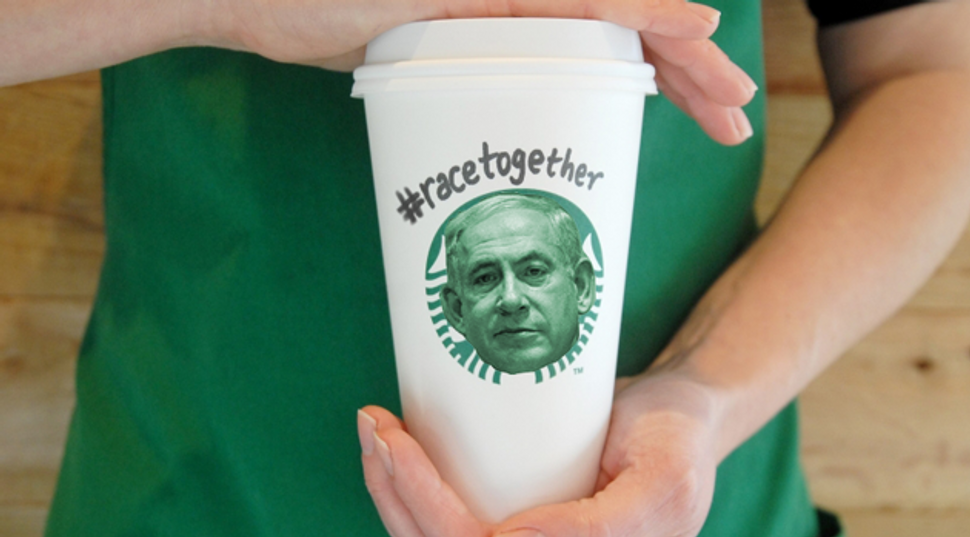 Benjamin Netanyahu confirmed everyone’s worst fears about him when he launched a last-minute fear campaign on Tuesday, warning that “Arab voters are coming out in droves to the polls” — and proving that he is perfectly happy to win an election using racism.

Depressingly, predictably, Bibi’s “the-Arabs-are-coming” bugaboo worked like a dream on the Israeli public, shoring up his base by swinging the right-wing vote toward him. But how will it play in America?

The answer is: very, very bad.

Or at least it should be.

Israel has a stunningly high tolerance for racist slurs — whether voiced by a Jewish politician or by an irate soccer fan — and the country generally allows its people to get away with the sorts of comments that would never, ever fly in the U.S. Here, racism has a very different valence. The issue of race is such a hot, “on-trend” issue in America — especially in a post-Ferguson era — that Starbucks is now trying to capitalize on it by encouraging baristas to scrawl #RaceTogether on coffee cups, with the (dubious) aim of getting customers to have a friendly chat about race relations at eight in the morning.

In this climate, you might expect that Bibi’s fear campaign would be enough to repulse not only American liberals (Jewish and non-), but even the more centrist card-carrying Bibi-boosters. And you’d be right — but only to an extent.

In Washington, the State Department issued a careful criticism: “We’re always concerned, broadly speaking, about any statements that may be aimed at marginalizing certain communities,” spokeswoman Jen Psaki said. The New York Times editorial board was much more vocal, publishing a swift and forceful condemnation of the Israeli prime minister’s “racist rant.”

John Podhoretz was one. The Commentary editor-in-chief’s remarks on Twitter made it clear that he didn’t think Bibi’s campaign was anything to get riled up about.

Worse, the president of the World Jewish Congress, Ronald Lauder, heartily congratulated Bibi on his victory, praising his “tremendous leadership abilities” and his potential to “make the world a safer place for all people.” Not a peep about how Bibi’s penchant for attacking minorities might make some people feel quite a bit less safe.

Worst of all, the Anti-Defamation League — a group whose entire, self-declared raison d’être is to “counteract hatred, prejudice and bigotry” — likewise congratulated Bibi on his “strong showing” in the election, without bothering to condemn the means he used to secure it. The closest the ADL got to calling him out was this timid little whisper low down in their press release:

Regretfully, this campaign was too often marked by extreme and divisive statements by candidates. We urge leaders of all parties to work to reach out to all segments of Israel’s society and heal these wounds.

But it wasn’t all the “candidates,” or all the “leaders of all parties,” who used anti-Arab fear-mongering to win the election. It was Bibi, and everybody knows it. So why not mention him by name?

The hypocrisy that the ADL is showing and has long shown in its treatment of major Israeli leaders is embarrassing, as Larry Derfner has written before. And it’s time we called them out on it.

We’re All Letting Bibi Off the Hook for Racism