We Might Have Lost — But We Were Right About Bibi 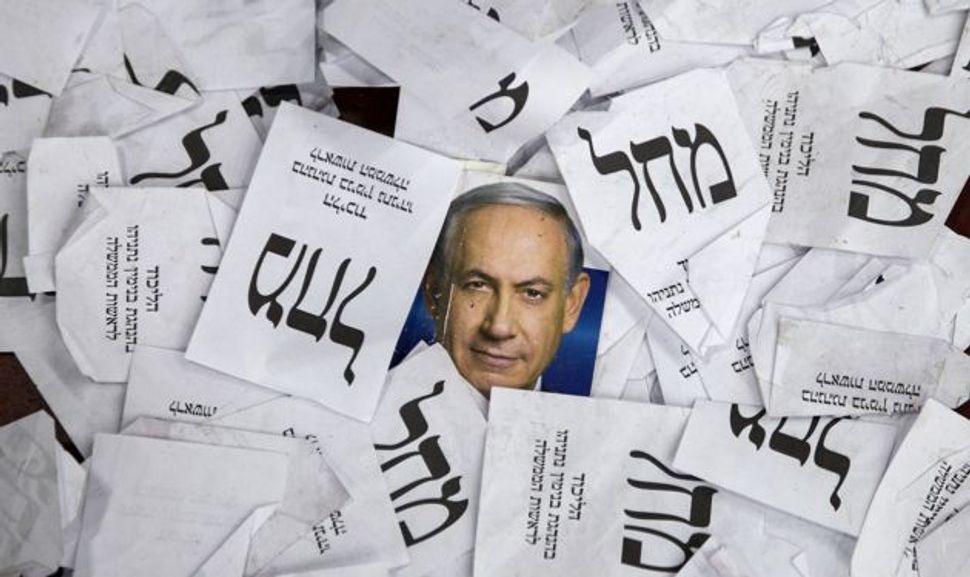 Bibi’s Win: All his cards were left on the table. Image by Getty Images

Obviously, the Israeli election was a disaster for Jews everywhere who favor making peace with the Palestinians. But as much as we lost, and lost badly, we should also learn to say three words.

We were right when we said that Har Homa, the East Jerusalem neighborhood, was built there to block a Palestinian state.

We were right when we said that settlements were bleeding Israel’s economy dry, far more than official statistics let on, while the Jewish state shredded its social safety net.

We were right when we said that Benjamin Netanyahu never really wanted a two-state solution.

We were right when we said that he and his allies do not regard Arab citizens as equal, and play on Israeli fear, racism, and hatred.

We were right when we said that the right is made not of hawks, but of ostriches, their heads in the sand, ignoring demographic and political realities, and running counter to Israel’s own intelligence services — all in the name of extreme nationalism.

For all these assertions, we and our allies in Israel were pilloried by the Supposed Jewish Mainstream , or SJM as I’ll refer to them, that numerical minority of the Jewish community represented by the flag-waving nationalists at the American Israel Public Affairs Committee, the boards of most federations and the donor lists of many (most?) synagogues. They said we were naive, stupid, anti-Israel, anti-Jewish.

But in the waning hours of the 2015 election, Prime Minister Netanyahu expressly validated all but one of these assertions — with disclosures from the World Zionist Organization confirming the other assertion about the economics of settlement growth.

Of course, as with everything Netanyahu says, it’s best not to believe him too much. Just as his Iran speech was intended, as Paul Krugman aptly put it, to wag the dog away from economic issues and toward security ones, so, too, his barrage of far-right statements was aimed more at gaining votes for his party than at anything else. By opposing a Palestinian state, denying the citizenship of Arab Israelis and bragging about settlements, Netanyahu made it easier for voters for the far-right Jewish Home to choose his party instead.

But he still said all those things, and they cannot be unsaid.

This changes the American Jewish reality.

First, the SJM can no longer pretend that it is supporting peace by supporting Revisionist Zionism, a movement that was co-founded by Netanyahu’s father and that for 75 years has consistently rejected peace with Arabs and insists on Jewish dominance by force. We were right, SJM: Your guy is a liar. His strategy, other than to win elections, is exactly what we have said it is: consolidate Greater Israel, settle in for a long occupation, shift the focus elsewhere and fight endless skirmishes, like last summer’s adventure in Gaza.

So, SJM — and my friends who claim to be pro-peace but still go to AIPAC conferences — you now have to choose. It’s one or the other. Either you support a revisionist regime that is racist and rejectionist (and re-elected with enormous influxes of Adelson cash), or you support the Zionist dream of Herzl and Ben-Gurion. It’s time to choose.

And to my friends in the pro-peace camp, it’s time to take off the gloves. Or, if you prefer an androcentric metaphor, it’s time to man up and grow a pair.

Conveniently, J Street’s conference comes just a few days after the election, in Washington, D.C. To them, I say, enough of the policy of coexistence with the SJM, AIPAC and nationalistic partisans. You can’t coexist unilaterally, after all, and the SJM has never returned the favor. [It won’t let you into its undemocratic, self-congratulatory, money-wasting “Presidents Council.” It won’t let Hillel’s president enter the Walter E. Washington Convention Center when you’re there. They think you’re treyf.

Make it clear: You reject Revisionist Zionism, and those who support it have spent too long in the Disney-like Israel of Taglit-Birthright Israel and not enough time in international geopolitical reality.

Make it clear: You want the Obama administration to pressure Israel.

And make it clear that Revisionist Zionism is morally and politically wrong. Sure, it feels good to wave Israeli flags and reflect on the Zionist miracle. Nationalism, patriotism and ethnocentrism often feel good. They express a basic human desire to be part of a group.

But that doesn’t make it right, or smart, to do so. Wave too many flags and you’re going to hit each other in the head — which is what the SJM has done.

In the name of catering to a base that is part racist, part deluded, part terrified and part messianic, revisionists are creating a pariah state. Like their American friends in the Tea Party, they are deluded by patriotism. Their hearts have gotten the better of their minds.

We were right about the right’s intentions; Netanyahu has proved that.

And we are right that his Israel will become a pariah state. Alas, time will prove that too.

We Might Have Lost — But We Were Right About Bibi