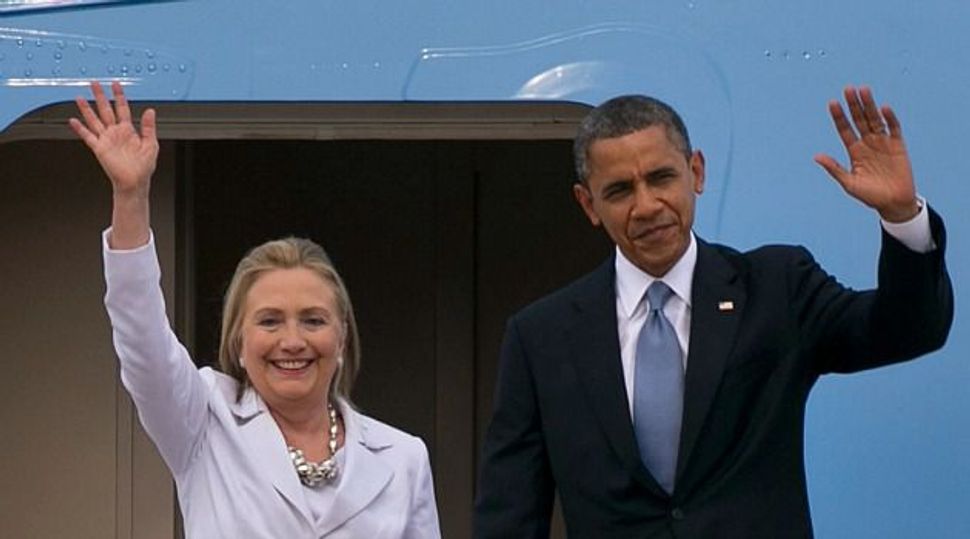 In what could be a warning signal for Hillary Clinton, President Obama’s approval advantage among American Jews dipped during the first quarter of 2015 to its lowest point since he took office in 2009, according to a Gallup poll published today.

Obama’s approval rating among Jews averaged 54% over the first three months of the year. That’s a modest rise from the 52% average during the second half of 2014. Among Americans overall, though, the president rose sharply to 46% in the first quarter of 2015 from an average of 42% during the second half of 2014. As a result, the gap between Jewish opinion and overall American opinion — his Jewish advantage, so to speak — has narrowed to just 8%, the lowest in his presidency. It’s averaged 13% until now.

Gallup doesn’t give a reason for the narrowing of the advantage. It notes, however, that “news media attention” has been focused in recent months on “a possible weakening of U.S. Jewish support for Obama.” It notes that Iran nuclear negotiations have increased U.S.-Israeli tensions, and “may have offended some American Jews who see their president as siding more with Iran than with Israel.”

The biggest unanswered question is how much this reflects mistrust of Obama and how much it indicates a broader shift among Jews away from the Democrats. Republicans have been trying energetically since at least 1968 to move Jews from the Democratic to the Republican column, and while they’ve claimed victory whenever a presidential election has seen a noticeable change from the one before — recall the hoopla when George W. Bush managed to win a higher Jewish percentage in 2004 than in 2000 — it’s never lasted very long.

The new Gallup poll shows in stark terms that support for Obama — which presumably reflects liberal political leanings — decreases steadily as religious observance increases. Jews who attend synagogue weekly report a 34% approval rate and 60% disapproval. Among those who attend nearly weekly or monthly, approval and disapproval are 53% and 44% respectively. For those who attend seldom or never, the figures are 58% and 38%.

Jewish political opinion matters in three main ways. First, there’s the question of donors. Democrats traditionally have benefited most from Jewish donors, and the importance of Jewish donors to the Democrats has increased in the past generation as the importance of money in politics has grown, for the simple reason that Jews traditionally are the one significant group that doesn’t become significantly more conservative as they grow wealthier.

But that’s changing in several ways. As The New York Times reported April 4, the conflict between Obama and Netanyahu has helped sharpened the partisan American debate over Israel. Big donors — including but not limted to Sheldon Adelson — have helped move the Republicans closer to Israel, and the Republican differentiation from Democrats over Israel in turn has brought more Jewish donors to the Republicans. And don’t underestimate the anger among wealthy Jews, particularly on Wall Street, over Dodd-Frank and current liberal rhetoric over inequality and the One Percent.

The other two ways Jewish political views matter are in activists — James Carville once estimated to me that Jews can constitute as many as one-third of the volunteers and staffers in Democratic presidential campaigns — and in close votes in the seven to nine states where Jews make up a significant proportion of the population. The tendency of Jews to vote Democratic in greater numbers frequently has produced enough of a margin to shift the popular vote in recent presidential races in states as diverse as Missouri, Georgia and even North Carolina. The numbers aren’t huge, but they’re critical in close races, and just about every race seems to be close these days.

All this puts Hillary in a tight spot. She can’t lose the Democratic base, which is increasingly liberal and, as a March 31 Pew survey showed, increasingly skeptical about Israel. On the other hand, she can’t openly alienate the Jewish political community. However hard Obama tries to repair his rift with the hardcore pro-Netanyahu wing, it’s probably a lost cause. And Bibi won’t be inclined to help. A growing shift to the right among American Jews can only please him.