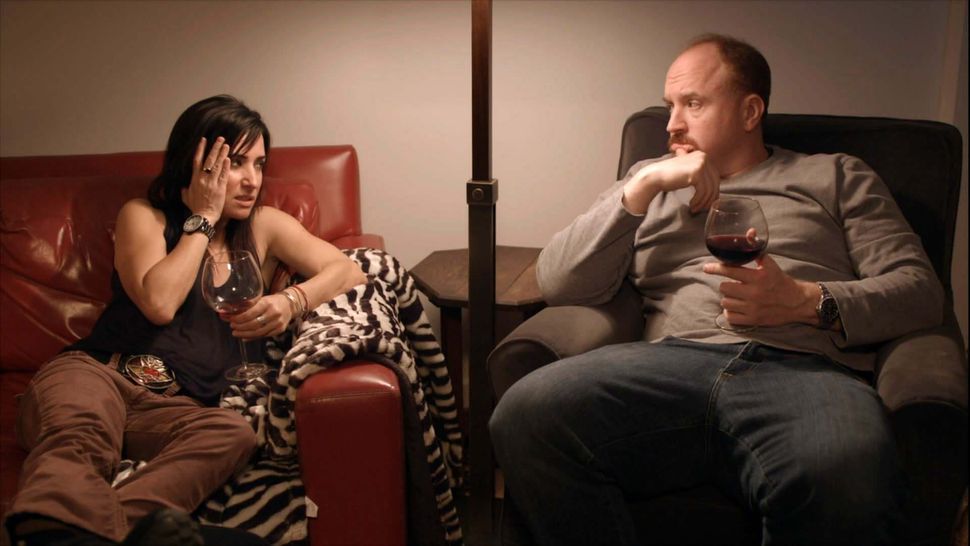 Image by Courtesy of FX

The brassy Jewish woman — let’s call her the BJW — has long been a standard character on both stage and screen. Going all the way back to the likes of Molly Picon, the BJW has been played by such comic greats as Joan Rivers, Fran Drescher, Susie Essman, Bette Midler, Barbra Streisand and, most recently, Ilana Glazer of “Broad City.” [You can recognize these women by their loud, often foul mouths, their habit of getting straight to the point and, quite often, an unruly set of curls.

I have mixed feelings about the BJW. Part of me cherishes her both for her familiarity (my matrilineal lineage is dotted with many fine examples) and her constitutional resistance to many classic notions of femininity. Demure and subservient she is not.

However, as I’ve grown older and embraced my inner BJW, I’ve begun to feel some resentment about how she is portrayed. Why, in the 21st century, is a woman who speaks her mind still considered unfeminine, or worse, undesirable? At best, the BJW is played for a laugh; at worst, she’s portrayed as a chronic castrator, a symbol of her male partner’s emasculation. What I longed for is a BJW as an object of tender affection.

Louie C.K.’s FX show, “Louie,” is a game-changer for a number of reasons, but my personal favorite is the recurring role of Pamela, who, yes, is a BJW and an object of tender affection.

The innovative sitcom features C.K. playing himself, a woebegone divorced comedian raising two kids alone in New York. Over the past five seasons Louie has had a number of romantic and sexual liaisons (including fellow BJW Gaby Hoffman), but nobody has him feeling feelings like the feisty Pamela, played by C.K.’s real-life producing partner, Pamela Adlon. (Yes, Adlon is Jewish. Lesser-known fact: C.K. is a quarter Jewish.)

Take, for example, the scene from the second season in which Louie confesses his love for Pamela. “Can I tell you, one time, how I feel about you?” he asks. “You wanna tell me?!?” she replies, eyebrows raised, corners of her mouth pinched. As he goes on to tell her how he feels, the show plays it not as a moment of weakness, but as an act of strength. He’s in love with a tough broad and he’s man enough to handle that, even if she doesn’t love him back.

Two seasons later, when they do get together, it isn’t because she finally softened up and turned into a delicate and therefore love-worthy lady. Her brassiness remains, from the time she breaks the Waspy awkward silence in a meeting with his ex-wife — “Is it always like this?” — to the time she blends gentle ribbing and sincerity as she tries to convince an insecure Louie to disrobe and join her in the bath.

PAMELA: What’s wrong? You don’t want to take your shirt off?

LOUIE: Well, I never did yet with you. You’ve never seen me with my shirt off.

PAMELA: Louie, that’s your body. Don’t be ashamed, Papa, you’re a big bear. Come on, off with the shirt. (She then fakes shock when he peels off his shirt.)

When he finally joins her, the result is one of most honest portrayals of the complex relationship between vulnerability and affection that I’ve ever seen.

Now, a big part of what makes Pamela work is that she isn’t a BJW version of the manic pixie dream girl, a stock character whose main purpose in the story is to help the male protagonist find himself. Pamela’s got weaknesses, too. She is scared of intimacy and, in a recent episode, encouraged Louie

He’s in love with a tough broad and he’s man enough to handle that, even if she doesn’t love him back.

to view his relationship with her as “a la carte.” This is important because it makes for a real, and therefore relatable, person; Pamela is also someone in need of finding herself.

It makes sense that a big reason the Pamela character works so well is the input Adlon has in the storyline. In interviews, C.K. has spoken about his heavy reliance on her when writing the show, a relationship that goes way back to his short-lived 2006 HBO show “Lucky Louie,” on which she played his wife.

“Before ‘Lucky Louie’ nobody would ever cast me to play a mom or a wife, nobody ever saw me in that role, which is weird, since that’s who I really am,” Adlon told The New York Times in 2008. “And then Louis called and said, ‘You have to be my Edith Bunker.’”

And, as if her role on “Louie” would not have been enough, Adlon recently signed a deal with the usually male-dominated FX (the network that carries “Louie”), about an actress and single mother raising kids in New York — basically a parallel plot to Louie’s single dad. At last we’ll get to see a BJW in all her splendid complexity, in a story she’ll write for herself.