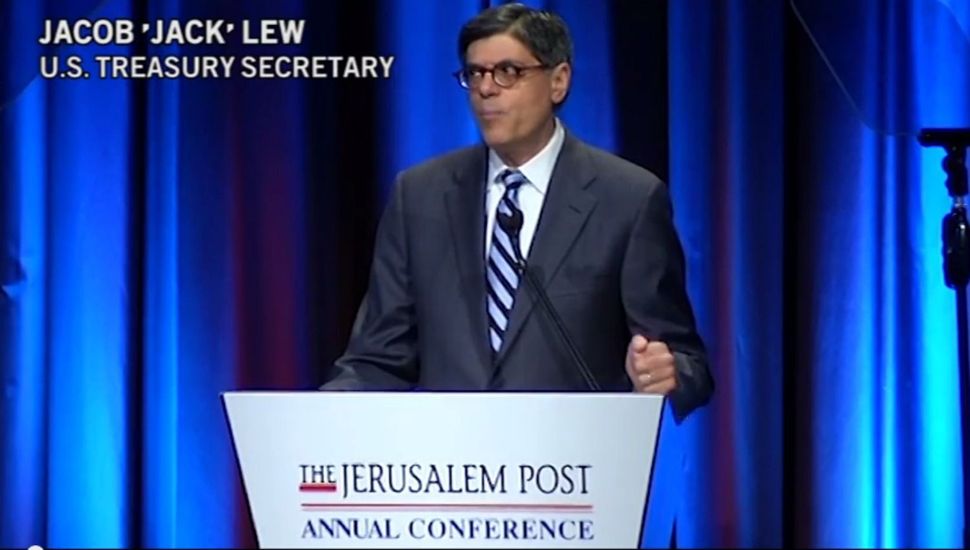 The most surprising thing about the heckling of Treasury Secretary Jack Lew at the Jerusalem Post Conference in New York on Sunday was how much surprise it evoked.

Catcalls and Bronx cheers, mostly directed against the Obama administration but also at Israeli-Palestinian peace talks, have been a distinguishing feature of the annual event since its debut in 2012. The biggest difference this year was the presence on stage of an actual Obama administration official to heckle. And the audience took full advantage of the opportunity.

The conference, held each spring in a ballroom at Manhattan’s Marriott Marquis hotel, is an odd mix of high-level Israeli security seminar and right-wing Zionist pep rally. The speakers’ roster at the day-long event is usually dominated by Israeli cabinet ministers, Jerusalem Post journalists and retired generals and intelligence chiefs, along with a peppering of public figures like superlawyer Alan Dershowitz and Jewish Agency chairman Natan Sharansky. On-stage exchanges range from polite debates to shouting matches and name-calling. The first conference, in 2012, featured former Mossad chief Meir Dagan calling then-environmental affairs minister Gilad Erdan a “liar” and Erdan firing back that Dagan was “sabotaging Israeli security.”

The New York audience, on the other hand, is always heavily salted with the Post’s core readership of aging pro-Israel hardliners, usually about one-third Orthodox and mostly eager to spring to Israel’s defense against any enemies, even when they’re IDF generals. On-stage mentions of Obama consistently get the same response as Haman in a synagogue on Purim. The warmest reception is reserved each year for the Post’s lead columnist, the poison-penned right-wing scourge Caroline Glick, who draws repeated cheers and standing ovations as she delivers her stock attacks on liberals, the media, the two-state solution and President Obama.

The heckling increased as he went into details of the Iran negotiations. He said that Obama’s increase of sanctions had brought Iran to the table, that a New York Times report on Iran violating the interim agreement’s ban on uranium enrichment was wrong, that any final deal would include intense inspection of Iran’s facilities and that a future violation by Iran would bring a “snap-back” of sanctions. Nearly each assertion drew shouts and boos. At one point an audience member shouted, “You’re a court Jew.”

Lew wasn’t the only Democrat to get heckled during the day. Later in the day, Representative Nita Lowey of Westchester, former longtime chair of the House Appropriations foreign operations subcommittee — the body in charge of foreign aid — was heckled when she lamented the “politicization” of U.S.-Israel ties this winter by House Speaker John Boehner, through his invitation to Netanyahu to address Congress without consulting the White House.

The attacks seemed to catch the Post off-guard. The Post ran an effusive editorial the next day titled “Lew, friend of Israel.” And in contrast to news headlines at CNN, Fox News and Haaretz that trumpeted the booing and hostile reception, the Post’s own coverage was more delicately headlined “Lew gives fervent defense of Iran deal to vocal skeptics at JPost Conference.”

Allies of Prime Minister Netanyahu seemed equally rattled, aware of the danger of angering the White House at a moment when Israel is seeking help fighting off foreign boycotts and blocking an upcoming pro-Palestinian United Nations resolution. Speaking right after Lew, Israeli infrastructure minister Yuval Steinitz, a former minister of intelligence and one of Netanyahu’s closest allies, praised the administration’s support for Israel. “Despite the sharp differences, those are differences among friends,” Steinitz told the crowd, “and I want to tell you as a former minister of intelligence that cooperation in intelligence and defense remains very strong.”

Speaking later to reporters at a press briefing, Steinitz went further and said, “I do agree that security cooperation between our security apparatuses and our intelligence is better than ever, and there were important upgradings, especially in intelligence, from President Obama.” He said he “felt embarrassed” at the heckling of Lew, “because Jacob Lew is a true friend of Israel. Without him we could not have made it into the OECD,” the alliance of industrialized nations that admitted Israel last year.

“We need to appreciate our friends,” Steinitz continued, “and to hear the reactions in the audience — it was embarrassing.”

Jewish Agency chairman Natan Sharansky, another longtime Netanyahu ally, was even warmer in his defense of Lew, recalling that years ago, while serving as an aide to House speaker Tip O’Neill, Lew helped advance the cause of Soviet Jews by bringing refuseniks’ families to Capitol Hill to meet with lawmakers and urge U.S. action.

In the end, though, the outbursts were entirely predictable, precisely because they weren’t new. In fact, they’ve been worse in the past. Former Israeli prime minister Ehud Olmert was scarcely audible above the shouting when he spoke at the 2013 conference. Also heckled that year was Dershowitz, one of Israel’s most prominent American defenders, who was booed for urging the audience not to boo at Obama’s name.

The Post has to know by now who makes up the audience at its annual New York conference. In addition to the volatile stew that it cooks up at the Marriott every spring when it unites thoughtful analysts with hot-headed roughnecks, it might want to consider its role in helping to generate that sort of hostility in the first place, through its publication of a constant stream of vitriolic, over-the-top, ad-hominem attacks on Obama, liberals, peace talks and even Israel’s generals in its regular lineup of incendiary hard-right columnists. There’s only so many times that a newspaper can publish accusations of self-hate, treason and anti-Semitism against fellow Jews, Israelis and Israel’s essential allies before the witches’ brew blows up in our collective face.