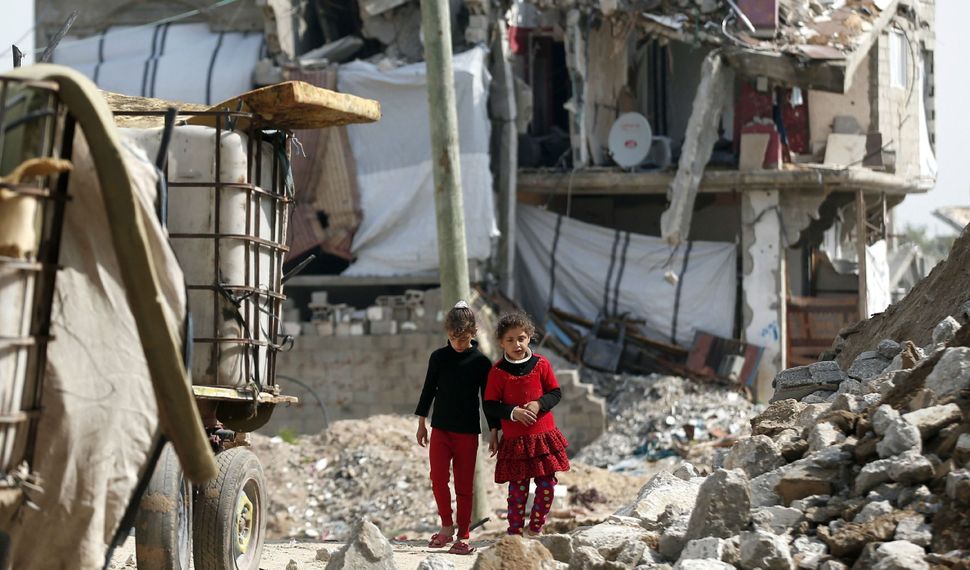 When the Forward sent Naomi Zeveloff to Israel last August to be our first full-time reporter there, the title she went with — Middle East correspondent — was chosen consciously and deliberately.

Israel’s policies and actions in the region have simply grown too intertwined with those of its neighbors for her to cover only Israel, even if that is her top priority. We know that our readers are increasingly sophisticated and deserve a nuanced and expansive report from the region.

READ: Gaza waits for the next war, but the last one hasn’t really ended

Still, choosing Gaza as Naomi’s first reporting destination outside Israel and the occupied West Bank was neither an easy decision, nor an impetuous one.

For all her many talents and experiences, Naomi isn’t a war correspondent, and we were very concerned about how a Jewish woman writing for a Jewish publication would be received and whether we could assure her safety.

So she and Larry Cohler-Esses, the assistant managing editor for news, mulled this over for many months. It was in March that she and Larry started working on the complex planning needed for a reporting trip like this, even though she would be in Gaza less than three days.

I gave my permission somewhere along in the process, having to trust the two of them on the specifics.

We were worried before she left — Naomi didn’t receive her permit to enter Gaza until the night before her scheduled departure — and worried all the time she was there.

For good reason, it turned out. Naomi heard a rocket launched into Israel as she was interviewing a source for one of her stories, a frightening introduction to everyday life in Gaza.

But in another sense, our worries were unfounded. Naomi was welcomed warmly by many of the Palestinians she interviewed. Hasan Zeyada, a psychologist who works with traumatized Gaza children, knew that Naomi was Jewish because she had interviewed him by phone for a previous story.

“When I walked into Zeyada’s house,” Naomi told me, “he wanted me to know that I was welcome in his home as a Jew, which I found very moving.”

She also recounted a similarly welcome reception when she told Omar Shaban of PalThink, a non-governmental organization, and his civil society colleagues, that she represented a Jewish publication.

“They want American Jews to know about the reality in Gaza, and they understand how American foreign policy has the ability to help or hurt Gaza at this critical point in its reconstruction,” Naomi said.

Shaban talked fondly about Gaza in the 1980s and 1990s, when Jews from Israel would shop in Gaza City, and Israelis and Palestinians knew each other not only as enemies, but as human beings.

Many of the Gazans she interviewed worried about how Israel’s repeated military incursions and the blockade are affecting their children’s attitudes toward Jews. Naomi told me about one man whose work takes him back and forth to Israel, and whose comments — anonymously, since he wasn’t authorized by his organization to speak — were so disturbing.

His children want to know if there are humans in Israel. Do they have children, too? Do they point guns at his head when he’s there?

“The only thing they know about Israel is about wars, about destruction, about weapons,” he told her. “I tell them that in Israel there is an army, which is ugly and the occupation. Those are dirty things. But there are still good people, nice people.”

And here’s the really disturbing part: this man’s son, who studies in an American school, didn’t believe him.

“If they are humans like us, why don’t they let us go see them?” the son asked.

Naomi didn’t go to Gaza to talk to political leaders, or to assess blame for the continued depressed and chaotic state of the territory’s economy and its people. Gaza Palestinians themselves blame Israel, but also blame Hamas, the Palestinian Authority and the United Nations for their awful predicament.

She went to do what she does best: report on the human condition.

“My guiding value as a correspondent here,” she told me, “especially when I report on the conflict, is to treat every single person as a human, not a symbol.”

As you see in the story we posted yesterday, and in subsequent pieces from Naomi, we share that philosophy. I’m proud that we are a Jewish publication committed to this kind of empathetic journalism, from all sides of conflict.

I’m proud that we sent Naomi to Gaza.

And honestly, I’m relieved that she’s safely back home.